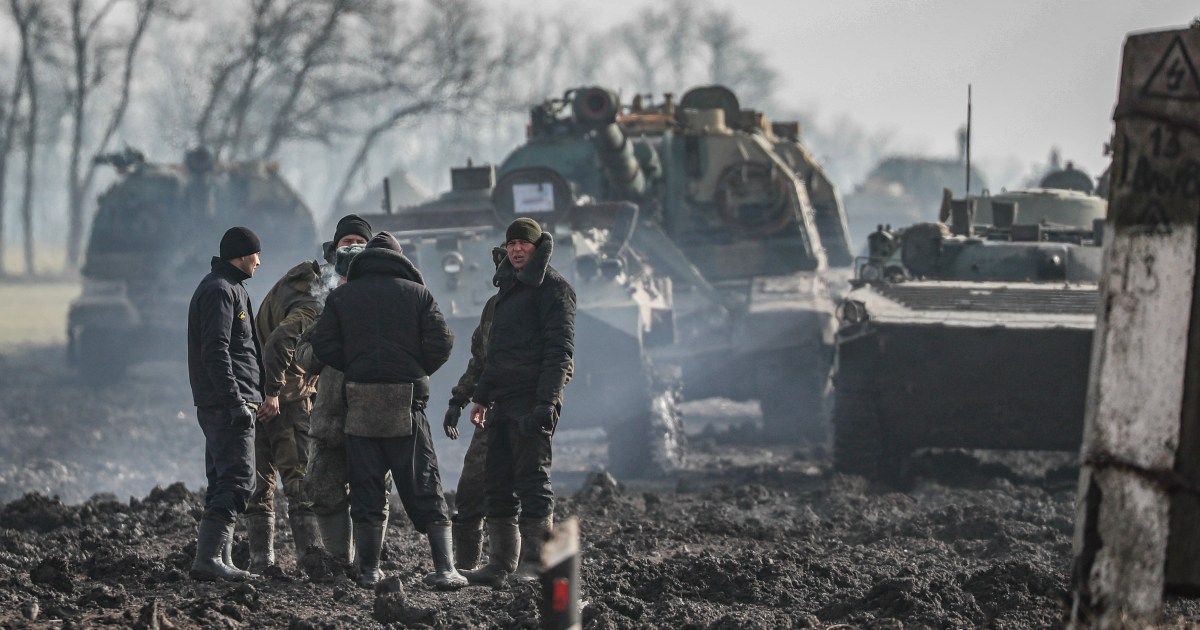 Heavy fighting is under way for Severodonetsk, formerly an industrial city of 100,000 people, and Russian troops are attempting to cut it off.

Fighting raged in eastern Ukraine on Sunday between Russian forces and Ukraine defenders who mounted a defiant attempt to hold the Luhansk region’s main city of Severodonetsk.

The governor of Luhansk region said pitched battles were under way for Severodonetsk, formerly an industrial city of 100,000 people, and Russian troops were attempting to cut it off.

“The heaviest fighting is going on towards Severodonetsk [but] all free settlements in the Luhansk region are hotspots,” Governor Serhiy Haidai wrote on the Telegram messaging app. “Right now, there are shooting battles in [the villages] of Bilohorivka, Voivodivka and towards Popasna.”

Dozens of Ukrainians are feared dead after a Russian air strike destroyed a school sheltering about 90 people in its basement in Bilohorivka village, he said.

The Luhansk governor said the fight for Severodonetsk would be aided by incoming weapons.

“It [new weaponry] is arriving now. Only the military will decide when should they use it. But we can see results even now. And new military supplements can change the course of the war here in Donbas,” said Haidai.

Since failing to capture Ukraine’s capital, Russia has focused its offensive in the eastern Donbas region – including Luhansk and Donetsk – where Moscow-backed separatists have been fighting since 2014 and occupy some territory.

The largest European conflict since World War II has developed into a punishing war of attrition because of the Ukrainian military’s unexpectedly effective defence.

The most intense combat in recent days has taken place in eastern Ukraine. A Ukrainian counteroffensive near Kharkiv, a city in the northeast that is the country’s second-largest, “is making significant progress and will likely advance to the Russian border in the coming days or weeks”, according to the Institute for the Study of War.

However, the Ukrainian army withdrew from Luhansk’s embattled city of Popasna, Haidai said on Sunday, adding troops “moved to stronger positions, which they had prepared ahead of time”.

“Fighters of the Chechen special forces … have taken most of Popasna under control,” Kadyrov, who has often described himself as Russian President Vladimir Putin’s “foot soldier”, wrote in a post on Telegram.

“The main streets and central districts of the town have been completely cleared.”

But Haidai challenged Kadyrov’s comments saying Chechen troops were not taking part in the fighting but instead looting and taking videos.

Kadyrov has frequently posted on Telegram reports and videos of Chechen soldiers allegedly participating in activities in Ukraine, but there has been no confirmation of how many have actually been deployed and whether they have participated in battle.

Haidai pledged the battle for Popasna and elsewhere will continue.

“They move step by step, deeper and deeper. But they are getting only ruins, unfortunately. Now we are waiting for reinforcements and hope to push them back from everywhere,” said Haidai.