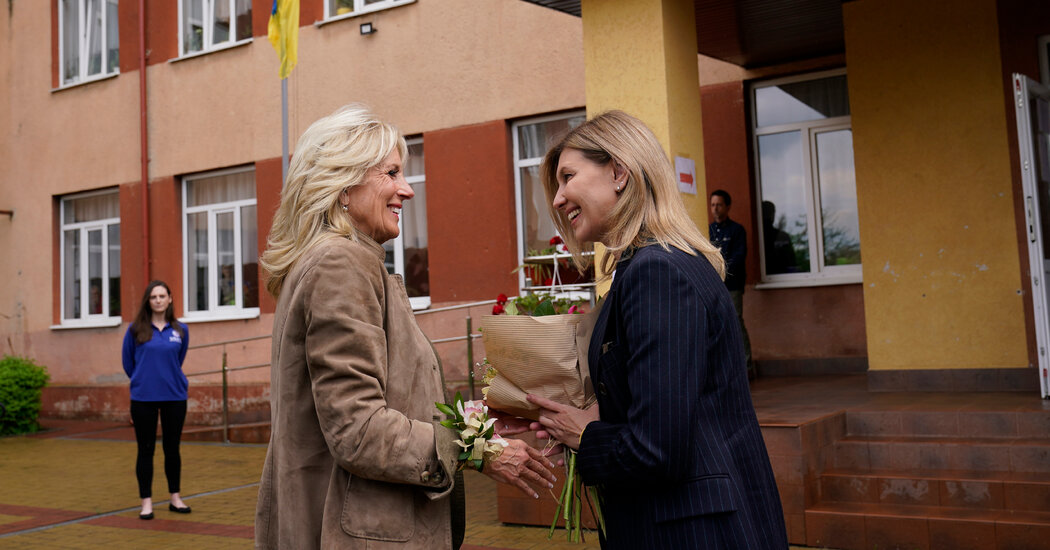 UZHHOROD, Ukraine — Jill Biden, the first lady, traveled to western Ukraine in an unannounced trip on Sunday, the latest show of support from the United States, which in recent weeks has significantly increased military aid for Ukraine and sent others close to President Biden into the country.

Dr. Biden met Ukraine’s first lady, Olena Zelenska, at a school converted to assist refugees who had come from other parts of the country to Uzhhorod, a town of 100,000 people a few miles from the border with Slovakia. Ms. Zelenska, the wife of President Volodymyr Zelensky, had not been seen in public since Russia’s invasion began on Feb. 24.

“I thought it was important to show the Ukrainian people that this war has to stop, and this war has been brutal,” Dr. Biden told reporters as she sat at a table across from Ms. Zelenska, “and that the people of the United States stand with the people of Ukraine.”

Dr. Biden made her trip on a day of public displays of support for Ukraine, with visits from Bono and Prime Minister Justin Trudeau of Canada, and as rescuers searched for survivors from a Russian airstrike on a school in the east that officials feared had left dozens dead. In Kyiv, a team of senior American diplomats returned to the U.S. Embassy for the first time since Russia invaded Ukraine, a move that coincided with Victory in Europe Day.

The day was a patchwork of the hopeful and the foreboding. Her visit also came as Western officials were bracing for the possibility that President Vladimir V. Putin of Russia might use his country’s Victory Day holiday, which falls on Monday, as a reason to intensify attacks on Ukrainian citizens.

Ukrainian officials understand the emotional power of social media and headlines written by the Western press and have invited an assortment of Western officials — and Bono — into the country in recent days. They reached out several days ahead of Dr. Biden’s planned four-day tour of Eastern Europe to suggest a meeting with Ms. Zelenska in Ukraine, according to Michael LaRosa, the first lady’s spokesman.

Such a high-stakes visit is a rarity for any sitting first lady; they do not usually visit war zones, and the last one to travel to one alone was Laura Bush, who visited Afghanistan in 2008. Dr. Biden, an English professor who teaches full time, has so far spent much of her time as first lady traveling the United States, urging Americans to take vaccines and support community colleges, or touting Mr. Biden’s plans for social spending.

Until now, she has had comparatively little to say about Ukraine, but her full-throated call for an end to the war on Sunday was a departure that reflected the bolder and broader steps the Biden administration has taken to move against Russian aggression without engaging Moscow in an all-out war.

It also appeared to be an opportunity for the first lady — who, like many before her, has positioned her identity as a mother as a central one — to use her office to highlight the reality of the war in Ukraine: As many as 90 percent of the people who have been displaced are women and children, according to United Nations figures.

Ms. Zelenska, 44, was among the first to be displaced when the war began.

In a speech only days after the first Russian missiles fell on Kyiv, Ukraine’s capital, Mr. Zelensky said he knew he was the first target for assassination in case of an occupation. His wife and children, Oleksandra, 17, and Kyrylo, 9, he said, are “target No. 2.” Since then, her whereabouts has been kept private.

A first lady who once focused on issues of female empowerment, literacy and culture in Ukraine, Ms. Zelenska, like her husband, now spends much of her time trying to bring the world’s attention to what is happening in her country. She wrote to Dr. Biden in April, expressing her concerns for the emotional well-being of the citizens of Ukraine, Mr. LaRosa said.

Her concerns appeared to have been received by Dr. Biden, who spent much of her time in front of the cameras quizzing humanitarian organization workers on their capacity to support women and children who had endured the trauma of war.

At stop after stop, in Romania and in Slovakia and later in Ukraine, Dr. Biden talked to children who had circles of exhaustion under their eyes and mothers who were on the verge of tears. She stood among bottles of baby formula and well-worn toys and asked whether volunteers had what they needed.

Allida Black, a historian who studies first ladies, said Dr. Biden’s work was in the tradition of other first ladies who had traveled oversees to witness the “personification of pain,” hearing stories of trauma and war, all while staying within the limits of an unelected role within the administration.

“There’s real finesse to this,” said Dr. Black, who has been an adviser to Hillary Clinton. “Because you’ve got to carry all of those memories with you. It’s hard work.”

Before stopping in Ukraine on Sunday, Dr. Biden traveled to the Slovakian city of Kosice, where she met with refugees at a bus station that had been converted to assist new arrivals to the country.

There a woman named Viktozie Kutocha clutched her daughter, Yulie, and told the first lady that she struggled to explain to her child what had happened to their lives.

“How I can explain this to child? It’s impossible,” she said. “I try to keep them safe. It’s my mission.”

After crossing the border into Ukraine, she was driven for about 15 minutes to the parking lot of a school building. Ms. Zelenska quietly slipped out of a vehicle to greet her.

“We understand what it takes for the U.S. first lady to come here during a war, where the military actions are taking place every day, where the air sirens are happening every day, even today,” she told Dr. Biden.

During a private meeting, the two women discussed their concerns over the war and also spoke about their personal lives. (At one point, Ms. Zelenska asked the first lady how she was able to travel if she worked full time as a teacher. Dr. Biden told her that she had just finished grading final exams and that the semester was over.)

Their two-hour visit to the school was meant to be focused on children and the humanitarian work that went into housing some 160 refugees, 47 of them children, in the building, but even the most innocent interactions betrayed the strain of war: A security agent passed a hand-held metal detector over a child who had entered a classroom just before Dr. Biden and Ms. Zelenska entered.

Dr. Biden spent about two hours in Ukraine before crossing back into Slovakia, but before she said goodbye, she slipped a pocket-size medallion, called a challenge coin, into the hands of one of Ms. Zelenska’s bodyguards. The man took a Ukrainian flag pin from his lapel and handed it to her.

Mr. Biden traveled to Poland for three days at the end of March. While he visited troops near the border with Ukraine, he stopped short of entering the country because of security concerns.

Shortly after she departed the school in Ukraine, the first lady called her husband, who was home in Wilmington, Del., from her motorcade.

On Monday, Dr. Biden plans to meet with Zuzana Caputova, the president of Slovakia, in Bratislava, the country’s capital, before returning to Washington.