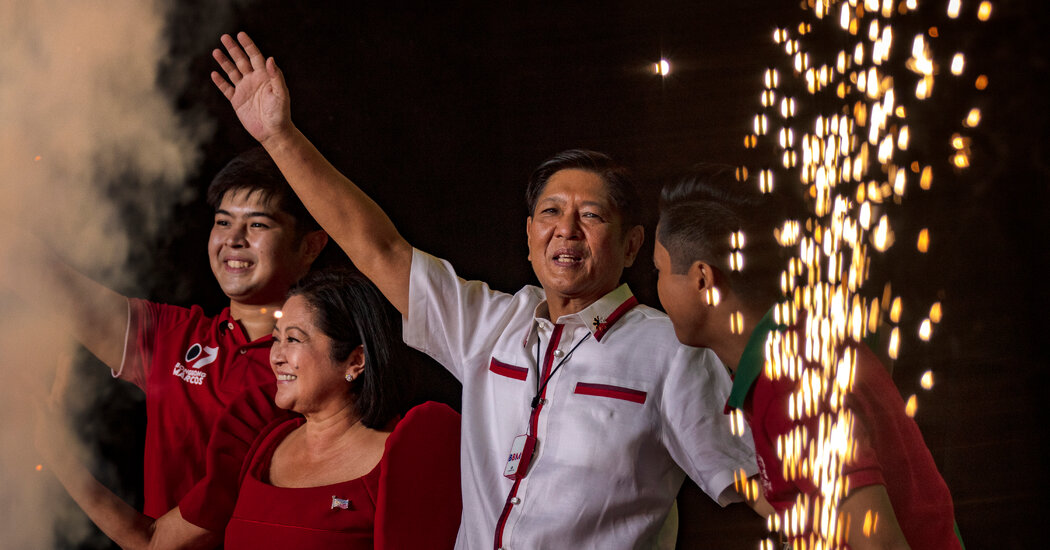 MANILA — Ferdinand Marcos Jr., the son and namesake of the former Philippines dictator, appeared sure to win the country’s presidential election on Monday, with a commanding vote margin that heralded a remarkable revival for a family once forced into exile, but that also raised profound questions about the future of Southeast Asia’s oldest democracy.

With 90.1 percent of the election returns counted in a preliminary tally as of 1:47 a.m. Tuesday Manila time, Mr. Marcos had 28.8 million votes, more than double that of his closest rival, Leni Robredo, the current vice president.

That put him on the path for the biggest margin of victory in a presidential race in the Philippines since the 1980s, when Corazon Aquino was elected in the wake of the ouster of Mr. Marcos’s father by the “People Power” uprising by millions of Filipinos denouncing corruption and repression. The elder Mr. Marcos died in exile in 1989.

In 1991, the Marcoses were allowed to return to the Philippines. Ferdinand Marcos Jr. soon began working to rehabilitate the family name and begin a new rise to political influence, winning key leadership roles at the state level before entering national politics as a senator in 2010.

Today, Mr. Marcos, who is 64, is being backed by millions of voters who have grown disillusioned with their country’s brand of democracy and its failure to address the basic needs of its citizens. Poverty is widespread, inequality has widened and corruption remains rampant.

But his opponents fear that as president, Mr. Marcos will only deepen the culture of impunity enshrined by the departing Mr. Duterte, who personally worked to aid a Marcos comeback during his years in power.

Pollsters said the support for Mr. Marcos directly correlated with President Rodrigo Duterte’s base. Mr. Marcos’s supporters saw in him a glimmer of Mr. Duterte, whose strongman rule remains largely popular in the Philippines. Many of them backed Mr. Marcos because Sara Duterte, Mr. Duterte’s daughter, ran for vice president on his ticket. She appeared set to clinch the vice presidency, with 24.4 million votes, more than triple that of Senator Francis Pangilinan, who ran in support of Ms. Robredo.

But by the time polls closed at 7 p.m., accounts of alarming irregularities had been reported across the country: malfunctioning voting machines, insufficient numbers of backup machines, complaints that voters had been left off registration rolls, and that their ballots had been tampered with.

Still, Mr. Marcos’s lead was so strong by the end of Monday night that it appeared nearly inevitable that he would be the winner.

A victory for Mr. Marcos is likely to lead to democracy regressing further in the Philippines, where institutions have been obliterated or weakened under Mr. Duterte. Impunity could prevail — Mr. Marcos, who is known by his boyhood nickname “Bongbong,” has indicated that he would shield Mr. Duterte from an investigation by the International Criminal Court for a violent drug war that has claimed thousands of victims.

Critics fear that Mr. Marcos, who has repeatedly said he would not apologize for his father’s legacy, could also dismantle the agency set up to investigate the government money his family is accused of stealing. His campaign spent years in an effort to recast a period of dictatorship as one of development.

“Personally, I’m devastated,” said Sol Iglesias, an assistant professor of political science at the University of the Philippines Diliman. “This is a dashing of the hopes that there will be a U-turn away from the backsliding toward authoritarian rule that was begun by President Duterte.”

Late on Monday night, spontaneous celebrations erupted outside Mr. Marcos’s campaign headquarters on the EDSA boulevard, where huge crowds of Filipinos had gathered in peaceful protest against his father more than three decades ago. Supporters sang a martial law anthem, waved the Philippines flag and chanted: “Bongbong, Sara!”

In a speech to his supporters on Monday night, with days of official vote counting ahead, Mr. Marcos urged patience.

“It’s not over yet,” he said. “Let us keep watch over our votes. And if I do get lucky, I am hoping for your unending help and trust.”

But the Marcos name remains tarnished among many Filipinos who see the family as a symbol of greed and excess, accused by the government of looting as much as $10 billion from the treasury. The “People Power” revolt was seen as a model for many other countries with fledgling democracy movements.

“It’s extremely disappointing to see where we are at this stage in the game,” said Cleo Anne A. Calimbahin, an associate professor of political science at the De La Salle University-Manila.

Mr. Marcos will face a range of challenges presiding over a divided country. He has campaigned on a platform of unity, promising Filipinos that he would “help them rise again.” But many of his policy proposals remain thin and he has shunned most of the news media and avoided nearly all debates.

On Ms. Robredo’s side, hundreds of thousands of people, many of them young, campaigned door to door for her in an unprecedented grassroots movement and flocked to her rallies, seeing in her a leader who could bring about change.

Ultimately, they struggled against a powerful political family that was adept at building alliances and avoiding any semblance of accountability. Just five years after Mr. Marcos’s family was forced to flee, the government allowed his family to return to the Philippines. They continued building their fiefdom in the northern province of Ilocos Norte, the family’s stronghold. Imelda Marcos, Mr. Marcos’s 92-year-old mother, twice ran unsuccessfully for president in the 1990s.

Mr. Marcos served as vice governor, governor and congressman in Ilocos Norte for most of the period between the 1980s and 2010. That year, he entered the national political scene when he was elected senator. He ran for the vice presidency in 2016 and lost narrowly to Ms. Robredo by just over 260,000 votes.

Mr. Marcos also drew support from the young, who say they enjoy watching his YouTube videos portraying him as a cool parent in game-show segments with his family. A survey has shown that seven out of 10 Filipinos aged 18 to 24 want him to be president. The country’s textbooks gloss over the atrocities of the Marcos era.

“I think he can solve everything,” said Chereen Nicole Rivera, a 21-year-old student who was celebrating Mr. Marcos’s win. “The money stolen was not by him, but by his dad. He should not be judged by the sins of his dad.”

Critics fear that Mr. Marcos, as president, could influence the courts to overturn the criminal convictions against himself and his mother, and the outstanding cases against his family. Mr. Marcos was sentenced to up to three years in prison in 1995 for tax-related convictions, but his sentence was overturned on appeal two years later, even though his conviction remains on the books. In 2018, his mother was sentenced to up to 11 years in prison for creating private foundations to hide her unexplained wealth. She posted bail, and the Supreme Court is still reviewing her appeal.

Separately, the government is still demanding that the Marcoses pay an estate tax of at least $3.9 billion, which Mr. Marcos has dismissed as “fake news.”

Mr. Duterte, an ally of the Marcoses, had paved the way for a full rehabilitation of the Marcos name. In 2016, he allowed for the father’s body to be moved to the Philippines’ equivalent of Arlington National Cemetery, despite protests. And it was not until Sara Duterte made the surprise announcement that she would run for vice president instead of president that Mr. Marcos gained his large lead in the polls.

The alliance of the Marcoses and the Dutertes “has effectively formed a dynasty cartel,” said Aries Arugay, a professor of political science at the University of the Philippines Diliman.

“When you have a collusion of this at this level, then they might be able to cooperate to the extent that it will just be another Duterte, another Marcos for decades and decades to come,” Professor Arugay said.

“The Philippines is heading more and more towards an electoral autocracy, an authoritarian regime that has the semblance of ‘democratic elections’ that will just keep on electing dynasties into power.”