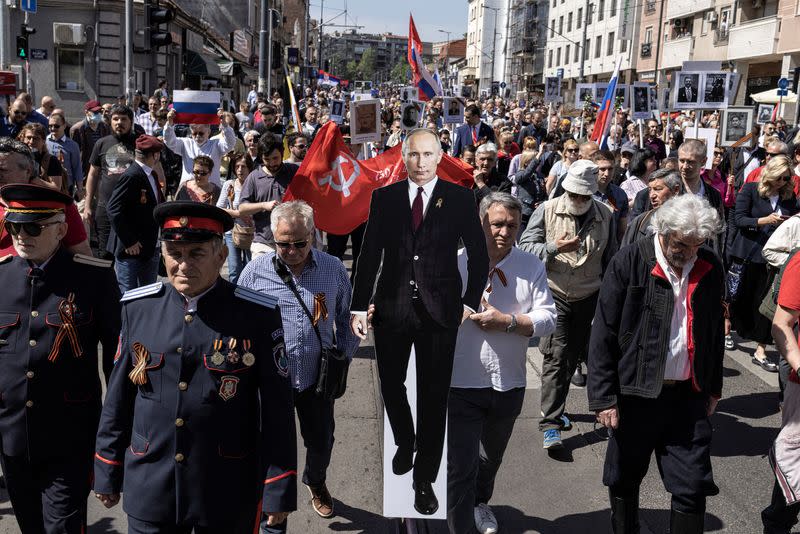 BELGRADE (Reuters) – The Russian national anthem was played in Belgrade on Monday as hundreds of Serbians, including senior government officials, assembled for Victory Day, showing the political strain of a country long aligned with Moscow but now trying to join the EU.

At a march to pay homage to Serbian and Soviet troops who died in World War Two, someone held a giant letter Z – symbol of Russia’s invasion of Ukraine – and someone else had brought a life-size cardboard cut-out photo of President Vladimir Putin.

Serbia, which was bombed by NATO two decades ago and has had close cultural ties with Russia for centuries, has fended off pressure to take sides since Russia invaded Ukraine, including calls from the West that it join sanctions against Moscow.

Several hundred people holding pictures of ancestors who fought in World War Two gathered in late morning on Monday in a city park to march to a cemetery.

“I am extremely sad today because of the divisions we witness both in the country and abroad. Divisions between those who support the West and those who support Russia,” said Miroslav Milutinovic, 70, a retired mechanical engineer who held a picture of his father.

The national anthems of Russia, Azerbaijan, Kyrgyzstan, Belarus and Serbia were played as ambassadors and ministers laid wreaths at a memorial. Ukraine’s ambassador had laid wreaths the previous day, with no Serbian officials present.

President Aleksandar Vucic, a former nationalist who has become a strong supporter of EU membership, was re-elected last month after campaigning to make the EU bid a priority. A new cabinet, still due to be formed after last month’s election, is expected to exclude openly pro-Moscow political figures.