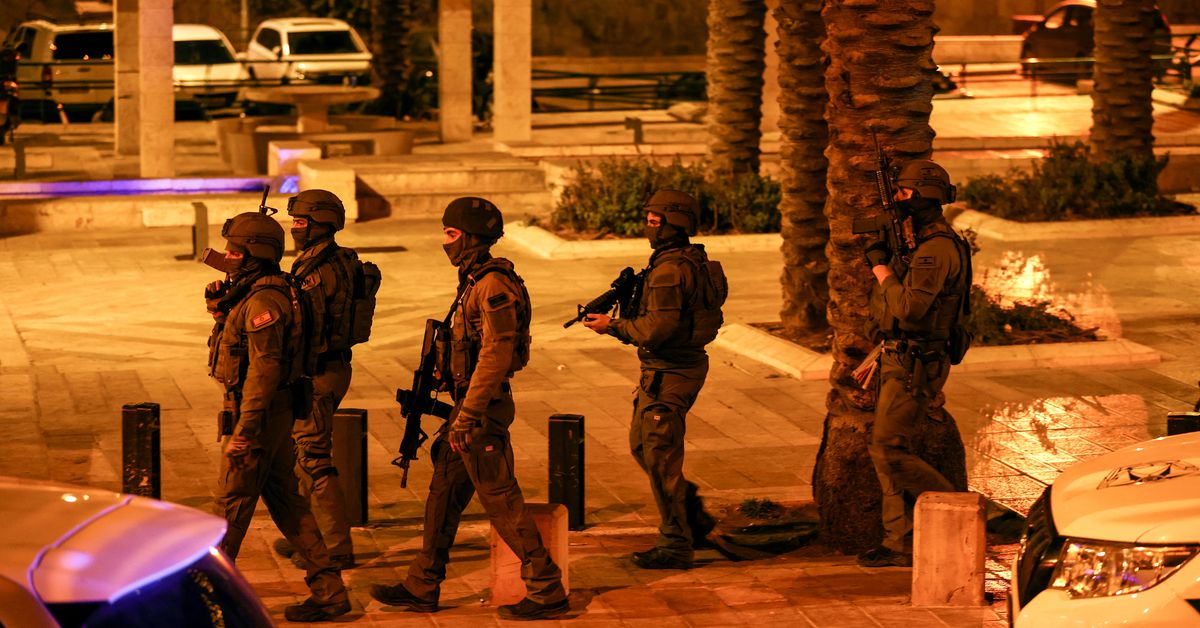 JERUSALEM, May 8 (Reuters) – Israeli soldiers shot dead a Palestinian near the barrier with the West Bank and another was killed after infiltrating a Jewish settlement inside the occupied territory with a knife on Sunday, the Israeli army said, stoking worries a wider conflict may loom.

The incidents, along with the stabbing of a policeman in Jerusalem, came hours after Israeli forces caught two Palestinians who were suspected of sneaking into Israel and killing three people in the ultra-Orthodox Jewish town of Elad on Israel’s Independence Day last Thursday. read more

Israel’s army said the shooting of the Palestinian near the West Bank barrier on Sunday occurred after “soldiers spotted a suspect who attempted to illegally cross the security fence” in the area of the town of Tulkarm.

“The soldiers operated to stop the suspect in accordance with standard operating procedures, using live fire,” according to an army spokesperson.

The Palestinian Health Ministry said the man was killed.

Hours later, the army said a civilian shot a knife-wielding Palestinian who had broken into the Tekoa settlement in the West Bank. The Palestinian Health Ministry said a 17-year-old Palestinian was killed at the scene.

Also on Sunday, Israeli police said a Palestinian stabbed one of their officers outside Jerusalem’s Old City and was shot. Both were being treated for their wounds.

The killing of three people in Elad on Thursday had led to a three-day manhunt by Israeli forces for two axe-wielding assailants who had run through the town, some 15 km (nine miles) north of Tel Aviv.

The two men were captured on Sunday in a forest near Elad, the Israeli army said. They have been identified by Israel as residents of a village near the Palestinian city of Jenin in the West Bank.

Israeli soldiers secure the area around Damascus gate to Jerusalem’s Old city, following an incident by the gate, May 8, 2022. REUTERS/Ronen Zvulun

Photos of the two, who appeared to be unhurt, and of Israeli security men with guns pointed at their hiding place, were carried by Israeli news websites after they were taken into custody.

Since March, Palestinians and members of Israel’s Arab minority have killed 18 people, including three police officers and a security guard, in attacks in Israel and the West Bank that have mostly targeted civilians.

Israel has carried out arrest raids in Palestinian towns and villages which have often sparked clashes and brought the number of Palestinians killed by Israeli forces or armed civilians since the beginning of the year to at least 42.

The casualties include armed members of militant groups, lone assailants and bystanders.

Hamas, the Islamist group that controls Gaza, praised the Elad assault. It said the attack was a response to Israeli actions at Al-Aqsa Mosque compound in Jerusalem.

Over the past month, Palestinians and Israeli police have repeatedly clashed at the sensitive complex.

Palestinians and Jordan, the custodian of the site that is the third holiest in Islam, accuse Israel of not doing enough to enforce a long-standing ban on non-Muslim prayer there, which Israel denies.

The compound is Judaism’s holiest site and the vestige of two ancient Jewish temples.

Israel captured the West Bank, Gaza and East Jerusalem in the 1967 Middle East War. Palestinians seek these territories for a future state.