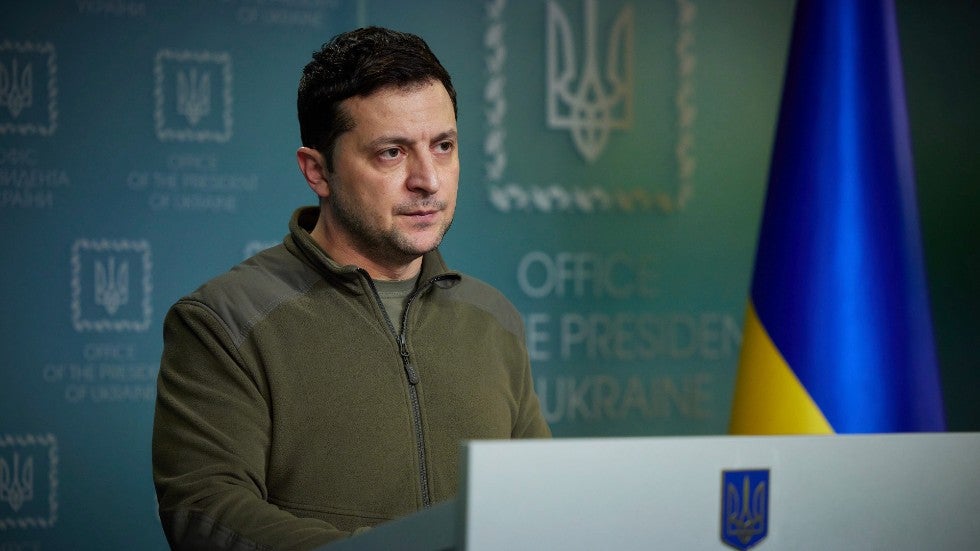 “On February 24, the word ‘never’ was erased. Shot and bombed. By hundreds of missiles at 4 a.m., which woke up the entire Ukraine. We heard terrible explosions. We heard: again!” he added.

He said Russia has “amputated” the word “never” from the phrase, which is linked to the Holocaust, in February when its invasion of Ukraine began.

“The word ‘never’ was dropped from this slogan. Amputated during the so-called special operation. They stabbed a knife in the heart and, looking into the eyes, said: ‘It&#8217;s not us!’ Tortured with the words ‘not everything is so unambiguous.’ Killed ‘Never again’, saying: ‘We can repeat,’” he said.

Zelensky, who is Jewish, continued, saying that “decades after World War II, darkness returned to Ukraine. And it became black and white again. Again!”

“Evil has returned. Again! In a different uniform, under different slogans, but for the same purpose. A bloody reconstruction of Nazism was organized in Ukraine,” he added.

Russian Foreign Minister Sergey Lavrov drew criticism in recent days when he said Adolf Hitler had “Jewish origins” and that “the wise Jewish people say that the most ardent antisemites are usually Jews.”

Zelensky, in his remarks on Sunday, called in Ukrainians to “pay homage to all those who defended their homeland and the world from Nazism” on this year’s Day of Remembrance and Reconciliation.

“We note the feat of the Ukrainian people and their contribution to the victory of the anti-Hitler coalition,” he added.

He also expressed hope of restoring peace in Ukraine.

Canada’s Trudeau says Putin ‘can only lose’ in Ukraine Mexico says no country should be left out of Americas summit, rebutting US

“We will overcome everything. And we know this for sure, because our military and all our people are descendants of those who overcame Nazism. So they will win again. And there will be peace again. Finally again!” Zelensky said.

“We will overcome the winter, which began on February 24, lasts on May 8, but will definitely end, and the Ukrainian sun will melt it! And we will meet our dawn together with the whole country,” he added.