Crippled but alive, Prime Minister Naftali Bennett’s governing coalition staved off a major opposition challenge Monday as the Knesset reconvened for its summer session, showing it still has some muscle and seeking to disprove predictions of its imminent collapse.

The session opened with two no-confidence motions put forward by the opposition, both of which fell well short of the necessary support needed to remove Bennett’s coalition from power.

A Likud-proposed measure only attracted 52 votes in favor, versus 61 against, while a separate Shas-backed motion was similarly unsuccessful, with 52 for and 56 against.

The no-confidence motions would have been embarrassing to the government, but limited in effect, as the opposition lacks 61 votes necessary to reseat the government.

While the opposition may express its lack of confidence in the government by a simple voting majority of MKs present, it can only reshuffle the government from within the current Knesset by passing an additional bar, called constructive no-confidence.

Ahead of the vote, the measures were thought to have a good chance of winning a symbolic simple majority, thanks to fractures within the coalition, which has been riven by defections from right-wing MKs and the Islamist Ra’am party freezing cooperation over Jerusalem tensions. 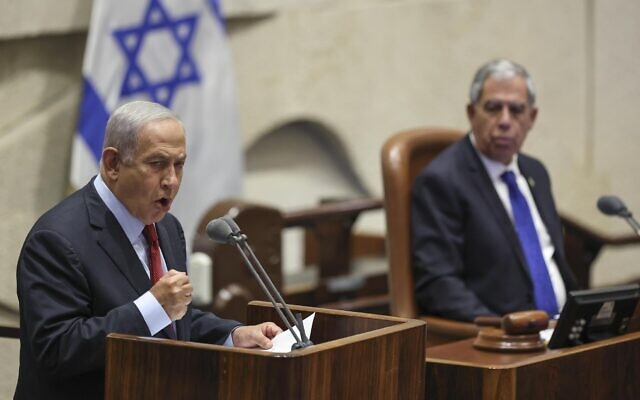 Opposition leader Benjamin Netanyahu speaks during a no-confidence motion against the government at the Knesset, May 9, 2022. (Yonatan Sindel/Flash90)

Yamina MK Idit Silman, who plunged the coalition into a tailspin when she resigned from it last month, was absent from the vote. Renegade MK Amichai Chikli, who was ousted from Yamina two weeks ago, similarly was not present. Chikli has previously expressed intent to appeal his removal from Yamina – which carries significant consequences for his personal political career – and may have refrained from the vote to avoid voting against the coalition.

But contrary to Chikli, Silman has sought not to burn her ties with Yamina and even attended the faction’s meeting on Monday.

Islamist Ra’am, still in the midst of a three-week freeze from voting with the coalition, similarly did not attend, denying the coalition its 4 votes.

However, the six-member, majority-Arab Joint List party actively helped to derail the Likud-led measure, with its MKs either voting against it or not being present in the plenum. It also abstained from the Shas initiative. Channel 12 reported that two of the Joint List MKs are weighing voting with the coalition to down the preliminary reading of a bill aimed at dissolving the Knesset that is slated to be submitted on Wednesday.

To use a vote of no-confidence to change the government, lawmakers must propose an alternative government to the current one, which then must win the support of at least 61 Knesset members, and not just the simple majority of those in attendance that a declarative vote requires. The Likud proposal was thought to include a clause making opposition leader Benjamin Netanyahu prime minister.

In the debate leading up to the vote,  Netanyahu attempted to rally the opposition, taunting Bennett that “Naftali, it’s over.”

“The physics of politics cannot be deceived. It’s over, Naftali. Your government has ended its short and rotten career,” Netanyahu said from the podium.

“My friends and I will get Israel back on track,” added the former prime minister. “You guys spoiled it — we’ll fix it. With God’s help, in a short time, we will establish a strong national government headed by the Likud, we will ensure security, we will restore power, we will ensure prosperity for all Israeli citizens.”

Netanyahu also attacked the coalition for partnering with Ra’am, claiming it forces the government to kowtow to Hamas leaders and the Shura Council, an advisory body that is part of Ra’am’s umbrella religious movement. 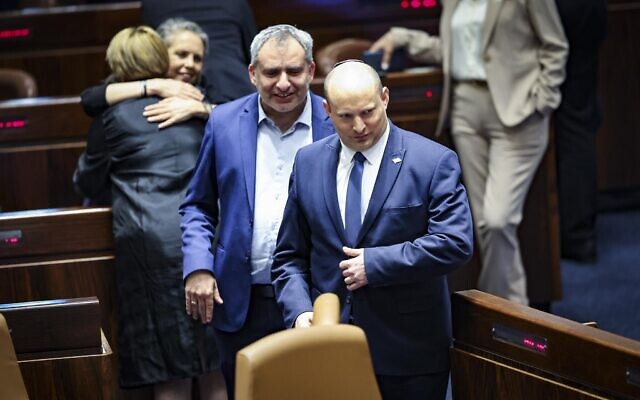 Providing the government’s response, Housing and Construction and Jerusalem and Heritage Minister Zeev Elkin noted that Netanyahu previously negotiated with Ra’am to join a potential coalition under his leadership before the arrangement was torpedoed by Religious Zionism leader MK Bezalel Smotrich.

“I asked myself whether MK Netanyahu raises a phone each morning and says ‘Thank you so much, Betzalel, my friend, you saved me.’ Because if MK Netanyahu is correct in his description, this is exactly the government he tried to form, just a year ago,” Elkin said.

In the debate before the vote, Joint List MK Ahmad Tibi said that his party was planning to support the coalition’s economic and crime-fighting in Arab society legislation, also slated for a vote Monday. Coalition leaders decided to focus on non-contentious economic and social issues on its first legislative day back.

However, he said, issues like cost of living and the Negev are at the heart of the Joint List’s interests, along with Al-Aqsa.

The Joint List has vacillated in recent weeks on whether or not the faction — itself made up of three separate parties — would cooperate with the flagging coalition to support specific pieces of legislation. 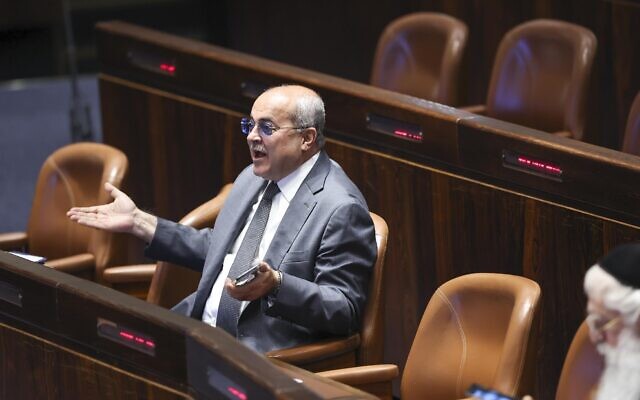 Joint List MK Ahmad Tibi during a Knesset discussion on a no-confidence motion against the government, May 9, 2022. (Yonatan Sindel/Flash90)

The opposition may employ a second tactic this week to put pressure on the government, by bringing forth a law to disperse the Knesset on Wednesday. As a private bill, the law would need to pass a simple majority on its preliminary reading, or be forcibly tabled for the next six months.

Should a law to disperse the Knesset and force snap elections to be brought and preliminarily passed on Wednesday, it would then travel to a Knesset committee, before preparations for three additional votes. Only if it were to pass its third reading, or fourth vote, with the support of at least 61 MKs, would the Knesset dissolve and new elections be scheduled.

After coming out on top in both votes, Bennett and Lapid taped a joint statement in which they laughed off speculation that their coalition was going to fall apart on the first day of the summer session. “Everyone said, ‘On Monday you’ll see everything will fall apart.’ Then Monday came and we won both votes,” Lapid cracked.

“That’s correct,” Bennett responded. “We’re going to continue with these victories and maintain this excellent government on behalf of the citizens of Israel.”

Sorgente articolo:
Coalition fends off no-confidence challenges as Knesset gets back to work – The Times of Israel