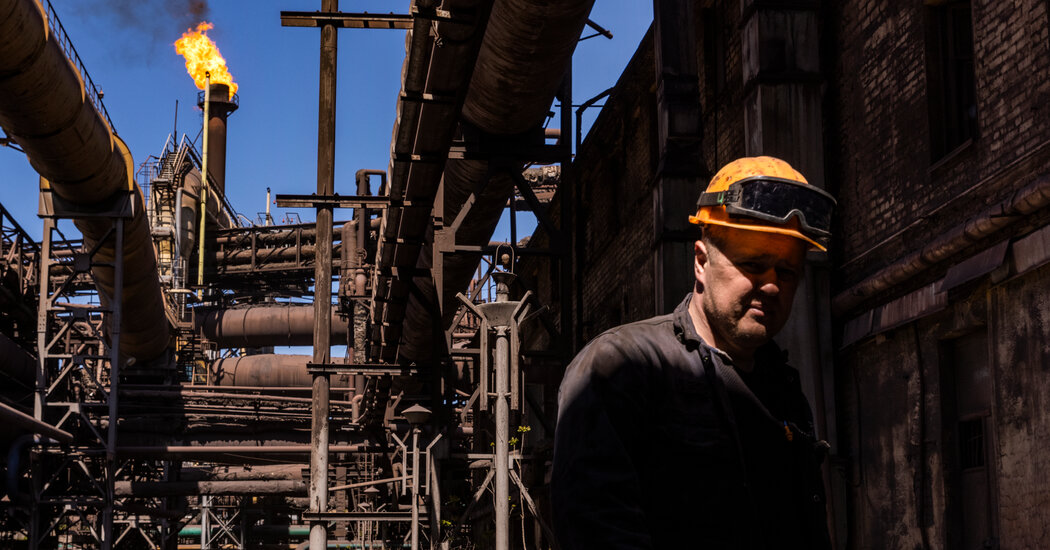 WASHINGTON — The Biden administration announced on Monday that it would lift tariffs on Ukrainian steel for one year, halting a measure that President Donald J. Trump placed on that country and many others in 2018.

The move comes as the Biden administration looks for ways to assist Ukraine during the Russian invasion. Ukraine is a fairly minor supplier of U.S. steel, shipping about 218,000 metric tons in 2019, to rank 12th among America’s foreign suppliers. However, the sector is a significant source of economic growth and employment for Ukraine, and steel mills have continued to provide paychecks, food and shelter for their workers through the war.

When Prime Minister Denys Shmyhal of Ukraine visited Washington last month, he told administration officials that some Ukrainian steel mills were starting to produce again after initially shutting down because of the invasion. He asked the Biden administration to suspend the tariffs, a senior Commerce Department official, who was not authorized to speak publicly before the official announcement, said on Monday.

Ukraine is a significant steel producer, ranking 13th globally. Most of the country’s factories and other economic activity have been frozen as workers are called off to fight and shipments of parts and raw materials are disrupted during the war. Many major Ukrainian steel mills halted their operations in late February because of major disruptions to logistics routes required to ship metal out of the country, analysts at S&P Global said.

The senior Commerce Department official said that Ukrainian steel plants had been cut off from some of their more traditional markets in the Middle East and Africa, as the war closed shipping lanes through the Black Sea. In order to continue to support its plants, the Ukrainian government is now aiming to move steel by rail to Romania, and then on to markets in Europe, Britain and the United States, the official said.

The Commerce Department has noted that the steel industry is uniquely important to Ukraine’s economic strength, employing one in 13 people there.

A steel mill in Mariupol under siege by Russian forces sheltered thousands of Ukrainian soldiers and civilians for weeks. Russian and Ukrainian officials said on Saturday that all the women, children and elderly people who had been trapped for weeks in the plant were evacuated.

“For steel mills to continue as an economic lifeline for the people of Ukraine, they must be able to export their steel,” Gina M. Raimondo, the commerce secretary, said in the announcement. “Today’s announcement is a signal to the Ukrainian people that we are committed to helping them thrive in the face of Putin’s aggression, and that their work will create a stronger Ukraine, both today and in the future.”

The move is one of a variety of economic measures aimed at penalizing Russia and assisting Ukraine. Those include a broad swath of sanctions on Russian entities, export controls that have limited Russian imports and $3.8 billion in arms and equipment for the Ukrainian government, in addition to other direct financial assistance.

Senators called on the administration last month to lift the steel tariffs, saying it would help the industry bounce back immediately after the war.

“Lifting the U.S. tariff on steel from Ukraine is a small but meaningful way for the U.S. to signal support for Ukraine and to provide stability,” Senators Patrick J. Toomey, Republican of Pennsylvania, and Dianne Feinstein, Democrat of California, wrote in a letter.

Many other major steel-producing countries have had their tariffs lifted or eased. During his presidency, Mr. Trump negotiated deals with South Korea, Mexico, Canada and other countries to replace the tariffs with quotas or so-called tariff rate quotas, which restrain the volume of a product coming into the United States but allow at least some of it to be imported at lower tariff rates.

In recent months, the Biden administration has negotiated deals with the European Union, Britain and Japan to ease metal tariffs while still maintaining some protections that domestic steel makers have called for.

The Commerce Department official said that the administration did not want to subject Ukraine to a similar extended negotiation to change the tariffs at this time, but that it would be ready to discuss a further arrangement after the one-year suspension expired.

Lawmakers and industry executives applauded the move, though some importers and other trade proponents said the changes should be made permanent.

“Removing the Section 232 tariffs is an appropriate and welcome move from the Biden administration that makes clear our primary concern is with China’s overcapacity, not the people of Ukraine,” said Senator Ron Wyden, Democrat of Oregon.

The Coalition of American Metal Manufacturers and Users, which represents more than 30,000 companies in the manufacturing sector and downstream industries, said the steel and aluminum tariffs were exacerbating supply chain issues and making it harder for domestic manufacturers to obtain raw materials to meet demand.

“The war in Ukraine underscores the irony of maintaining the ‘national security’ tariffs on steel and aluminum imports imposed by the Trump administration in 2018 on our close allies as the United States seeks to build a global coalition to confront Russia’s aggression,” the group said in a statement.