The Palestinian Authority said on Thursday it had refused Israel’s request to conduct a joint investigation into the death of Al Jazeera journalist Shireen Abu Akleh.

“Israel requested a joint investigation and the handing over of the bullet that assassinated the journalist Shireen, and we refused that, and we affirmed that our investigation would be completed independently, and we will inform her family, America, Qatar and all official authorities of the results of the investigation,” Palestinian Authority Civil Affairs head Hussein al-Sheikh said on Twitter.

The official added the claim that “all indications, evidence and witnesses confirm her assassination by Israeli special units.”

“Those who have nothing to hide do not refuse to cooperate,” Israel’s Army Radio quoted unnamed Israeli officials saying in response.

Added Israel’s Communications Minister Yoaz Hendel: “Anyone who claims the IDF killed the journalist is not doing so on the basis of an investigation or facts, but propaganda. We have said that we will investigate, and that’s what we’re doing — directly and honestly.”

Abu Akleh, 51, was shot in the head during clashes between Israeli troops and Palestinian gunmen while covering an Israeli army operation in the West Bank city of Jenin on Wednesday. The Palestinians blamed Israel for her death, while Israeli officials said Palestinian gunmen may have fired the fatal shot.

Channels 12 and 13 reported on Wednesday that both sides were in contact to conduct a ballistic analysis of the bullet in order to determine whether she was killed by Israeli or Palestinian gunfire.

Channel 12 reported that the bullet in question is a 5.56×45mm NATO round, which is used by both Israeli troops and Palestinian terrorists for weapons, including M16 and M4 assault rifles. 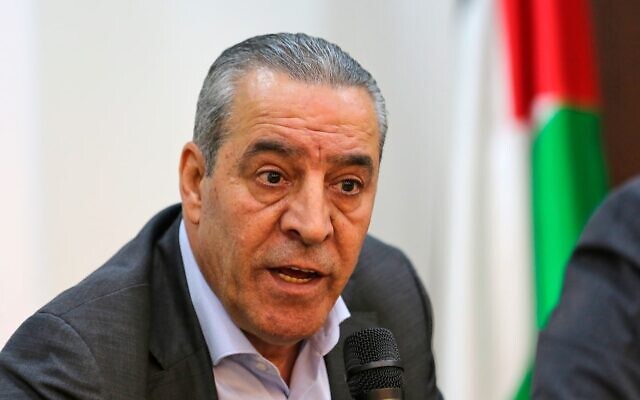 Several Israeli officials called on the Palestinians on Wednesday to conduct a joint investigation, with several Hebrew news sites reporting that the US had been mediating between Jerusalem and Ramallah.

An initial autopsy of Abu Akleh’s body by Palestinian coroners found that it was “not possible” to tell whether she was killed by Israeli or Palestinian gunfire.

“The bullet that entered her body is in our possession and has been taken to the lab for further analysis,” said the head coroner, Dr. Ryan al-Ali of the Pathological Institute at a-Najah University in Nablus.

Al-Ali emphasized that the findings were only preliminary and that it could not be definitively determined from how far away the bullet was shot, but that it was not from close range.

He also said that Abu Akleh died from the bullet wound itself, and not from loss of blood or any other injury.

Meanwhile, an initial, internal IDF probe reportedly found that though she was likely standing near armed terrorists, Israeli troops did not fire at her.

The troops from the elite Duvdvan unit have said that they did not see Abu Akleh or fire at her, the Walla news site reported, adding that troops responded with precise gunfire, which was determined by the number of rounds fired and their location.

Abu Akleh was set to be buried in Jerusalem on Friday. 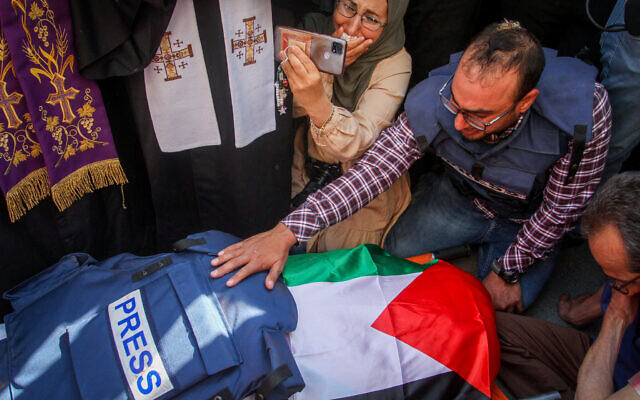 Mourners carry the body of Al Jazeera journalist Shireen Abu Aqleh who was killed during a raid of Israeli security forces earlier today, in the West Bank city of Jenin, May 11, 2022. (Nasser Ishtayeh/Flash90)

Her death came amid soaring tensions in the West Bank in recent weeks. Palestinian terrorists, many from the Jenin area, have crossed the fence into Israel to commit terror attacks, part of a bloody wave of violence that has left 19 people dead in Israel and the West Bank since late March.

Israeli forces have responded by stepping up raids and arrests in an attempt to restore order, and stepping up patrols along the West Bank border. The security operations have often led to armed clashes with Palestinians.

According to the Palestinian Authority health ministry, 30 Palestinians have been killed by Israeli troops since late March. Some committed violent terror attacks, while others participated in clashes with soldiers, and some appeared to have been unarmed bystanders.

Defense Minister Benny Gantz said Wednesday that Abu Akleh’s death will not stop Israel from carrying out counter-terror operations in the West Bank.

“We will continue to act against the terrorists, and at the same time we will continue to do everything possible to separate them from the population, because these are our values and it is also in our interest if we want to maintain stability,” he said.