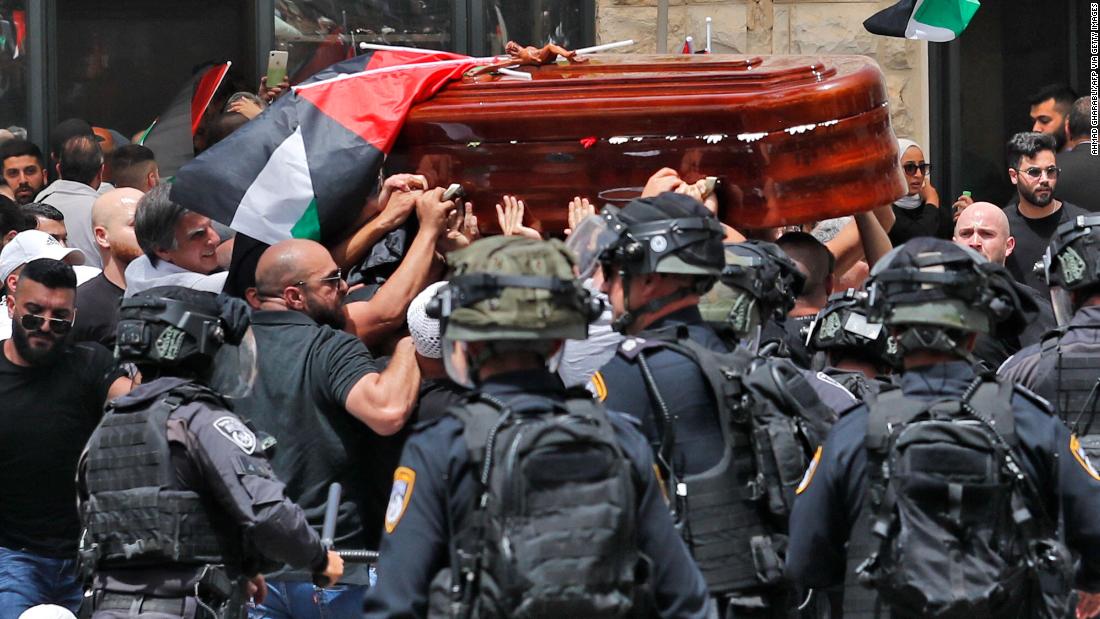 Jerusalem(CNN) There was unrest in Jerusalem Friday as thousands attended the burial of veteran Al Jazeera journalist Shireen Abu Akleh, who was shot dead two days earlier while reporting on a military raid in the West Bank city of Jenin.

Mourners had marched from Jerusalem’s Jaffa Gate to Mount Zion cemetery. They were met with violence at the St. Joseph hospital complex by Israeli police when they tried to carry Abu Akleh’s coffin, which Al Jazeera footage showed being rocked and then falling out of the hands of some of the pallbearers, as Israeli police beat them with batons.

Crowds walked behind as Abu Akleh’s rose-covered coffin was carried by pallbearers and lain down to rest next to her parents’ grave. Church bells echoed through the cemetery.

The burial was taking place a day after a memorial procession that brought thousands to the West Bank city of Ramallah.

Mourners flocked to the city’s streets on Friday and huddled in front of St. Joseph hospital in East Jerusalem, where Abu Akleh’s body remained until the burial. Muslims performed Friday prayers and mourners chanted “walking, walking on foot,” demanding that Abu Akleh’s coffin be carried and transported on foot from the hospital to the Greek Catholic church, where a service will be held, and then to the burial site. Israeli police were lined outside the hospital, according to CNN reporters. Police roadblocks were set up around the hospital.

Mourners carried Abu Akleh’s coffin out of the hospital, but were met with strong resistance from Israeli police who compelled them to transport the body by car. A flash bomb and tear gas were fired, according to CNN reporters.

Family and friends carry the coffin of Abu Akleh, as Israeli security forces stand guard during her funeral in Jerusalem on May 13.

Al Jazeera live footage showed Israeli police beating mourners with batons as they struggled to carry Abu Akleh’s coffin. The body was in turn brought back inside the hospital and then transported by car, said Al Jazeera.

Footage on social media and Al Jazeera showed Abu Akleh’s coffin being rocked back and forth and then falling as Israeli police beat pallbearers with batons. It was not immediately clear if the coffin hit the ground.

Israeli police in a statement said that “hundreds of rioters began to disrupt public order, even before the funeral began,” as they worked to secure the procession.

“Towards the exit of the casket from the hospital, rioters began throwing stones toward the policemen from the French hospital plaza, and the policemen were forced to act.”

Israeli police approach pallbearers carrying the body of Abu Akleh with batons at her funeral on Friday.

Thousands were packed inside and outside the church as Abu Akleh’s body arrived. Women were heard ululating in mourning and priests sang Christian hymns in Arabic as the coffin, draped in Palestinian flags, was carried through the crowd.

The 51-year-old Palestinian-American Al Jazeera journalist was a prominent voice across the Arab world, delivering what many said was “the voice of Palestinian suffering” and their “aspirations of freedom.”

The circumstances of her death remain unclear. The Palestinian Authority on Thursday denied Israel’s offer of a joint investigation, insisting on an independent process and vowing to try those accused of her killing to the International Criminal Court (ICC).

Palestinian Prime Minister Mohamed Shtayyeh told Al Jazeera on Thursday that the results of their investigation will be released soon and will include the autopsy report.

Israel says it is investigating the death of Abu Akleh. Asked by CNN how she was killed, IDF international spokesperson Amnon Shefler said Thursday “we just don’t know yet” who shot her.

Israeli military investigators confiscated the guns of some IDF troops as part of their inquiry, reported the Washington Post on Thursday, citing an unnamed IDF official. The weapons were taken so that they can be made available for ballistics testing, the official said.

Givara Al-Buderi, a fellow Al Jazeera correspondent and a close personal friend of Abu Akleh, said she saw the entry wound of a bullet just above the right eyebrow and was told by the doctor that a part of the bullet had remained lodged in Abu Akleh’s skull.

Al-Buderi was called by doctors to help remove Abu Akleh’s clothing and change her for the funeral.

“We took off her clothes and had to put a white dress on her,” Al-Buderi told CNN, “I tried to put my hand behind her head, but there was nothing there.”

“I felt around but there was nothing, nothing left.”

An earlier version of this story incorrectly stated where Shireen Abu Akleh’s funeral service was due to be held. It was being held at a Greek Catholic Church.