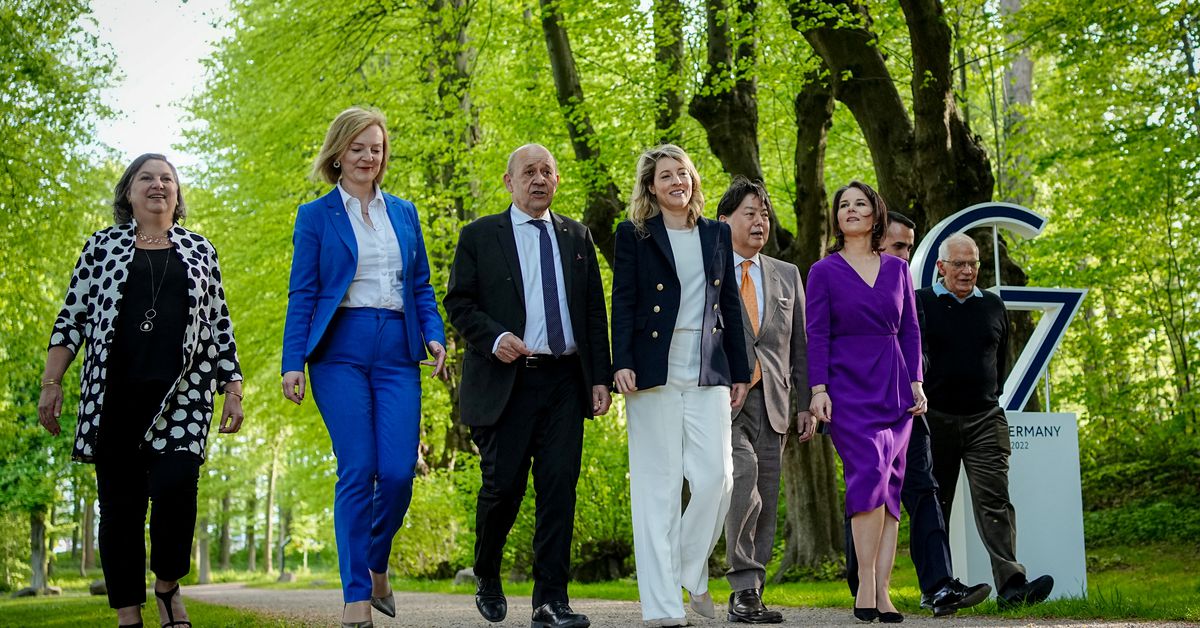 WEISSENHAUS, Germany, May 13 (Reuters) – Foreign ministers from the G7 group of rich nations backed giving more aid and weapons to Kyiv as they met on Friday in what Germany called a “powerful sign of unity” to deepen Russia’s global isolation.

The European Union’s foreign policy chief Josep Borrell announced a further 500 million euros worth of military support to Ukraine and said he was confident that an EU embargo on Russian oil could be agreed in the coming days.

The annual meeting running until Saturday brings together top diplomats from Britain, Canada, Germany, France, Italy, Japan, the United States and the EU to a 400-year-old castle estate in the Baltic Sea resort of Weissenhaus. read more

The event, which the foreign ministers of Ukraine and Moldova attended, will also spotlight food security concerns and fears that the war in Ukraine could spill over into its smaller neighbour Moldova.

It will defy Russian attempts to split the world over Ukraine, German Foreign Minister Annalena Baerbock said ahead of the meeting.

“Never since the end of the Cold War have we G7 partners been more profoundly challenged. Never before have we stood more united,” she said in a tweet.

Borrell said the new EU military support would be for heavy weapons such as tanks and artillery and take the bloc’s aid to about 2 billion euros.

“(It will be) more pressure on Russia with economic sanctions and continuing the international isolation of Russia and countering misinformation,” he said.

Speaking to reporters on the sidelines of the meeting, Ukraine’s Foreign Minister Dmytro Kuleba challenged the EU to impose the oil embargo, saying Putin would celebrate if the proposal fell through. Ukraine’s neighbour Hungary has opposed the plan, which requires unanimity to pass.

“We do not interfere in their discussion, but it’s a critical moment when we will see whether EU unity will continue to exist or whether it will be broken,” he said.

Kuleba called on allies to seize Russian assets to finance the rebuilding of Ukraine, a proposal backed by Germany’s Finance Minister Christian Lindner in an interview published by Germany weekly Der Spiegel on Friday.

Germany this weekend separately will host ministers from NATO, as Sweden and Finland gear up to apply for membership of the transatlantic alliance, drawing threats of retaliation from Moscow. read more

The war in Ukraine has sent global prices for grains, cooking oils, fuel and fertilizer soaring, with United Nations agencies warning that the price hikes will worsen a food crisis in Africa in particular.

Russia’s invasion has disrupted shipping in the Black Sea, a major route for grains and other commodities, throttling exports.

“There are 25 million tonnes of grain currently blocked in the Ukrainian port of Odesa, which means food for millions of people in the world that is urgently needed, above all in African countries and in the Middle East,” Baerbock told reporters.

“That’s why we’re sending a clear signal today: we see you, we hear you and we support you,” she said.

Diplomatic sources said the aim was for the seven countries to organise themselves better to find quick and efficient answers to the food crisis.

While U.S. Secretary of State Antony Blinken will not make the meeting due to catching COVID-19, the remaining ministers will aim to reassure Moldova.

It is struggling to cope with the refugee flow from neighbouring Ukraine, and incidents involving pro-Russian separatists in the Transdniestria breakaway region have raised international alarm that the war could spread over the frontier.

“The country has been weakened because of the war … so we need to confirm our support for Moldova,” a French diplomatic source told reporters.