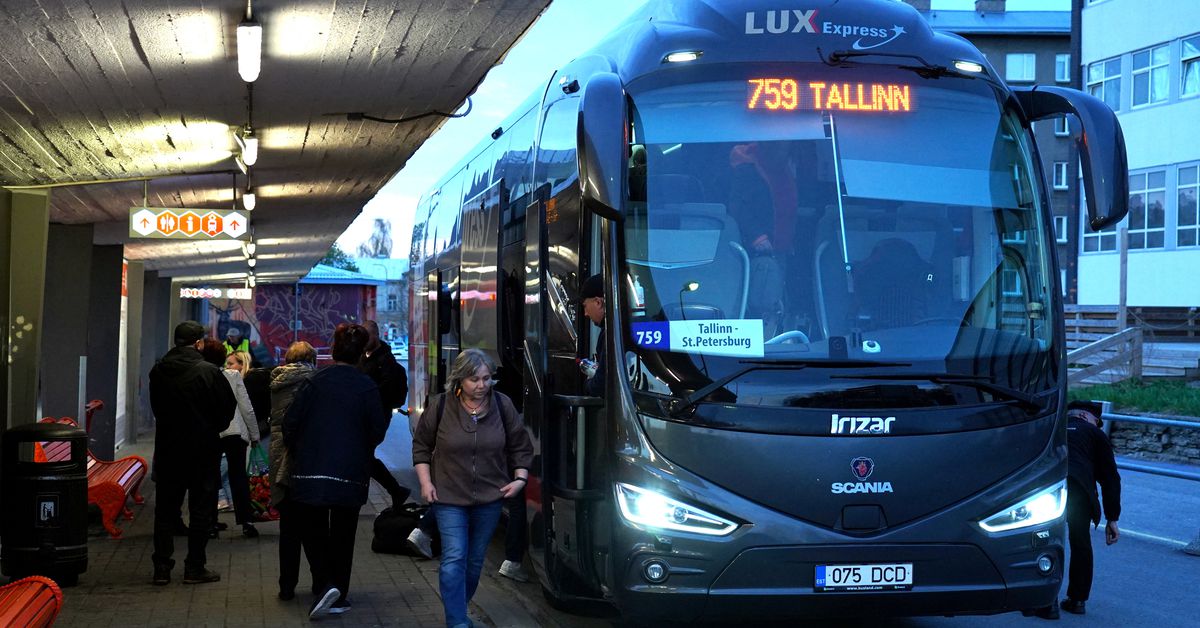 TALLINN, May 12 (Reuters) – When Pavel fled his home region of Kherson in southern Ukraine he set his sights on reaching Portugal, where his sister-in-law lives – but like increasing numbers of his compatriots escaping the war, he took the long way round.

Too frightened to head west out of the Russian-controlled region and across the conflict’s front line, he and his wife and baby daughter skirted it by travelling east into Crimea and then north through Russia, eventually entering the EU via Estonia – a detour of more than 3,000 km (1,860 miles).

After a journey of 90 hours in trains and buses, they reached Tallinn bus station in the early hours of Thursday, three of the hundreds of Ukrainians who arrive there every night on one of 12 daily bus services from Saint Petersburg.

“How can you even think of going through the war zone, where both sides shoot at each other?,” the 38-year-old – looking exhausted and speaking slowly – told Reuters, declining to give his family name.

“(But) it was scary to even imagine going to through Russia, where you don’t know if people would be friendly to you.

“We took care to always take the next train or bus and never stop anywhere. Because you never know where you’d get stuck.”

Pavel asked volunteers at the station to book the family a ticket on the next bus to Warsaw, with a view to heading towards Lisbon from there. As his daughter slept in a stroller, hugging a knitted rabbit, he added: “I did not know travelling is so hard on young children.”

Authorities in the Baltic state estimate that more than 19,000 Ukrainians have crossed into Estonia from Russia since the war began in late February.

The daily departures from Saint Petersburg have doubled in capacity during that time and, along with two daily 23-hour buses from Moscow to Riga, are among the few remaining scheduled services between Russia and the European Union.

Most arrive at night, due to long delays in processing Ukrainian refugees’ documents on the Russian side of the border, which for Pavel took over two hours and included a search of his phone.

To welcome them, Tallinn bus station has equipped a room with nine beds and also provides hot soup for those who need to spend the night there.

The beds are often all occupied, so dozens more settle where they can on benches and the station floor to wait for dawn, said bus station chief Airika Aruksaar.

She said the first arrivals from Eastern Ukraine reached Tallinn in late March, and their numbers have been steadily going up since, while refugees fleeing via Poland are down.

Nine out of ten Ukrainians who reach Estonia are seeking onward travel, she said.

Many arriving late on Wednesday and early on Thursday told Reuters they were looking to move on quickly after mostly uneventful journeys through Russia.

But for some, the sense of loss at having left a ravaged homeland remained overwhelming.

“I just want to go back. To die in Ukraine,” said Olga Fyodorova, 69, preparing for a night in the bus station dormitory having travelled from Russian-controlled Luhansk with her son Herman, 43.

“I just want this all to end”.