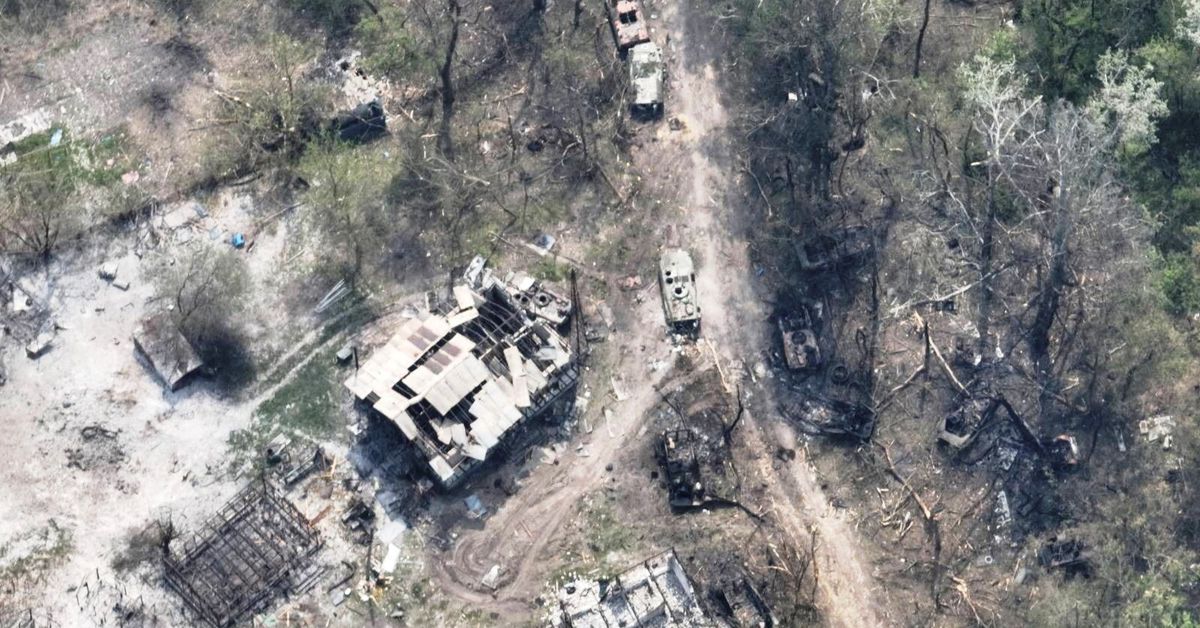 DERGACHI, Ukraine, May 13 (Reuters) – Ukrainian forces destroyed parts of a Russian armoured column as it tried to cross a river in the Donbas region, video from Ukraine’s military showed on Friday, as Moscow appeared to be refocusing its assault in the east after a new pushback by Kyiv.

Ukraine has driven Russian troops away from the second-largest city of Kharkiv in the fastest advance since Kremlin forces pulled away from Kyiv and the northeast over a month ago, although Moscow is still bombarding villages north of Kharkiv.

The city, which had been under fierce bombardment, has been quiet for at least two weeks and Reuters journalists have confirmed Ukraine now controls territory stretching to the Siverskyi Donets River, around 40 km (25 miles) to the east.

Some 10 km (six miles) north of the city, firefighters doused smouldering wreckage in Dergachi after what local officials said was an overnight Russian missile attack on the House of Culture, used to distribute aid. Volunteers inside were trying to salvage packages of baby diapers and formula.

“I can’t call it anything but a terrorist act,” the mayor, Vyacheslav Zadorenko, told Reuters. “They wanted to hit the base where we store provisions and create a humanitarian catastrophe.”

Another missile had slammed into the building on Thursday and Russian shelling had wounded a staff member at a clinic and killed a young couple in their home, he said.

Russia, which denies targeting civilians, said its forces had shot down a Ukrainian Su-27 aircraft in the Kharkiv region and disabled the Kremenchuk oil refinery in central Ukraine.

It was not immediately possible to verify the reports.

Southeast of Kharkiv, Britain said Ukraine had stopped Russian forces crossing the Siverskyi Donets river west of Severodonetsk. Footage released by Ukrainian Airborne Forces Command appeared to show several burnt out military vehicles near segments of a partially submerged bridge and many other damaged or abandoned vehicles, including tanks, nearby.

Reuters could not immediately verify the report, or when or where the clash took place.

The British defence ministry said Russia was investing significant military effort near Severodonetsk and Izium, and trying to break through towards Sloviansk and Kramatorsk to complete their takeover of Ukraine’s industrial Donbas region.

Russian-backed separatists said they had taken the Zarya chemical plant in Rubizne near Severodonetsk.

The Kremlin calls its Feb. 24 invasion of Ukraine a “special military operation” to demilitarise a neighbour threatening its security. Ukraine says it poses no threat to Russia and that the deaths of thousands of civilians and destruction of cities and towns show that Russia is waging a war of aggression.

Ukraine accused Russia of forcibly deporting more than 210,000 children since its invasion on Feb. 24, saying they were among 1.2 million Ukrainians transferred against their will.

The Kremlin says people have come to Russia to escape fighting.

In Kyiv, a court began hearing the first case of what Ukraine says are more than 10,000 possible war crimes; a Russian soldier is accused of murdering a civilian soon after the invasion. Moscow has accused Kyiv of staging such crimes. read more

An aerial view of destroyed buildings and burnt vehicles on the banks of Siverskyi Donets River, eastern Ukraine, in this handout image uploaded on May 12, 2022. Ukrainian Airborne Forces Command/Handout via REUTERS

In the southern port of Mariupol, Russian forces intensified their bombardment of the Azovstal steelworks, the last bastion of Ukrainian defenders in a city almost completely controlled by Russia after a siege of more than two months.

Reuters video showed explosions and thick smoke on Thursday and Ukrainian fighters released footage showing gunbattles. Some of the civilians evacuated recently from tunnels under the plant where they had taken shelter described terrifying conditions.

Renewed fighting around Snake Island in recent days could help Ukraine resume grain exports vital to world supplies, some of which are now being shipped by rail.

“There are 25 million tonnes of grain currently blocked in the Ukrainian port of Odesa, which means food for millions of people in the world that is urgently needed,” German Foreign Minister Annalena Baerbock said.

Ukraine said it had damaged a Russian navy logistics ship near Snake Island, a small but strategic outpost that Ukrainian military intelligence said allows control of civilian shipping. Russia’s defence ministry did not immediately respond to a request for comment.

Satellite imagery from Maxar, a private U.S.-based company, showed the aftermath of what it said were probable missile attacks on a Russian landing craft near the island, which became famous for the foul-mouthed defiance of its Ukrainian defenders early in the invasion.

In Germany, Foreign ministers from the G7 group of rich nations met to discuss a planned EU embargo on Russian oil as well as fears the conflict could spill over into Moldova. read more

Ukrainian Foreign Minister Dmytro Kuleba told the meeting he hoped EU holdout Hungary would agree to the oil embargo and asked the G7 to hand over Russian assets to help Ukraine rebuild.

“We are talking about hundreds of billions of dollars. Russia must pay,” he told reporters. read more

A day after Russia’s northeastern neighbour Finland committed to applying to join NATO, Swedish Foreign Minister Ann Linde said membership for her country would have a stabilising effect and benefit countries around the Baltic sea. read more

Joining the 30-nation Western military alliance would end the neutrality the two states maintained throughout the Cold War and further the expansion of NATO that Putin said his invasion of Ukraine aimed to prevent. NATO member Turkey said it did not support the idea, throwing doubt over the process.