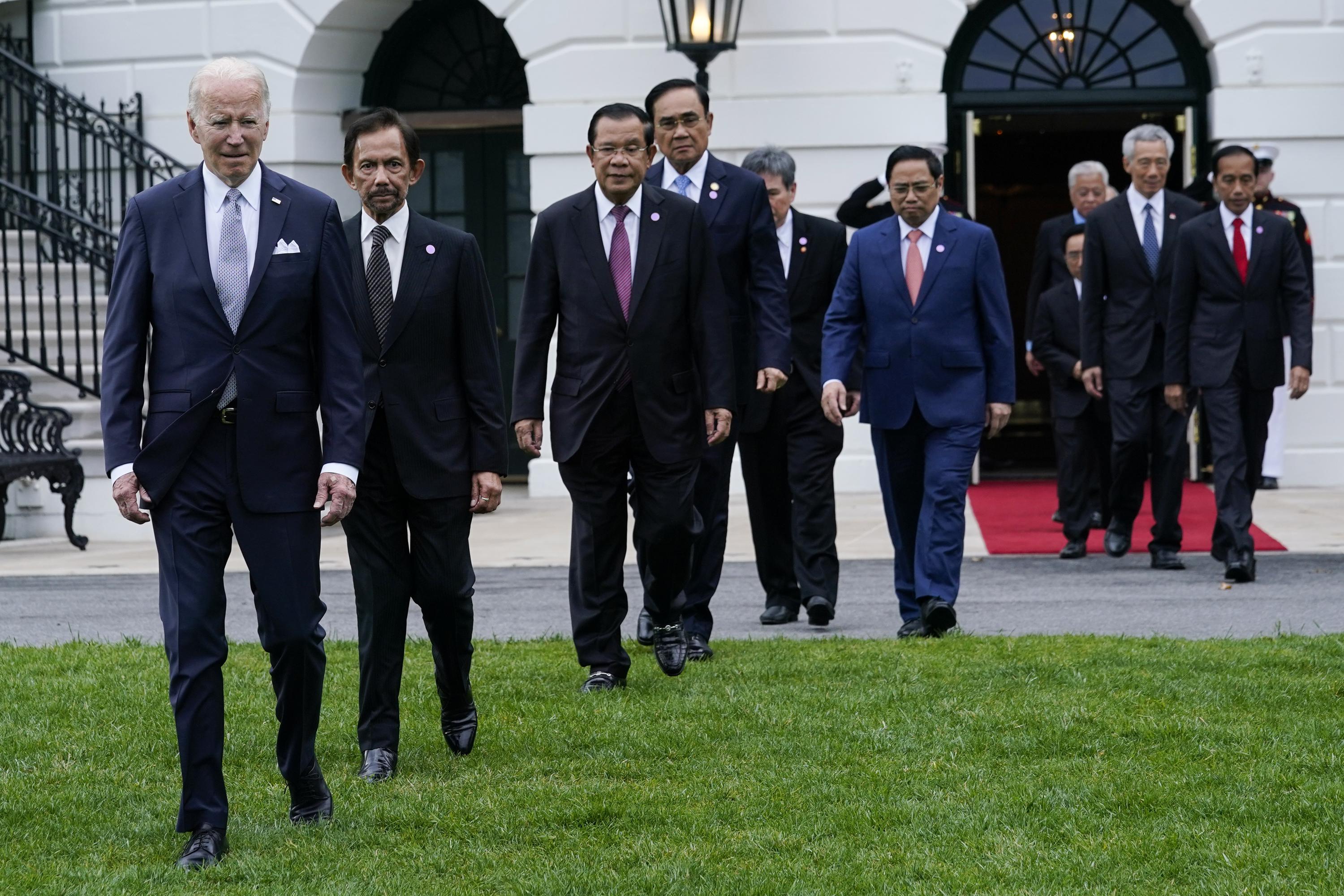 WASHINGTON (AP) — President Joe Biden is looking to nudge Southeast Asian leaders to be more outspoken about Russia’s invasion of Ukraine, but the war is a delicate issue for many members of the region’s 10-country alliance that has deep ties to Moscow.

Biden welcomed leaders from the Association of Southeast Asian Nations to the White House on Thursday night for a dinner to kick off a two-day summit, the first meeting of the group to be held in Washington in its 45-year history.

The White House is also trying to demonstrate that it is stepping up involvement in the Pacific even as the administration has been focused on the war in Ukraine. It announced that the United States would commit to more than $150 million in new projects to bolster Southeast Asia’s climate, maritime and public health infrastructure.

Biden knows that finding consensus with ASEAN members on the Russian invasion could prove to be difficult.

White House press secretary Jen Psaki on Thursday said Ukraine would be on the agenda for the leaders’ talks, but she wouldn’t predict whether the group would touch on the Russian invasion in the summit’s concluding communique.

“I will say that a number of the ASEAN participants have been important partners in calling out the aggressive action of Russia,” she said, and “in participating and in supporting sanctions and, certainly, abiding by them.”

Some ASEAN members — Vietnam, Myanmar, and Laos — for years have depended on Russia for military hardware. With the exception of Singapore — the only member of the 10-member group to impose direct sanctions against Moscow — the alliance has avoided criticizing President Vladimir Putin or Russia’s prosecution of the war.

Indonesia has been guarded in its public comments on the invasion, and the Philippines has made clear it won’t impose sanctions against Russia. Thailand joined a United Nations vote against the invasion of Ukraine but has maintained a position of neutrality in the war.

“Our hope is to see the war in Ukraine stop as soon as possible, and we give the peaceful resolution of a conflict a chance to succeed,” Indonesian Foreign Minister Retno Marsudi told reporters on Friday at the start of meeting with U.S. Secretary of State Antony Blinken. “Because we know that if the war continues, all of us will suffer.”

Leaders met with Vice President Kamala Harris at the State Department on Friday for talks, and Biden was to address them later in the afternoon.

Harris told the group the Biden administration “recognizes the vital strategic importance” of the bloc, and she assured the leaders, “The United States will be present and continue to be engaged in Southeast Asia for generations to come.”

The summit comes just before Biden’s trip next week to South Korea and Japan — his first visit to Asia as president. He’ll hold talks with those two countries’ leaders and also meet during the trip with leaders from the Indo-Pacific strategic alliance known as the Quad, made up of Australia, India and Japan in addition to the U.S.

Biden has tried to put greater focus on improving relations with Pacific nations in his presidency, viewing a rising China as the most threatening economic and national security adversary to the United States.

But his attempt at recalibrating U.S. foreign policy has been complicated by the most serious fighting in Europe since World War II.

The new U.S. investment in ASEAN nations announced at the start of the summit on Thursday includes $40 million for clean energy infrastructure, $60 million for a new regional maritime initiative and $6 million to accelerate digital development in the region.

The White House also announced that Johns Hopkins University’s School of Advanced International Studies will launch a privately funded institute for rising leaders from ASEAN nations that will bring mid-career public sector officials to the United States for leadership training.

Kurt Campbell, coordinator for Indo-Pacific Affairs on the White House National Security Council, said the administration expects the private talks will be “direct, polite but maybe a little bit uncomfortable at times” as the U.S. and ASEAN members are not on the same page on all issues.

He added the administration wants to see the group “play a more deeply engaged role in the critical diplomacy about next steps” in Myanmar.

ASEAN has barred Myanmar — in crisis since the army ousted the elected government of Aung San Suu Kyi in February 2021 — from sending all but nongovernmental leaders to ASEAN meetings.