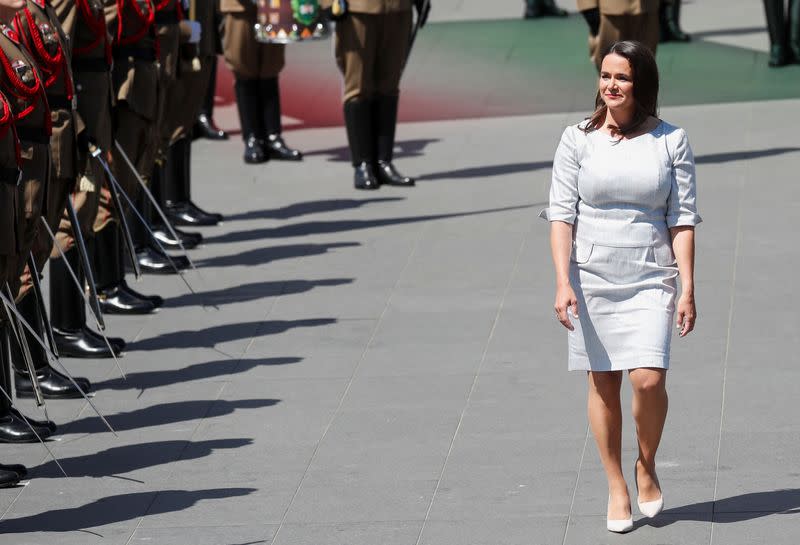 BUDAPEST (Reuters) – Hungary’s President Katalin Novak at her inauguration ceremony on Saturday condemned Russia’s invasion of Ukraine and said her first trip would take her to Poland, in an apparent gesture to mend relations with Warsaw.

Hungary’s rejection of sending weapons shipments to neighbouring Ukraine and its opposition to a planned European Union embargo on Russian oil imports has weighed on relations between Budapest and Warsaw, whose two nationalist governments have been long-time allies in the EU.

Novak, a former Fidesz party lawmaker and ally of Prime Minister Viktor Orban, was elected to the largely ceremonial post of president in March, shortly before Orban won another landslide victory in elections on April 3.

“On Tuesday, 17 May, I am travelling to Warsaw to meet the President of the Polish people. Mr. President, dear Andrzej (Duda), I thank you for the opportunity to talk as befits friends!,” Novak said in her inauguration speech.

“We condemn Putin’s aggression, the armed invasion of a sovereign state. We say eternally no to every effort aiming at the restoration of the Soviet Union,” she added.

She said the war in Ukraine was also “fought against us peace -loving Hungarians”, adding that Hungary demanded that war crimes be investigated and punished.

Orban has also condemned Russia’s attack on Ukraine but has avoided personal criticism of President Vladimir Putin and has been strongly opposed to any sanctions on Russian energy.

Dependence on Russian oil in Bulgaria, the Czech Republic, Hungary and Slovakia poses the biggest obstacle to an embargo deal that the European Commission, the EU executive, proposed in early May in response to Russia’s Feb. 24 invasion of Ukraine.

(Reporting by Krisztina Than; Editing by Christina Fincher)