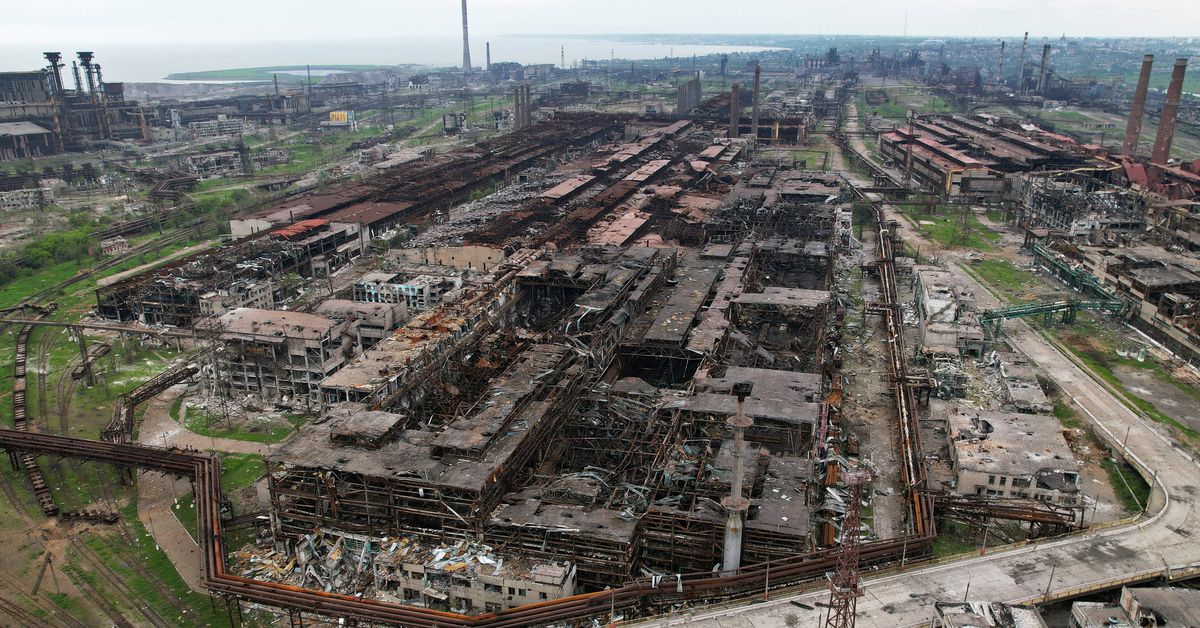 KYIV/MARIUPOL, May 23 (Reuters) – Ukraine said on Monday it had held off the latest assault on an eastern city that has become the main target of Moscow’s offensive since Russian forces finally seized Mariupol last week.

The city, on the banks of the Siverskiy Donets river that winds through eastern Ukraine, has been the main Russian target in recent days as Moscow tries to encircle Ukrainian forces in the east and fully capture the Luhansk and Donetsk provinces.

In Mariupol, where hundreds of Ukrainian fighters finally laid down their arms last week after a nearly three-month siege, Russian mine clearing teams were combing through the ruins of the giant Azovstal steel plant.

A huge armoured bulldozer painted with a white letter “Z”, which has become the symbol of Russia’s assault, pushed debris to the side as a small group of soldiers picked their way through the wreckage with metal detectors.

“The task is huge. The enemy planted their own landmines, we had also planted anti-personnel mines while blocking the enemy. So we’ve got some two weeks of work ahead of us,” said a Russian soldier, going by the nomme de guerre Babai.

“At this time, over the last two days, over one hundred explosives have been destroyed. The work continues.”

An aide to Mariupol’s Ukrainian mayor, operating outside the now entirely Russian-held city, said remaining residents were now in danger of disease as sewers overflow amid the ruins. Ukraine believes tens of thousands of people died in the siege of the city of more than 400,000 people.

“Mariupol needs another evacuation of residents due to the growing threat of an epidemic,” Petro Andryushchenko wrote on Telegram. “The consequences of turning Mariupol into a ghetto will be catastrophic. The threat of an epidemic turns into reality with every thunderstorm.”

Air raid sirens blared across Ukraine on Monday morning, sounding the daily alarm ahead of anticipated attacks by Russian forces in the east and south of the country, three months after Russia’s Feb. 24 invasion to “denazify” the country.

‘WIPING OFF THE FACE OF THE EARTH’

Russia has focused its “special military operation” on the east since its troops were driven out of the area around the capital Kyiv and the north of the country at the end of March.

Since last month, Moscow has said its main effort is capturing all of Donetsk and Luhansk provinces, together known as the Donbas, which Russia claims on behalf of separatists.

Despite pouring its forces into those areas and launching massive artillery bombardments, it has made only small territorial gains there, meanwhile continuing to lose territory in a Ukrainian counter-attack further north around Kharkiv.

But the full capture of Mariupol last week gives Russia its biggest victory for months. Its forces now control a largely unbroken swathe of the east and south, freeing up more troops to join the main Donbas fight.

In recent days it has launched a series of assaults to capture Sievierodonetsk, a city that forms the easternmost part of a Ukrainian-held pocket of the Donbas, and one of the last parts of Luhansk province still outside its grip.

Luhansk governor Serhiy Gaidai said Russia was using scorched earth tactics and “wiping Sievierodonetsk from the face of the earth”. Moscow was trying to advance in the province from three directions, to overrun Sievierodonetsk, cut off a highway south of it and cross the river further west at Bilohorivka.

Despite the latest assault, some Western military experts say Russia may soon be running out of combat power to wage offensive operations in eastern Ukraine and could have to shift in coming weeks to defending territory it has captured so far. Western weapons have been pouring into Ukraine, giving Kyiv more strength for a future counterattack.

“As their eastern offensive loses momentum, the Russians will inevitably have to transition to a defensive strategy in Ukraine. And in doing do, the Russian Army will confront a new range of difficult challenges ahead,” wrote Mick Ryan, a retired Australian major general and defence analyst.

“The Ukrainian Army will be able to decide where and when it engages the Russians.”

Britain’s ministry of defence said Russia had probably endured losses in three months in Ukraine on par with its losses in nine years in Afghanistan in the 1980s.

“A combination of poor low-level tactics, limited air cover, a lack of flexibility, and a command approach which is prepared to reinforce failure and repeat mistakes has led to this high casualty rate, which continues to rise in the Donbas offensive,” it said.

Reporting by Pavel Polityuk in Kyiv and Reuters journalists in Mariupol Writing by Peter Graff; Editing by Nick Macfie