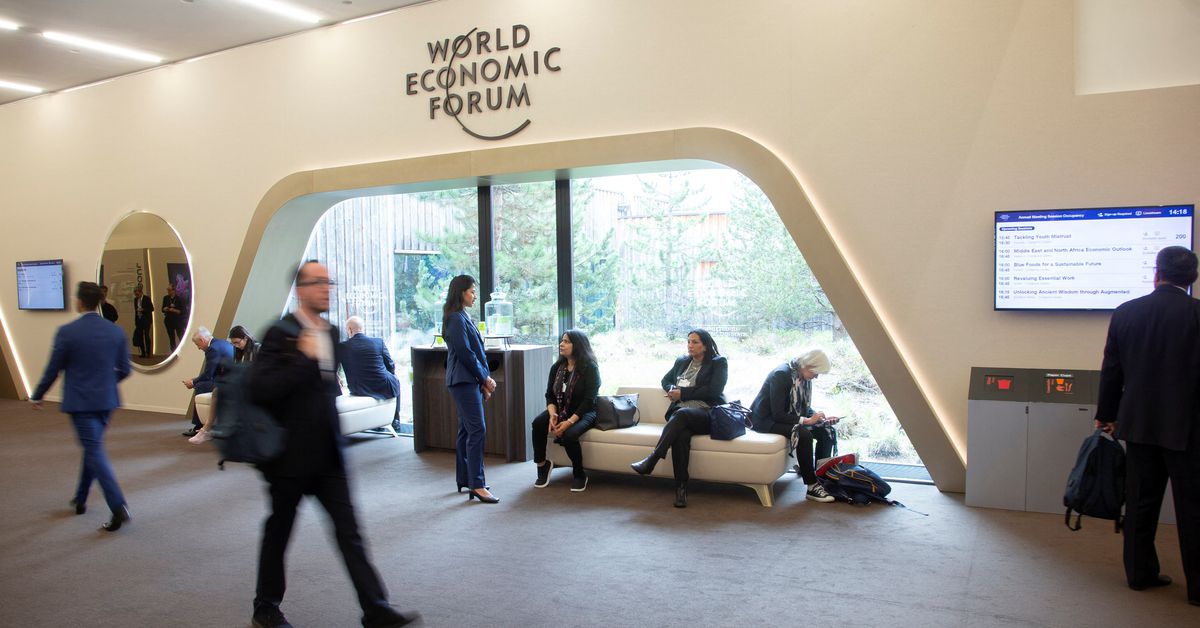 Participants are seen at the congress hall, the venue of the World Economic Forum 2022 (WEF) in the Alpine resort of Davos, Switzerland May 23, 2022. REUTERS/Arnd Wiegmann

DAVOS, Switzerland, May 27 (Reuters Breakingviews) – Three things were in shorter supply than usual at this week’s World Economic Forum in Davos: snow, delegates, and reasons to be cheerful. The confab of politicians, financiers, business leaders and hangers-on reconvened in the Swiss mountain resort after a pandemic-induced absence of more than two years. The consensus that emerged is that the world is beset by problems, many of which are going to get worse. The best hope is that the unreliable prognosticator known as “Davos Man” has got it wrong once again.

It wasn’t just the lack of icy pavements and glitzy parties or the free seats in the normally crowded conference centre that distinguished this year’s gathering from the usual late-January schmooze-fest. Attendees also noted a pervasive economic and political gloom. Russia’s invasion of Ukraine, now in its fourth month, has tipped the world into a myriad of crises.

Top of mind are soaring energy costs. Europe is trying to wean itself off Russian oil and gas, urged on by Ukrainian politicians who fanned out across Davos to press the case for a full embargo. But alternative sources are scarce. Western banks are sticking to their commitments to reduce carbon emissions to net zero, making it “very hard to finance any new” fossil fuel projects, one senior European banker noted. Officials from Saudi Aramco (2222.SE), the world’s largest oil company, warned of a shortage of supply of the commodity.

The steep rise in oil prices is adding to a severe shortage of food. The global farming community cannot replace the wheat that normally comes from the fields of both Russia and Ukraine. Heavy importers like Egypt and Tunisia may struggle to put food on the table. David Beasley, executive director of the United Nations World Food Programme, said hundreds of millions of people were “marching to starvation”. Political instability is likely to follow.

Then there are the lingering effects of Covid-19. Though only a handful of Davos delegates sported face masks, many fretted about the new round of harsh lockdowns in China, which have depressed growth in the world’s second-largest economy and further disrupted supply chains. Multinationals are seeking backup suppliers in places like southeast Asia, or bringing production closer to home. Meanwhile, governments are reviewing their dependence on imports of energy, semiconductors, and pharmaceuticals. As companies duplicate manufacturing facilities and hold higher inventories, margins will be squeezed.

China is also causing consternation for other reasons. As the conference kicked off, U.S. President Joe Biden – who chose to visit Asia rather than Switzerland – said he was willing to use force to defend Taiwan. That raised the prospect of the West deploying sweeping sanctions against the People’s Republic. It’s one of the few areas of agreement among U.S. political leaders now bickering about gun control after yet another shooting in an American elementary school. But one senior European banker warned that imposing Russian-style sanctions on China would be so disastrous for both sides that it amounted to an economic form of the “mutually assured destruction” of the Cold War.

Investment bankers can typically find a reason to see the glass as half full. Not this year. The S&P 500 Index is flirting with a bear-market decline of 20%, while many large technology stocks have halved in value. This has brought the market for equity offerings to a screeching halt. Bankers underwriting debt issues and advising on mergers and acquisitions are also likely to be less busy after a record-breaking 2021. Valuations of venture capital-backed startups, tens of thousands of which raised money last year, are under pressure. “Half of them are not going to make it,” said one investor.

Yet even as Gita Gopinath, the International Monetary Fund’s No. 2, told a Davos audience of “downside risks” to the fund’s 3.6% forecast for global GDP growth this year, other companies suggested their businesses were still holding up. Take $5 billion global staffing company ManpowerGroup (MAN.N), which helps to manage temporary workers who are often a leading indicator for the broader workforce. “We’re not yet seeing any sign of labour markets having any difficulty in this environment,” Chief Executive Jonas Prising said.

It’s also worth remembering that prevailing opinions formed at Davos have an unerring knack of being wide of the mark. In 2017, delegates hailed Chinese President Xi Jinping as a champion of globalisation. A year later, Western bankers and businessmen praised Saudi Arabian Crown Prince Mohammed bin Salman’s economic and social reforms. Months later, Saudi agents murdered the journalist Jamal Khashoggi in Istanbul. And in January 2020 the Davos crowd was preoccupied with the risks posed by climate change, not the pandemic which closed down large parts of the world economy a few weeks later.

A similar forecasting error this year could even be good news for the planet. Ukraine and Russia might agree to a truce, leading to the partial lifting of sanctions and easing of the pressure on energy and food prices. China may find a way to live with Covid-19. Inflation could recede, allowing central banks to push through fewer increases in interest rates. Economic growth could pick up, and financial markets recover. As they headed home, global leaders received the news that the World Economic Forum will reconvene in January 2023. It will be less than eight months before “Davos Man” finds out whether he got it wrong again.

– The World Economic Forum’s annual meeting in Davos, Switzerland concluded on May 26.

Opinions expressed are those of the author. They do not reflect the views of Reuters News, which, under the Trust Principles, is committed to integrity, independence, and freedom from bias.