Israeli soldiers have been removing Palestinian flags hanging in a West Bank town in recent weeks, in a move the Israeli officials said they hoped will help prevent clashes between locals and Israeli settlers.

However, officials said, they have now stopped the practice.

Over the past weeks, Israeli troops have been documented both removing Palestinian flags from lampposts in the town of Huwara, and protecting settlers as they remove the flags too.

Footage has shown Israeli soldiers distancing Palestinians from the area using stun grenades and pointing their weapons at angry Palestinian onlookers on a main highway that is used by both Palestinians and Israelis.

Recent weeks have also seen several stone-throwing attacks by Palestinians against Israeli cars traveling through the town on Route 60, a major West Bank artery that links both Palestinian cities and Israeli settlements.

In one stone-throwing incident, on Tuesday night, the son and two grandchildren of a right-wing lawmaker were wounded.

The flag grab began two weeks ago, after an Israeli woman claimed her car had been attacked and surrounded by Palestinians while traversing the town. She was unhurt. Several days later, Israeli settlers returned to Huwara to remove flags, as an act of revenge.

The military believes arriving at the scene first to remove the Palestinian flags will prevent settlers from doing so themselves, and thus prevent potential clashes with local Palestinian residents, according to an assessment officials described to The Times of Israel.

However, footage showed troops protecting a handful of Israeli settlers as they took down one of the flags last week, while launching teargas at onlookers. The Israel Defense Forces told The Times of Israel in a statement that its forces arrived at the scene after a violent confrontation had developed between the settlers and Palestinians in the area.

The soldiers worked to keep the two sides apart, but a number of Palestinians began throwing stones at the forces, who responded with riot dispersal measures, the military said.

Days later, Israeli troops were seen again protecting a group of settlers parading through the Palestinian town with Israeli flags, the morning after the attack in which the family of an MK was hurt. The show of force did not appear to be coordinated with the military, as sources said troops arrived after the fact.

But again, troops responded with tear gas toward the onlookers, without immediately dispersing the settlers.

Israeli law does not bar Palestinian flags, but police regularly remove them from public spaces and seize them from Palestinians waving them in Israeli-annexed East Jerusalem.

Both police and the military claim to have the authority to remove anything that may spark clashes — including flags. 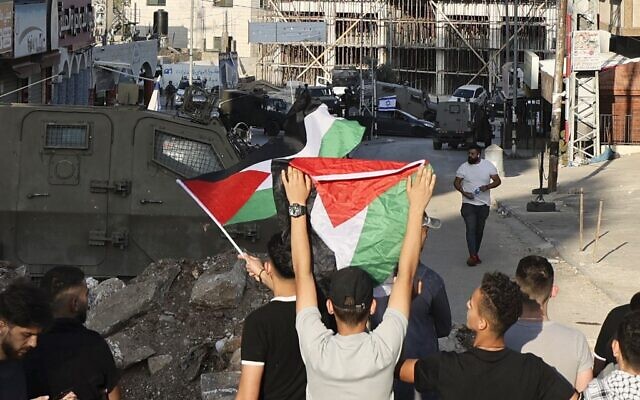 The IDF has indicated it plans to stop collecting the flags, unless some need to do so arises.

The commander of the military’s Samaria Brigade ordered troops earlier this week to leave the flags be, for the time being.

In a related incident, an off-duty soldier was arrested on Tuesday night after attempting to remove a Palestinian flag in the area, the Kan public broadcaster reported.

He was found to be carrying several weapons and ammunition, and the IDF only said he was detained “on suspicion of serious weapons offenses.”

Generally, such scenes are rare in the West Bank though, particularly in Palestinian towns that are under the Palestinian Authority’s administrative control. 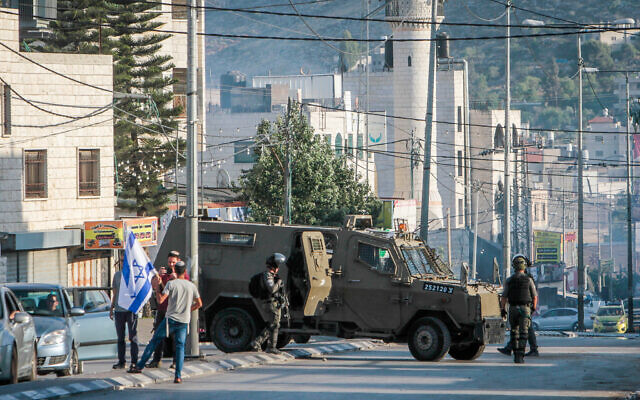 Israeli soldiers guard as settlers protest with Israeli flags in the West Bank village of Hawara, near Nablus, May 25, 2022. (Nasser Ishtayeh/Flash90)

Israeli negotiators of the Oslo Accords deemed security under the Area B-designation sufficient to protect settlers traveling through the town, though nearby settlements have grown significantly in the three decades since.

As a result, the government is currently paving a bypass road for settlers that goes around Huwara and is located in Area C.

Earlier this year, Jewish extremists hurled stones at Palestinians while parading through the town nearby, injuring three people and smashing several cars.

Over the past two weeks, Israeli forces have been documented acting against those waving Palestinian flags. This was most notably seen during the funeral of slain Al Jazeera journalist Shireen Abu Akleh, when troops attempted to snatch flags off of her casket and from funeral participants in the course of violent intervention that included rushing oat and hitting some of the pallbearers.

Sorgente articolo:
Why are soldiers snatching flags in a Palestinian town? So settlers won’t, they say – The Times of Israel