Prime Minister Naftali Bennett on Wednesday announced that he will vote against a bill barring a lawmaker charged with a serious crime from becoming prime minister.

After Bennett and Foreign Minister Yair Lapid announced Monday that they decided to dissolve the coalition amid its struggles to properly function, several parties that back the government decided to move forward with the controversial legislation. The bill is widely seen as targeting opposition leader Benjamin Netanyahu, who is being tried on criminal charges of bribery, fraud and breach of trust.

A public servant convicted of fraud and breach of trust faces a minimum prison sentence of three years, while one convicted of bribery faces 10 years in prison or a fine.

“The right to vote and be elected is sacred and constitutes the very essence of democracy,” Bennett wrote in a tweet about the proposed legislation. “While we’ve seen that there is a heavy price for a criminal defendant serving [as prime minister], those who should have the final word are Israel’s citizens.”

“Certainly on the eve of an election — there is no place for changing the rules of the game. Rather, people should be allowed to decide at the ballot box. I am convinced they will make the right choice,” the prime minister added.

Bennett had blocked the legislation from moving forward throughout his year in office, disappointing several coalition parties who campaigned on passing the law. But with coalition discipline no longer a consideration for factions readying for new elections, Finance Minister Avigdor Liberman’s Yisrael Beytenu party announced Wednesday that it would seek a Knesset vote on the bill as soon as possible.

If passed, the bill would block any Knesset member indicted for a crime that includes a minimum sentence of three years and a moral turpitude clause from being tasked by the president with assembling a government, such as Netanyahu.

Though Bennett’s relationship with Netanyahu has deteriorated further over the past year, with the opposition chief regularly questioning the prime minister’s legitimacy to hold the post, the premier’s position on the bill has not appeared to change. 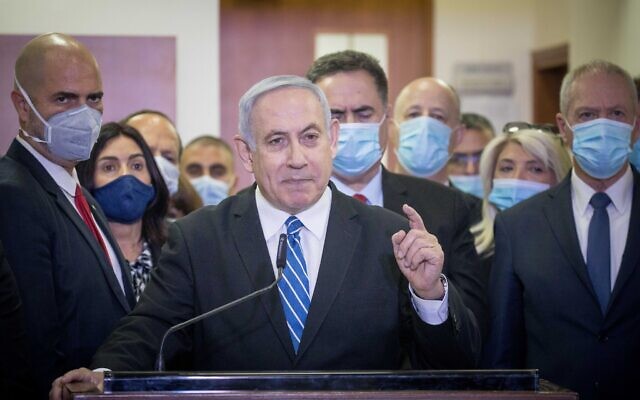 Prime Minister Benjamin Netanyahu delivers a statement before entering a courtroom at the Jerusalem District Court on May 24, 2020, for the start of his corruption trial. Alongside him from left are Likud MKs and ministers including Amir Ohana, Miri Regev, Nir Barkat, Israel Katz, Tzachi Hanegbi and Yoav Gallant. (Yonathan Sindel/Flash90)

While at least part of Bennett’s Yamina party is expected to vote against the bill, six other coalition parties are slated to back it in addition to the majority-Arab Joint List party in the opposition. The bill would need the support of the coalition’s Ra’am party in order to pass, though the faction’s members have not made clear how they would vote.

Supporters of the bill are also working against the clock as the coalition moved Wednesday to separately advance legislation to dissolve the Knesset through a preliminary reading. That legislation could be passed into law as early as Monday, and from then on, the parliament will not be able to adjudicate further bills.

Also Wednesday, Justice Minister Gideon Sa’ar announced that would bring a bill to limit the amount of time one can serve as prime minister to eight years for a vote on Sunday. The bill was advanced earlier this year but expired after the coalition failed to muster a majority to clear it through final readings. Sa’ar is now making a final attempt to pass the law in the current Knesset, though its chances of passing appear particularly low given the limited time remaining.

Even though the bill’s restrictions would not apply retroactively, the bill has generated controversy because it was seen as targeting Netanyahu, Israel’s longest-serving prime minister. Once an ally in Likud, Sa’ar ran a failed campaign against Netanyahu for the right-wing party’s leadership and the two now have a contentious relationship, as most leaders of the collapsing coalition do with the former premier.

Sorgente articolo:
Bennett says he’ll vote against bill that would block Netanyahu from serving as PM – The Times of Israel