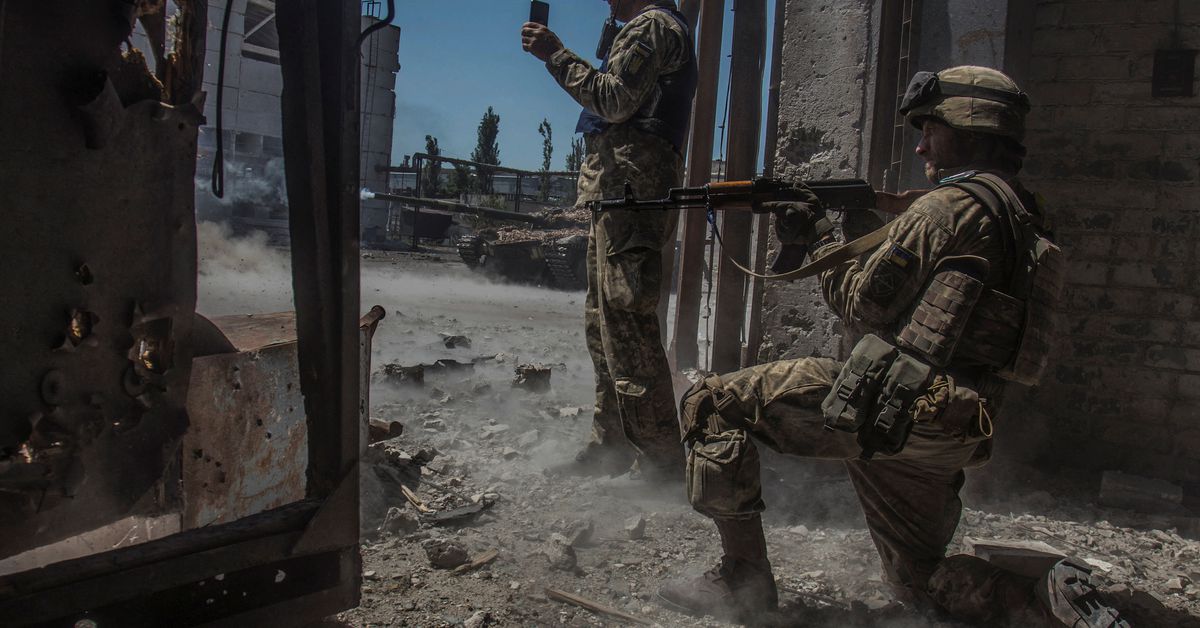 KYIV, June 23 (Reuters) – Ukraine will be accepted as a candidate to join the European Union on Thursday, a move that will boost the country’s morale as the battle with Russian troops for two cities in the east reached what one official called a “fierce climax”.

Although the approval of the Kyiv government’s application by EU leaders meeting in Brussels is just the start of what will be a years-long process, it signifies a huge geopolitical shift and will irritate Russia as it struggles to impose its will on Ukraine.

Friday will mark four months since Russian President Vladimir Putin sent troops across the border in what he calls a “special military operation” partly necessitated by Western encroachment into what Russia views as its sphere of influence.

The conflict, which the West sees as an unjustified war of aggression by Russia, has killed thousands, displaced millions and destroyed cities as well as having ramifications across much of the globe as food and energy exports have been curtailed.

Ukrainian President Volodymyr Zelenskiy urged his country’s allies to speed up shipments of heavy weapons to match Russia on the battlefield.

“We must free our land and achieve victory, but more quickly, a lot more quickly,” Zelenskiy said in a video address on Thursday.

Moscow’s massive air and artillery attacks are aimed at destroying the entire Donbas region, he said.

Russia focused its campaign on southern and eastern Ukraine after its advance on the capital Kyiv in the early stages of the conflict was thwarted by dogged Ukrainian resistance.

The war of attrition in the Donbas – Ukraine’s industrial heartland – is most critical in the twin cities of Sievierodonetsk and Lysychansk, which straddle the Siverskyi Donets River in Luhansk province.

The battle there is “entering a sort of fearsome climax”, said Oleksiy Arestovych, an adviser to Zelenskiy.

Ukrainian forces were defending Sievierodonetsk and the nearby settlements of Zolote and Vovchoyrovka, Luhansk Governor Serhiy Gaidai said on Thursday, but Russian forces had captured Loskutivka and Rai-Oleksandrivka to the south.

Hundreds of civilians are trapped in a chemical plant in Sievierodonetsk while Ukraine and Russia dispute who controls the bombed-out city.

Moscow says Ukrainian forces in the city are surrounded and trapped. But Gaidai told Ukrainian Television on Wednesday that Russian forces did not have full control of Sievierodonetsk.

Gaidai said all Lysychansk was within reach of Russian fire.

“In order to avoid encirclement, our command could order that the troops retreat to new positions. There may be a regrouping after last night,” he said.

TASS news agency cited Russian-backed separatists saying Lysychansk was now surrounded and cut off from supplies after a road connecting the city to the town Sieviersk was taken.

Reuters was unable to immediately confirm the report.

“Russian forces are putting the Lysychansk-Sievierodonetsk pocket under increasing pressure with this creeping advance … however, its efforts to achieve a deeper encirclement to take western Donetsk Oblast remain stalled,” the ministry said on Twitter.

Zelenskiy said he had spoken to 11 EU leaders on Wednesday about Ukraine’s candidacy and will make more calls on Thursday.

European Union chief executive Ursula von der Leyen, speaking ahead of the two-day EU summit in Brussels, said: “History is on the march.”

She added: “I am not just talking about Putin’s war of aggression. I am talking about the wind of change that once again blows across our continent.”

As well as Ukraine, Moldova and Georgia are also seeking to the join the EU in what would be its most ambitious expansion since welcoming Eastern European states after the Cold War.

Russia has long opposed closer links between Ukraine, a fellow former Soviet republic, and Western groupings like the European Union and the NATO military alliance.

Diplomats say it will take Ukraine a decade or more to meet the criteria for joining the EU. But EU leaders say the bloc must make a gesture that recognises Ukraine’s sacrifice.