For the first time, the Israel Defense Forces participated in a major American-led military drill held in Morocco and nearby African nations, which wrapped up on Thursday, as observers.

The US Africa Command said its joint annual drill with Morocco — dubbed “African Lion” — involved some 7,500 servicemembers and ran between June 6 through 30 in Morocco, Ghana, Senegal, and Tunisia. (The latter of which does not have any diplomatic ties with Israel.)

Joining the host countries were troops from Brazil, Chad, France, Italy, the Netherlands, and the United Kingdom, AFRICOM said.

Israel sent two IDF officers, and the head of the Defense Ministry’s Middle East and North Africa Division at the Policy and Political-Military Bureau, who also serves as the Defense Attaché to Morocco.

“Israel’s participation in the exercise is an additional step in strengthening the security relations between the two countries’ Defense Ministries and militaries,” the ministry said in a statement. 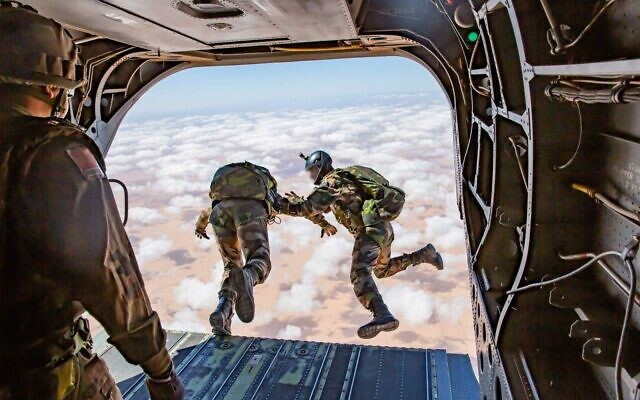 Soldiers jump out of an aircraft during the 2022 ‘African Lion’ drill in Morocco, June 2022. (Christopher Hal via Defense Ministry)

Morocco normalized ties with the Jewish state in December 2020, shortly after similar agreements with the UAE and Bahrain.

In March, senior Israeli military officials wrapped up a first official trip to Morocco, where the sides signed an accord that aimed to have the two militaries collaborate.

“Opportunities for military collaborations were discussed, both training and in the operational and intelligence areas,” the IDF said at the time.

Morocco had cut relations with Israel in 2000, following the outbreak of the Second Intifada, but reestablished ties 20 years later in a deal that saw Washington recognize Rabat’s sovereignty over the disputed Western Sahara.

Sorgente articolo:
In first, IDF officers participate in major drill in Morocco, as observers – The Times of Israel