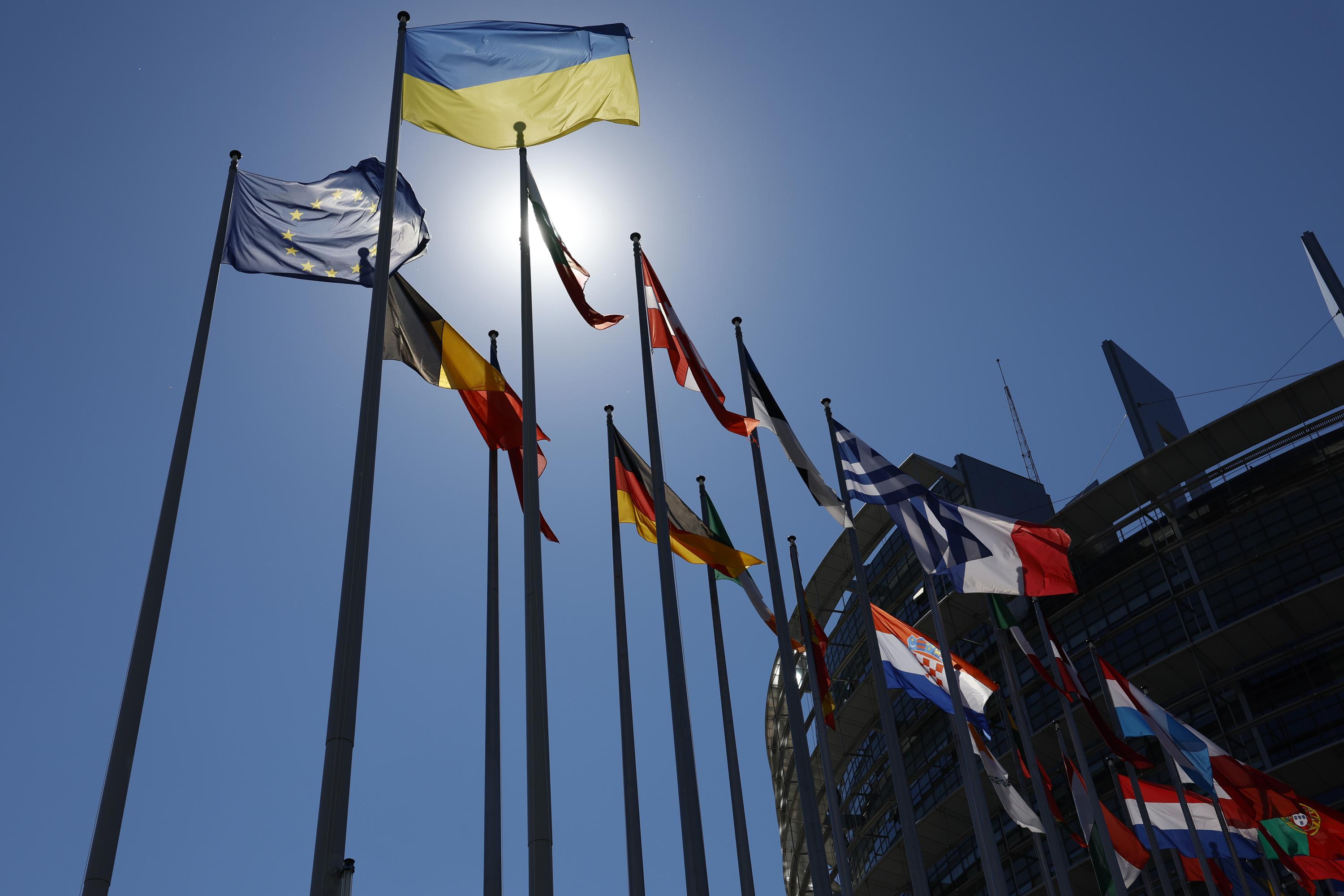 KRAMATORSK, Ukraine (AP) — A day after Russian President Vladimir Putin declared victory in seizing an eastern Ukraine province essential to his wartime aims, a city in the path of Moscow’s offensive came under sustained bombardment, its mayor said Tuesday.

Mayor Vadim Lyakh said in a Facebook that “massive shelling” pummeled Sloviansk, which had a population of about 107,000 before Russian invaded Ukraine more than four months ago. The mayor, who urged residents hours earlier to evacuate, advised them to take cover in shelters.

At least one person was killed and another seven wounded Tuesday, Lyakh said. He said the city’s central market and several districts came under attack, adding that authorities were assessing the extent of the damage.

The barrage targeting Sloviansk underscored fears that Russian forces were positioned to advance farther into Ukraine’s Donbas region, a mostly Russian-speaking industrial area where the country’s most experienced soldiers are concentrated.

Sloviansk has taken rocket and artillery fire during Russia’s war in Ukraine, but the bombardment picked up in recent days after Moscow took the last major city in neighboring Luhansk province, Lyakh said.

“It’s important to evacuate as many people as possible,” he warned Tuesday morning, adding that shelling damaged 40 houses on Monday.

The Ukrainian military withdrew its troops Sunday from the city of Lysychansk to keep them from being surrounded. Russia’s defense minister and Putin said the city’s subsequent capture put Moscow in control of all of Luhansk, one of two provinces that make up the Donbas.

The office of Ukraine’s president said the Ukrainian military was still defending a small part of Luhansk and trying to buy time to establish fortified positions in nearby areas.

The question now is whether Russia can muster enough strength to complete its seizure of the Donbas by taking Donetsk province, too. Putin acknowledged Monday that Russian troops who fought in Luhansk need to “take some rest and beef up their combat capability.”

Russian Defense Minister Sergei Shoigu said Tuesday that the war in Ukraine would continue until all of the goals set by Putin are achieved. However, Shoigu said “the main priorities” for Moscow at the moment were “preserving the lives and health” of the troops, as well as “excluding the threat to the security of civilians.”

When Putin ordered the invasion of Ukraine on Feb. 24, his stated goals were defending the people of the Donbas against Kyiv’s alleged aggression, and the “demilitarization” and “denazifaction” of Ukraine.

Pro-Russia separatists have fought Ukrainian forces and controlled much of the Donbas for eight years. Before the invasion, Putin recognized the independence of the two self-proclaimed separatist republics in the region. He also sought to portray the tactics of Ukrainian forces and the government as akin to Nazi Germany’s, claims for which no evidence has emerged.

The General Staff of the Ukrainian military said Russian forces also shelled several Donetsk towns and villages around Sloviansk in the past day but were repelled as they tried to advance toward a town about 20 kilometers (12 miles) to the city’s north. South of the city, Russian forces were trying to push toward two more towns and shelling areas near Kramatorsk.

Meanwhile, Moscow-installed officials in Ukraine’s southern Kherson region on Tuesday announced the formation of a new regional government there, with a former Russian official at the helm.

Sergei Yeliseyev, the head of the new Moscow-backed government in Kherson, is a former deputy prime minister of Russia’s western exclave of Kaliningrad and also used to work at Russia’s Federal Security Service, or the FSB, according to media reports.

It wasn’t immediately clear what would become of the “military-civic administration” the Kremlin installed earlier. The administration’s head, Vladimir Saldo said in a Telegram statement that the new government was “not a temporary, not a military, not some kind of interim administration, but a proper governing body.”

“The fact that not just Kherson residents, but Russian officials, too, are part of this government speaks clearly about the direction the Kherson region is headed in the future,” he said. “This direction is to Russia.”

— The 30 NATO allies signed off on the accession protocols for Sweden and Finland, sending the membership bids of the two nations to the alliance capitals for legislative approvals. The move further increases Russia’s strategic isolation in the wake of its invasion of neighboring Ukraine in February and military struggles there since. Alliance Secretary General Jens Stoltenberg hailed the signing as a “truly a historic moment for Finland, for Sweden and for NATO.”

— The war in Ukraine has drawn millions of dollars away from countries with other crises. Somalia, which is facing a food shortage largely driven by the war, may be the most vulnerable. Its aid funding is less than half of last year’s level while overwhelmingly Western donors have sent more than $1.7 billion to respond to the war in Europe. Yemen, Syria, Iraq, South Sudan, Congo and the Palestinian territories are similarly affected.

— Spain boosted military spending in an attempt to reach its commitment to NATO to dedicate 2% of gross domestic product to defense. Spain’s Cabinet approved a one-off Defense Ministry expenditure of almost 1 billion euros ($1 billion) that the government said was necessary to pay for unexpected expenses from Russia’s invasion of Ukraine. Spain has sent military and humanitarian aid to Ukraine and deployed more troops and aircraft to NATO missions in Eastern Europe.