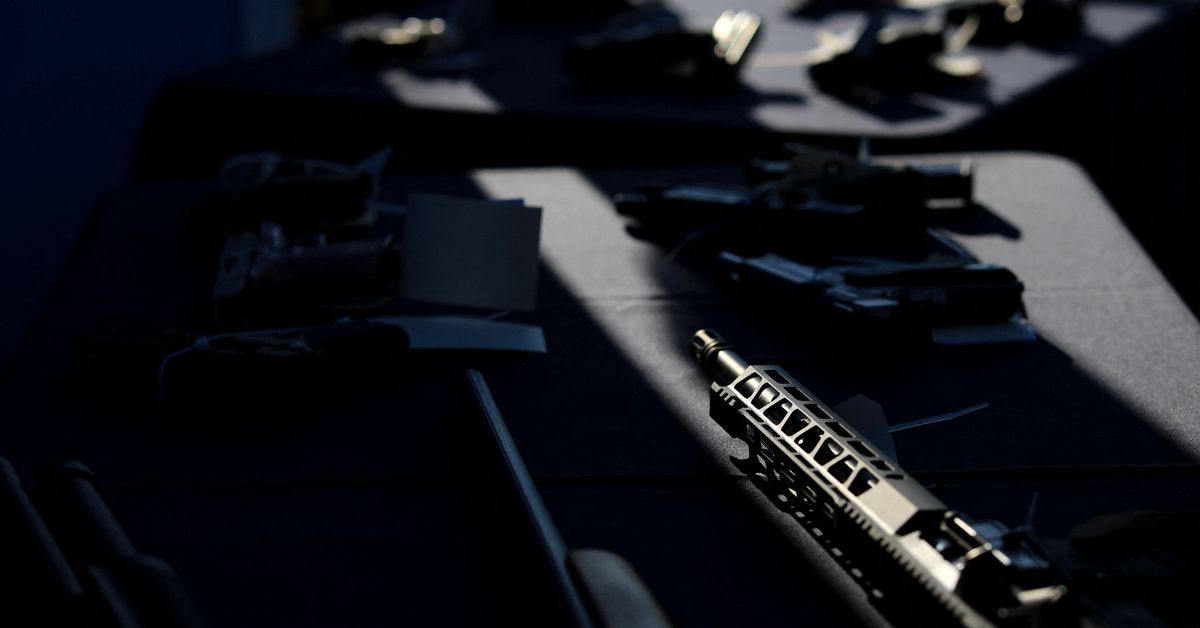 The case of the 31-year-old, indicted last month on charges that could see him jailed for years, illustrates the leading role the Lone Star State now plays in the smuggling of guns used for violence in Canada, and how firearms tracing can help combat that trade.

Canadian police chiefs say such cases also show the limits of their government’s domestically focused policies to fight gun violence, such as a freeze on handgun purchases, when it has the world’s largest civilian gun market on its doorstep.

Canada’s gun homicide rate in 2020 was an eighth of the rate in the United States, where rules on buying firearms are looser, but it’s higher than the rates of many other rich countries and has been rising, according to data from Statistics Canada.

Exclusive data obtained by Reuters for Ontario, Canada’s most populous province, shows that when handguns involved in crimes were traced in 2021, they were overwhelmingly – 85% of the time – found to have come from the United States.

Furthermore, 70% of all traced guns used in crimes in Ontario came from the United States, while so far this year the U.S. share has risen to 73%, according to the data from the Ontario police’s Firearms Analysis and Tracing Enforcement (FATE) program.

Ontario is the only province with a special tracing program that seeks to identify the source of all guns used in crimes, said Scott Ferguson, head of FATE. The rest of Canada traced only 6%-10% of guns involved in crimes, according to 2019 data from the Royal Canadian Mounted Police (RCMP), a federal agency.

On Monday, the Canadian Association of Chiefs of Police called on the federal government to make the tracing of crime guns mandatory across Canada.

“I’m confident that we’ll be making steps in that direction,” said Bray, who co-chairs the association’s special committee on firearms.

Alexander Cohen, director of communications for Public Safety Minister Marco Mendicino, said the government is aware of the importance of tracing guns. “We know that more must be traced, which is why budget 2021 invested C$15 million ($11.7 million) to improve the RCMP’s gun-tracing capacity,” he added.

Yet the method has its own limitations: The Ontario data shows police were unable to trace almost half the firearms they tried to track last year, for reasons including obliterated serial numbers and the lack of a national registry for long guns.

Prime Minister Justin Trudeau’s government introduced new legislation in May to fight gun violence, including the freeze on handgun purchases and a ban on sales of large-capacity magazines. But mandatory tracing is not part of it. read more

The announcement came in the wake of mass shootings south of the border – in Uvalde, Texas and Buffalo, New York. The toll of gun violence was felt closer to home this week when an attacker shot four people in British Columbia, killing two. read more

Mendicino told Reuters the government had Canada’s specific circumstances in mind with the May measures, citing “alarming statistics around increases in handgun violence,” specifically the rising firearm homicide rate.

“We came to the judgment that a national handgun freeze would be the fastest and most effective way to reverse that trend,” Mendicino said.

The Canadian firearms homicide rate has been rising: 2020 and 2017 are tied for the highest since at least 1997, according to Statistics Canada. In 2020, gun murders accounted for close to 40% of the country’s 743 homicides, while more than 60% of gun-related violent crime in urban areas involved handguns.

Canada’s 2020 firearm homicide rate was 5.6 times that of Australia, according to each country’s government statistics. The Canadian rate was also five times that of Germany in 2010, and 2.5 times the rate of the Netherlands, according to a 2016 comparative study published in the American Journal of Medicine.

Ferguson’s team at FATE takes serial numbers and runs them through databases in Canada and, if nothing comes up, in the United States.

Texas has become the top U.S. source of crime-involved guns traced in Ontario, with 150 firearms counted last year – five times the 30 identified in 2018, according to the U.S. Bureau of Alcohol, Tobacco, Firearms and Explosives (ATF), citing FATE numbers. Florida, Georgia, Ohio and Oklahoma round out the top five.

The southern U.S. state has some of the most lenient gun-purchasing laws in America, according to the ATF’s Texas office in Dallas.

Tracing by Canadian authorities provides key intelligence to the ATF, which can then investigate and prosecute buyers of firearms that are subsequently sold illegally or smuggled, said Chris Taylor, ATF attache at the U.S. embassy in Ottawa.

The agency opens about 120 investigations per year in the United States on the basis of guns traced from crimes in Canada, with more than 90% originating from Ontario, Taylor said. The number of cases is rising, with the ATF opening more than 180 probes since October thanks to Canadian tracing, he added.

Jeff Boshek, ATF special agent in charge of the Dallas field division, said he and colleagues were stunned when tracing data started showing that Canada was a growing destination for guns from Texas.

Boshek said that an estimated 30% of all guns purchased in Texas and then traced to crimes committed abroad are linked to Canada, “which is shocking to me” because only a few years ago 100% were linked to crimes in Mexico. Boshek said the Dallas ATF office is currently investigating many traces Canada flagged.

Where Texan smugglers might double their money on a handgun sold in Mexico, they earn 10 times the price of the handgun in Canada, the agent added.

It is also busy: The number of firearms Canada seized at the border more than doubled last year to 1,110 from 495 in 2020 – the highest total since at least 2016, according to numbers provided to Reuters by the Canada’s Border Services Agency.

This year is on track to be almost as high, with 523 firearms seized as of the first week in June.

Gun violence in Toronto, Canada’s most populous city, reached a 15-year high in 2019, with 492 incidents involving firearms, according to police data. That number fell the following two years but 2022 is on track to rise once again.

In Winnipeg, which had the highest firearm homicide rate of any major Canadian city in 2020 – at 1.32 per 100,000 – police have a firearms investigation and analysis section to trace guns involved in crimes.

They can use bullet casings to trace a gun from a Winnipeg shooting to crimes elsewhere, according to Winnipeg Police Inspector Elton Hall, who called the technique a “game-changer.”

Tracing is far from infallible, though: Last year 1,173 guns – about 47% of all those Ontario tried to track – could not be traced at all, up from about 28.5% in 2018. Apart from Canada’s lack of registry for long guns, 3D-printed guns and those with serial numbers that are too damaged cannot be traced.

Toronto Police Detective Sergeant Andrew Steinwall, who has been investigating gun crime in Toronto for more than 15 years, sees efforts to combat gun smuggling as an “unwinnable fight.”

“We don’t have the resources to seize every gun in this country that’s come in illegally,” he said.

Smugglers are resourceful: In May, a drone carrying handguns believed to be from the United States got caught in a residential backyard tree in Ontario’s Port Lambton, just across the St. Clair River from Michigan.

“A drone, a gas tank, an unsuspecting mule … these guys will find a way to get these guns over the border,” Steinwall added. “The demand is here.”

Reporting by Steve Scherer in Ottawa and Anna Mehler Paperny in Toronto; Editing by Denny Thomas and Pravin Char