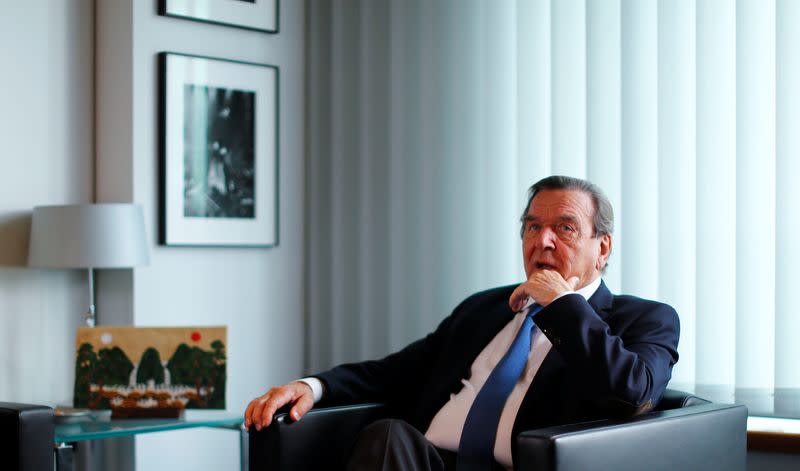 MOSCOW (Reuters) -The Kremlin said on Tuesday that it believes former German chancellor Gerhard Schroeder is in Moscow, and did not rule out possible contact with him.

“As far as we know, he is in Moscow,” Kremlin spokesperson Dmitry Peskov told reporters when asked if the Kremlin was aware of reports that Schroeder had travelled to Moscow on Tuesday.

“There is no meeting as such, but we do not rule out possible contact,” Peskov added.

German broadcaster RTL late on Monday reported that Schroeder was in Moscow, posting a picture of him on its website. Asked by RTL whether he would meet Russia’s President Vladimir Putin, Schroeder was quoted as saying: “I’m on holiday here for a few days. Moscow is a beautiful city.”

Schroeder’s office in Germany did not immediately reply to a request for comment on why Schroeder had travelled to Moscow.

Gazprom on Monday said it would cut gas supply to Germany via the Nord Stream 1 pipeline to just 20% of capacity from Wednesday because of a turbine that it said needed to be halted. Germany rejected that explanation.

Schroeder has been a key figure in energy ties between the two countries, serving as chancellor of Germany from 1998 to 2005 before taking up a controversial position on the supervisory board of Russian state-controlled oil company Rosneft.

He still serves as the chairman of the shareholders’ committee of Nord Stream AG, the operator of the pipeline majority-owned by Gazprom, according to his LinkedIn profile.

A champion of the Nord Stream pipeline which carries Russian gas to Germany under the Baltic Sea, he was nominated for a board position at Gazprom just three weeks before Moscow sent troops into Ukraine on Feb. 24 in what it calls a “special military operation.”

In consternation at the former chancellor’s refusal to distance himself from Putin – including a face-to-face meeting in Moscow in March – Germany’s main political parties in May agreed to strip him of his right to a publicly funded office, closing the taxpayer-funded operation and reallocating staff.

The same month, Schroeder rejected the Gazprom nomination and stepped down from the Rosneft board.