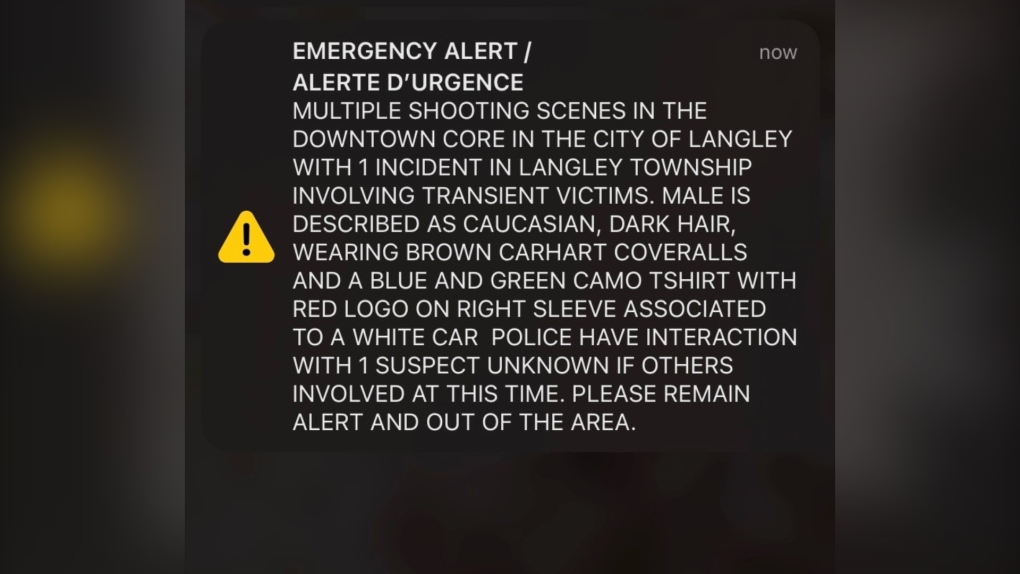 People who were woken up by emergency alerts sent out at a time when police were dealing with the fatal shooting of several people in Langley, B.C., called 911 to register their complaints.

In a message on social media, the province’s main 911 service provider wrote that residents of the province who received the cellphone alert were tying up emergency lines.

“General questions and complaints do not belong on 911,” E-Comm wrote on Twitter Monday afternoon.

“During an alert, only dial 911 if you are experiencing an emergency, or if you have critical information to share about the incident.”

Several others voiced complaints on social media or sent emails to news organizations including CTV News, saying they didn’t understand why they got the alert. Many of those complaints involved being woken up at about 6:20 a.m., when the first message was sent.

“The alert was done at the appropriate time as the information became known to us and a proper assessment was done. That time was the best time that we’re able to issue the alert,” said Sgt. David Lee with the Integrated Homicide Investigation Team (IHIT).

These alerts are expected to become more common as the province expanded its use of the alert ready system this year beyond tsunami warnings and Amber Alerts, which means British Columbians can now expect to receive alerts on floods, wildfires, heat warnings and civil emergencies, such as shootings.

“I think for some people it’s just a matter of getting used to it,” said Jennifer Rice, the parliamentary secretary for emergency preparedness.

Monday’s alert was the second time a public safety alert had been issued by the RCMP in B.C. The first was in November 2021 for another shooting in Vanderhoof.

In a Monday news conference, Public Safety Minister Mike Farnworth said the province will be reviewing the alert system and defended the RCMP’s decisions to issue the alerts.

“They made decisions based on the information that they had, the critical ensuring of public safety, the area where the shootings took place,” he said.

The alert warned the public of multiple shootings in the city and township of Langley. It advised the public of a description of the suspect and that police were unsure if there was more than one shooter.

“Please remain alert and out of the area,” the warning said.

Later, it was confirmed that two victims were killed, two injured, and the suspect was fatally shot by police who responded to multiple scenes across several areas of Langley.

The alert went out at a time when those who work in the area may have been preparing to leave home, and when commuters may have found their routes blocked.

City of Langley Mayor Val van den Broek said it was important for people who live outside of Langley to be alerted, especially since thousands drive to, from and through the city every day.

“If we could save just one person from getting injured or avoid the situation, I think it’s better for all of us,” she said.

According to the most recent data from the Ministry of Transportation and Infrastructure, an average 32,542 vehicles travel the Langley Bypass daily.

“We would always err on the side of alerting too many people versus not alerting enough people or the right people,” said Rice.

“So, while that might be frustrating for some or confusing for some, it’s better than not communicating at all.”