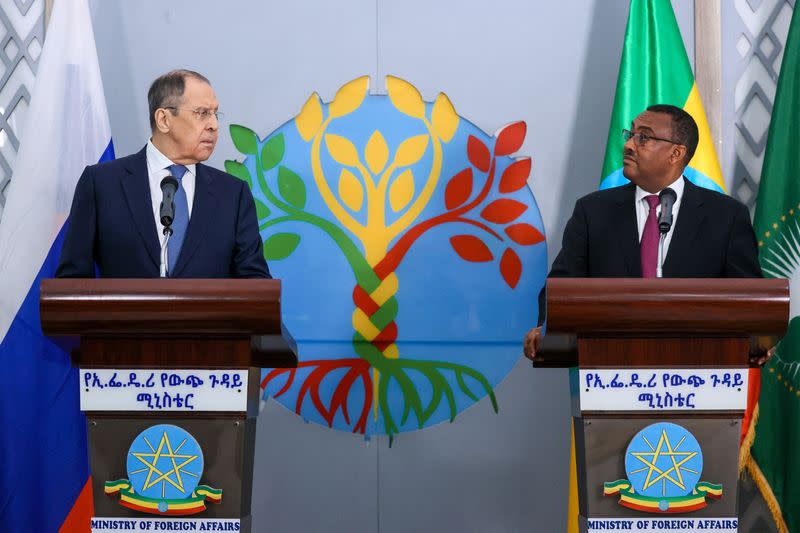 ADDIS ABABA (Reuters) – Russian Foreign Minister Sergei Lavrov said on Wednesday that Moscow supported Ethiopia’s efforts to stabilise its internal political situation in remarks that sought to draw a contrast with what he presented as meddling by the West.

Lavrov was in Addis Ababa wrapping up a four-nation African tour aimed at drumming up support for Moscow at a time of confrontation with Western powers over the Russian invasion of Ukraine.

Most African nations, mindful of economic interests and historical ties with both Russia and the West, have declined to take sides over Ukraine.

Ethiopia was considered a stalwart ally of the West until conflict broke out in November 2020 in its northern region of Tigray. The Ethiopian government has come under pressure from the United States and European Union over its conduct of the conflict, which has killed thousands and displaced millions.

“We confirmed our firm support for those efforts which the government is making to stabilise the situation and launch inclusive national dialogue to solve the key questions,” Lavrov said during a joint media briefing with his Ethiopian counterpart Demeke Mekonnen.

Lavrov described African countries trying to define their own futures and solve their own problems as part of a trend towards a multipolar world which he accused the West of opposing in its pursuit of U.S. hegemony.

Demeke said his country was grateful for “Russia’s unwavering support in helping us in safeguarding Ethiopia’s sovereignty”.

The Ethiopian government has accused its foreign critics of seeking to unduly interfere in its internal affairs.

Presenting Russia as a respectful friend to Africa, as opposed to overbearing Western powers with a colonial mindset, was a leitmotif of Lavrov’s remarks during previous stops in Congo Republic and Uganda.

He expanded on the theme during a half-hour speech to diplomats at the Russian embassy in Addis Ababa in which he presented the Russian government’s positions on Ukraine and international relations in general.

“I am sure the overwhelming majority of world countries do not want to live as if the colonial times (have) come back,” he said.

The Russian embassy declined to say which ambassadors had been invited to the event. Questions were asked by diplomats from South Sudan, Algeria and Pakistan before Lavrov left.