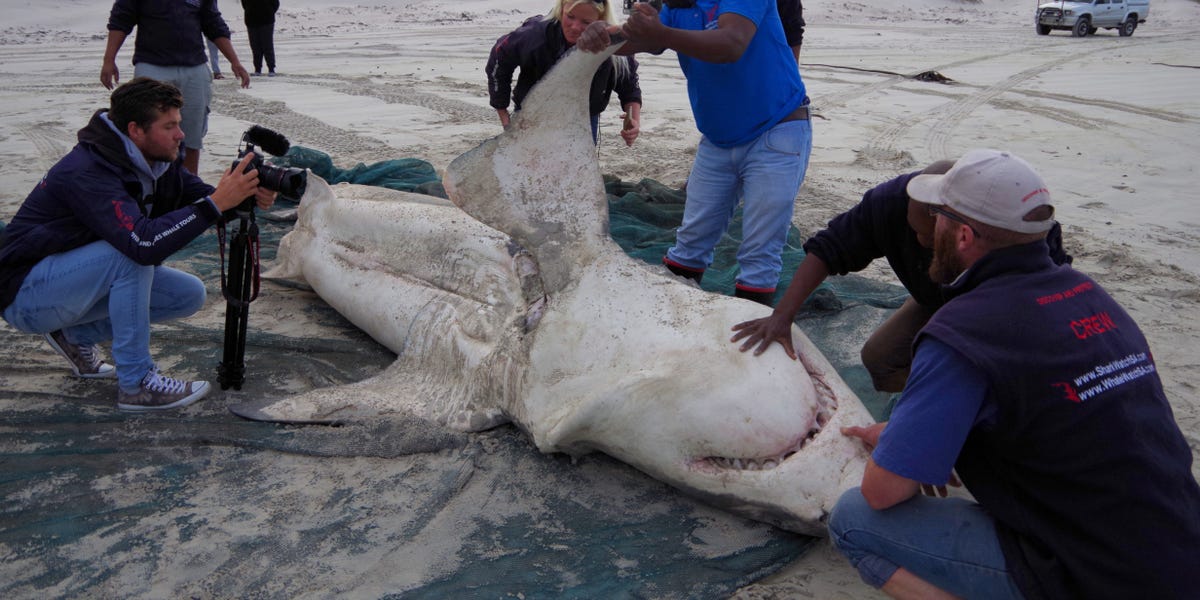 Stunning drone footage captured earlier this year off the coast of South Africa shows three orcas in the midst of killing a great white shark — supporting a theory that says the apex predator has been driven out of its typical habitats.

The footage, which was captured for Discovery Channel’s Shark Week and is set to air on Thursday, was published by The Daily Beast on Wednesday.

The video begins by showing two orcas swimming near the surface in the bright teal water of South Africa’s Mossel Bay, which is known for its great whites.

Suddenly, a third orca rises from the depths, carrying a 9-foot-long great white shark in its mouth. As the orca reaches the surface, blood pools around the dead shark. The orca carrying the shark dives back below the surface.

Alison Towner, a scientist based in South Africa who studies great whites, told The Daily Beast it was “the world’s first drone footage of killer whales predating on a white shark.” She added it’s the first “direct evidence” of the phenomenon to be documented in South Africa.

“It’s probably one of the most beautiful pieces of natural history ever filmed,” she said.

Great white sharks are considered apex predators, meaning they have no known predators, however researchers have identified rare occurrences of them being preyed upon by orcas.

A study published by the African Journal of Marine Science in June, for which Towner was an author, suggested that great white sharks had been fleeing a common aggregation site in South Africa due to the presence of killer whales.

The researchers noted carcasses of dead great whites had been washing ashore with their livers ripped out, and for some, without their hearts. The wounds on the sharks suggested they had been made by the same pair of orcas, according to the study.

In the newly released drone footage, the orca is holding the shark near where its liver is.

The authors believed the attacks had prompted the migration of great whites out of the area.

“What we seem to be witnessing though is a large-scale avoidance strategy, mirroring what we see used by wild dogs in the Serengeti in Tanzania, in response to increased lion presence,” Towner said at the time.

The study authors said the decrease in great whites in the area may have contributed to the increase in another predator, the bronze whaler shark, though they noted that species, too, was being hunted by the orcas.

“Predator-prey interactions between white sharks, other coastal sharks, and killer whales are increasing in South Africa and are expected to have pronounced impacts on the ecosystem,” the study said.

The drone footage is expected to air Thursday during the special “Shark House” on Discovery and Discovery+.