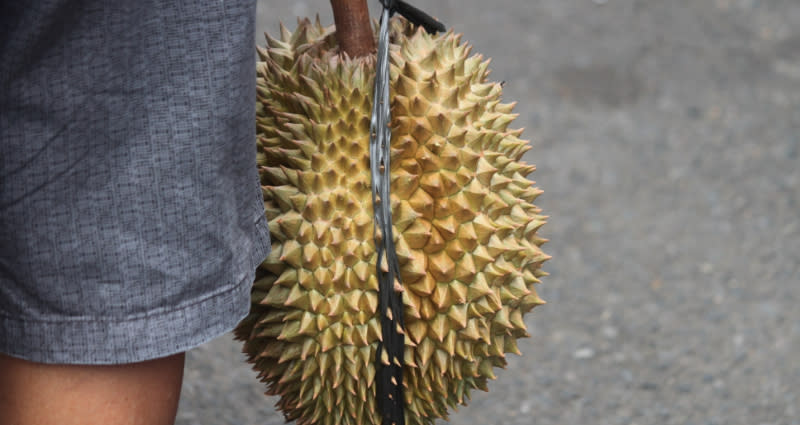 A woman was left with a bloody face after she was smacked with a durian by a debt collector in Lamphun province, Thailand.

The Thai woman, identified as Duangduen, parked her motorbike in front of the Chang Rong Temple in the Nai Mueng subdistrict to answer a phone call when she was allegedly slapped in the face with a spiky durian peel on July 17 by a woman she said was her debt collector.

The attacker reportedly fled the scene in a pickup, leaving Duangduen with a bloody face.

Duangduen has since called on local media for help after there were no developments in the complaint she filed at the Mueng Lamphun Police Station after the incident.

More from NextShark: Armed robbers pistol-whip man to get his $60,000 Rolex at 99 Ranch in Rowland Heights

Duangduen said the COVID-19 pandemic affected the income of their shop, which caused her to miss repayments. The loan shark reportedly sold the arrears to debt collectors who then threatened Duangduen and her friend and raided their homes. The debt collector tricked the women by informing them that borrowing more money would help clear their debt’s interest. However, the new terms only escalated to a demand of 20,000 baht (approximately $545.44) repayment per day.

Duangduen’s friend reportedly fled out of fear and left her to deal with the consequences.

More from NextShark: Suspect in murder of elderly Asian man in LA had mental issues that ‘came out of nowhere’, uncle says

The debt-ridden woman has since contacted an official government department that deals with debt management for help. The lender reportedly agreed to pause the repayment but later reappeared at her home to demand money.

Duangduen said she is still being threatened by the debt collector.

More from NextShark: 4 arrested, including 15-year-old, for brutal attack on Chinese PhD student near UW-Madison

Thai Buddhist monk to charitably donate $500,000-plus fortune he won from a lottery

Sorgente articolo:
Woman suffers bloody face after getting smacked with a durian by a debt collector in Thailand – Yahoo News