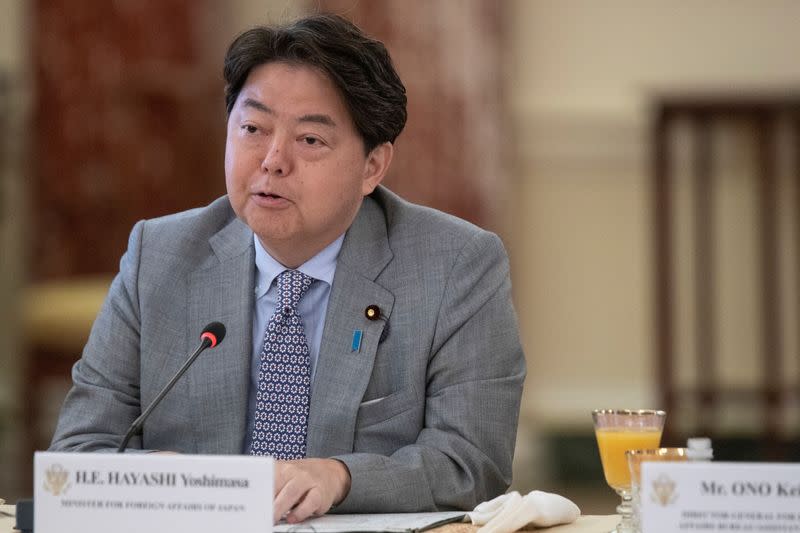 By David Brunnstrom and Kiyoshi Takenaka

WASHINGTON (Reuters) -Japan’s Foreign Minister Yoshimasa Hayashi sounded the alarm about China’s behavior in the Indo-Pacific during a visit to Washington on Friday, saying the “logic of brute force” was gaining more traction over the rule of law in the region.

In a speech at a Washington think tank, Hayashi referred to Russia’s invasion of Ukraine and said such moves should never be allowed elsewhere. He said it was essential that it go down as “clear failure,” or other countries would attempt to change the status quo by force.

Referring to Chinese and Russian joint bomber flights near Japan in May, Hayashi said stronger military coordination between China and Russia was emerging as a security concern.

“We are currently standing at a historical crossroads, one fraught with a sense of crisis,” he told the Center for Strategic and International Studies. “We are facing a watershed moment.”

“Even in this region, the logic of brute force is gaining more traction over the rule of law, and the strategic balance in the region is increasingly a challenge for Japan and the U.S.,” he said, referring to the Indo-Pacific.

Hayashi said “ongoing unilateral attempts to change the status quo by force or coercion in the East and South China Seas” were of growing concern and referenced mounting China-Taiwan tension by saying that stability across the Taiwan Strait was of “extreme importance.”

Hayashi largely avoided mentioning China by name but said it was essential to maintain a “high-level, candid dialogue” with Beijing and that cooperation was also important with it when necessary, such as on climate change and North Korea.

In a question-and-answer session after his speech, Hayashi said he believed there would be an opportunity for him to see his Chinese counterpart Wang Yi at ASEAN-related ministerial meetings in Cambodia next week.

Hayashi also said there was an urgent need to strengthen the deterrence and response capabilities of the Japan-U.S. alliance and said the Tokyo government planned to substantially increase defense budgets and fundamentally strengthen defense capabilities within five years.

Hayashi, who was in Washington to launch a new “two-plus-two” economic dialogue with the United States, said it was necessary to keep all options, including “counterstrike capabilities,” on the table and to strengthen high-tech defense capabilities.

He also said it was crucial that the credibility of the U.S. extended deterrence be strengthened – a reference to the U.S. nuclear weapons umbrella that protects allies including Japan – while calling on China, which he said was “rapidly building up its nuclear force in an opaque manner,” to take part in efforts to reduce nuclear risk.

(Reporting by David Brunnstrom and Simon Lewis in Washington and Kiyoshi Takenaka in Tokyo;Editing by Mary Milliken and Chizu Nomiyama)