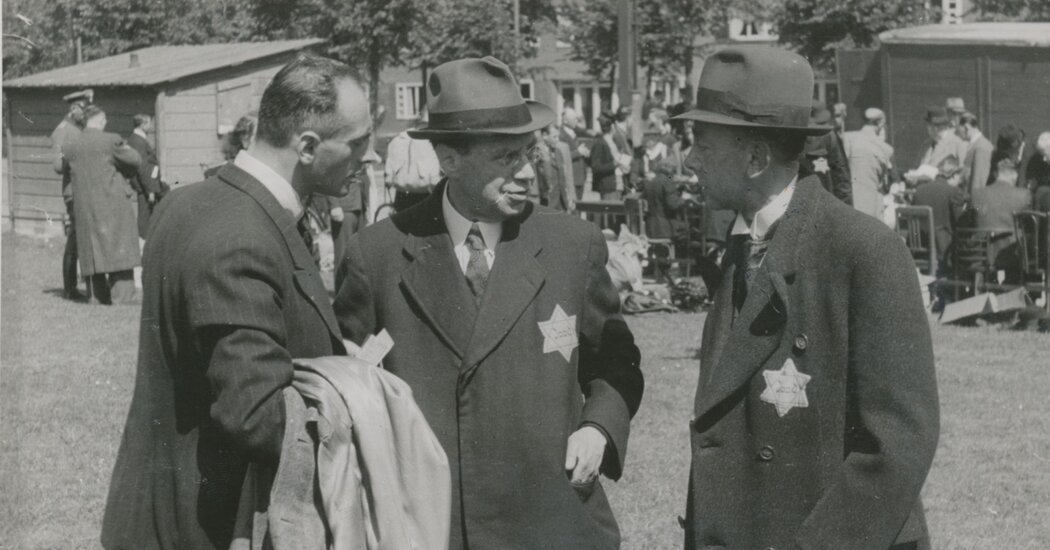 AMSTERDAM — On June 20, 1943, bewildered and terrified families, laden with baggage and branded with yellow stars, were forced into Olympiaplein, one of this city’s most recognizable public squares. Few knew where they were going, or for how long, so they wore their winter coats despite the blazing sun as they registered with the Nazi authorities.

A Dutch photographer, Herman Heukels, moved through the crowd, taking pictures of people who would soon be deported to concentration camps. His images would be the final portraits of many of these people, who were among 5,500 sent that day from Amsterdam to Westerbork transit camp, and then on to “the east.” The vast majority would never return.

Heukels’s photos are some of the strongest visual evidence used by historians to illustrate the Holocaust in the Netherlands, which took the lives of more than 102,000 of the estimated 140,000 Jewish civilians who lived in Holland before World War II.

Yet despite their ubiquity in books and films, few people outside of scholarly circles know that these images were actually taken by a Dutch Nazi. He intended to depict Jews in a demeaning light. Instead, he ended up paying stark witness to the atrocities of the Third Reich.

“These are very famous photos, some of the most requested photos in our archive from across the whole world,” said René Kok, a researcher at the NIOD Institute for War, Holocaust and Genocide Studies in Amsterdam. The institute holds an archive of about 30 original Heukels photos from the Dutch Ministry of Justice, which confiscated them as part of his postwar collaboration trial.

In recent months, a deeper sense of Heukels’s beliefs and motivations has emerged from a biography published in Dutch this spring that reveals how an ordinary young man from Zwolle became radicalized as a member of the Dutch Nazi party. The book, by Machlien Vlasblom, a Dutch World War II historian, provides new insights into how Heukels betrayed Jewish people from his town, looted their businesses and property, and recorded their history as a press photographer for the Dutch S.S.

“He captured them at their weakest moments,” Vlasblom said in an interview, “and the way he acted there was rude and brutal. Of course, he put the Nazi ideology into these images.”

How does this new information change the way we might look at these photos? Or how historians might use them, or contextualize them in the future?

The photos are “quite exceptional,” said a NIOD researcher, Kees Ribbens, a professor of Popular Historical Culture and Mass Violence at Erasmus University Rotterdam, because they “show the Holocaust taking place in a very well-known place in the center of Amsterdam. They show how the whole bureaucracy of deportation worked.”

Yet, these are “not innocent images,” said the Amsterdam-based Israeli artist Ram Katzir, who recently used one of Heukels’s pictures as the foundation for a memorial he created for the site of deportations. The artwork, “Shadows,” unveiled on the 79th anniversary of the raid in June, reproduced the shadows of the deportees from the photos, in the exact locations on Olympiaplein where they were last documented alive.

“We had no names of any of the victims,” said Katzir, so he deliberated a lot about whether to include Heukels’s name on the information plaque. In the end, he decided to do so. “It’s a double-edged image; and if you hide that, you hide the role of the collaborator.”

Katzir added, “When you look at the information plaque, you’re standing exactly where the photographer stood.”

In fact, a majority of the surviving images of Jewish persecution in the Netherlands were “made from the point of view of the persecutor,” Ribbens said. These include those by Bart de Kok, a member of the Dutch Nazi Party, known as N.S.B., and a German press photographer, Franz Anton Stapf, who captured some of the last images of Amsterdam’s Jewish community before it was decimated.

Janina Struk, author of the 2005 book “Photographing the Holocaust: Interpretations of the Evidence,” said that in the postwar period, photos taken by bystanders, perpetrators and victims were “all kind of mixed together,” and hardly anyone asked who had shot the photos or for what purposes.

“Until quite recently, historians have not really been so concerned about who took the pictures, and why they took them and what they were for,” she said. “It’s been rather historians using pictures as illustrations of a text, rather than being a text themselves.”

In recent years, she added, there has been a greater emphasis on contextualizing the images, explaining how they were made, so that viewers have a better understanding of what they’re looking at — and so people can make better ethical choices about how to present them.

Ribbens said that in learning that Heukels’s aim was to publish his photos in Storm S.S., a Dutch Nazi propaganda weekly (they were never published there), we can think about what he chose to leave out of the frame. In his series, he said, we don’t see the Nazi officials or the Dutch police who were forcibly rounding up civilians.

“It doesn’t automatically raise the question: Who organized this, who is responsible for this persecution?” he said. “People show up, and it’s not clear what kind of stress they’re under, why they’re sent here, what choice did they have in leaving their homes, why they didn’t find a hiding place? What was so threatening about it?”

The official policy of the German occupiers was that no images of Jewish people could be published in the “legal” Dutch press, explained NIOD researcher and photography expert Erik Somers. Propaganda newspapers, however, could print such images alongside articles with expressly antisemitic content.

As a result, a high proportion of Holocaust images, both in Holland and elsewhere, were taken by Nazi-endorsed propaganda photographers who had explicit permission to carry cameras, Struk said. Other images came from German soldiers who specifically sought out “souvenir” images of Jews who they thought fit a physical stereotype.

“We know that the Germans used photography as a weapon, and they invested a great deal in propaganda photography,” said Sheryl Silver Ochayon, program director for Echoes & Reflections, an educational arm of Yad Vashem World Holocaust Remembrance Center in Israel.

“Photographs never killed anyone,” she added, “but what photographs can do is they can justify an ideology. If you present your victims as low or passive, or like vermin, you can justify a genocidal plan of action, as the Germans did.”

Vlasblom began her research when a friend from church, Gerard Visser, asked her to look at a box of family letters he had inherited. Although he knew the papers concerned his two great-uncles, Herman Heukels and Jan Heukels, who was also a Nazi collaborator, he said in an interview, “I didn’t really know the family structure, so I didn’t know who sent what to whom or why.”

Not everyone in Visser’s family is pleased that Vlasblom’s book, “We waren supermannen (We Were Supermen)”, which also includes information about Jan Heukels, called attention to these two ancestors who were collaborators.

“You hear all the heroic resistance stories from Holland,” Visser said, “but there are people like the Heukels, who really did bad things. I felt that part of a country’s history should also be told.”

Does knowing more about Herman Heukels’s personal biography imply that historians should use these photographs in a different way — or even use them less often?

Somers from the NIOD, the Dutch archive, said these images continue to be a valuable historical source, but the Heukels’ story underscores the importance of providing context to pictures.

“You have to find out from the beginning the elements of those photos,” he said, “who made the photo and for what purpose, and in what context?”

Struk added, “We need to move away from the idea that a photograph is just a window on the world. It isn’t. It’s a very edited version of what the photographer chose to photograph.”

Sorgente articolo:
Photos That Helped to Document the Holocaust Were Taken by a Nazi – The New York Times