The horrifying slaughter of over 100 dolphins yesterday has been strongly condemned by animal rights groups.

The massacre on the Faroe Islands was so bloody it turned the sea dark red as the bottlenose dolphins were stabbed with spears and hauled onto the shore.

Residents of Skálafjörður herded the dolphins into a bay and penned them in before wading into the shallows to stab them with spears, hooks and knives.

The animals were stretch out on a pier, with many of them cut to pieces on the shore.

The ‘hunt’ comes just weeks after the Faroe government set an annual catch limit of dolphins to 500 a year, and less than a year after 1400 Atlantic white-sided dolphins were killed in one weekend. 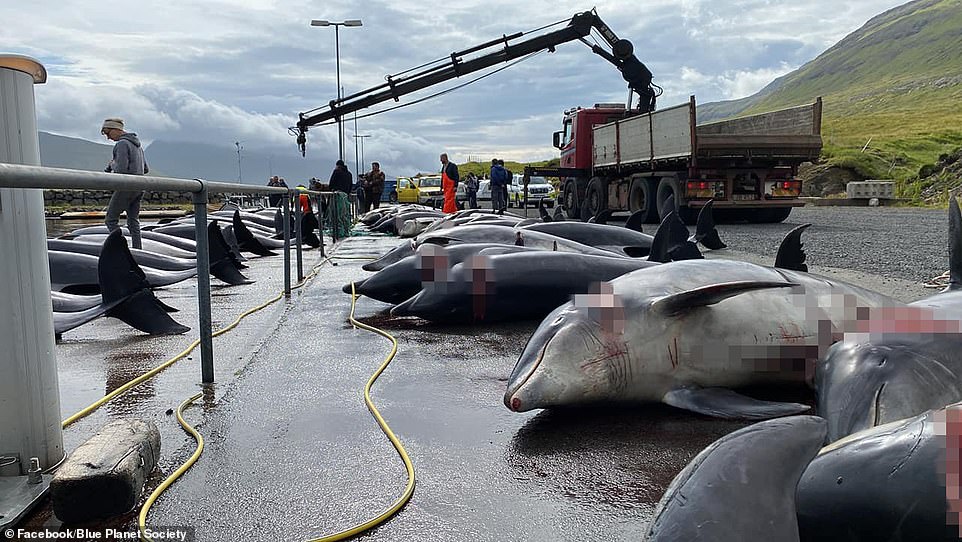 The killing of dolphins and whales has long been defended by many on the Faroe Islands, who see it as part of their culture and tradition 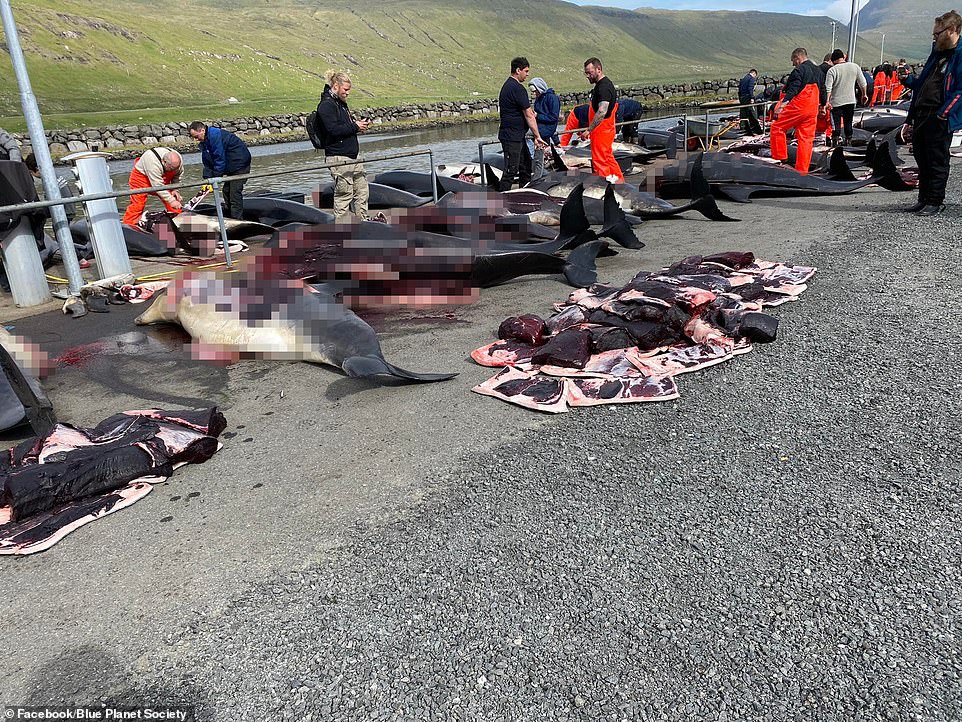 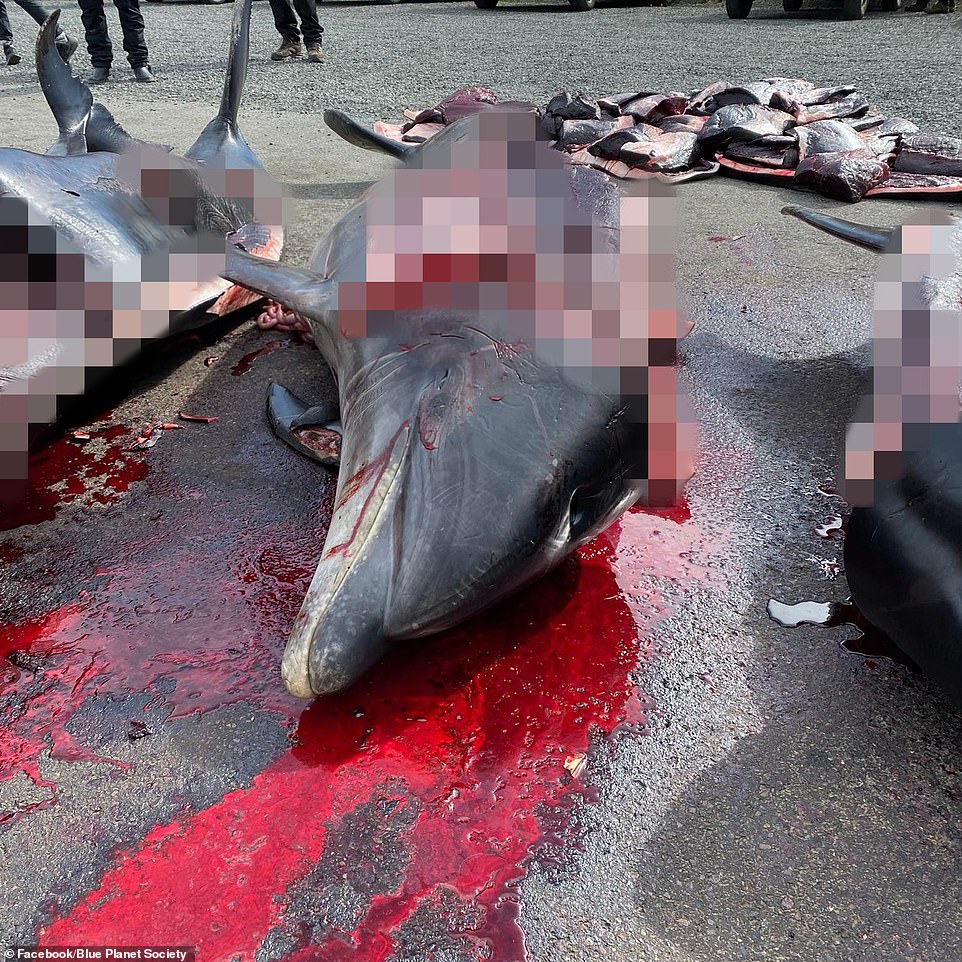 Conservation group The Blue Planet Society condemned the incident, saying: ‘This is nothing short of outrageous and a new low, even by Faroe standards’

Residents claim the mass-killing of dolphins is an important part of their tradition and history, and supplements the islanders’ diet.

However, animal rights groups have branded the practice ‘barbaric’ and an ‘ecocide’.

The Blue Planet Society, a conservation group, condemned the massacre on social media – sharing graphic photos of the dolphins.

‘Some of these bottlenose dolphins could be the same animals that bring so much joy to people in the UK and elsewhere.

‘The Faroes have no right to kill these highly-intelligent animals, they belong to everyone. 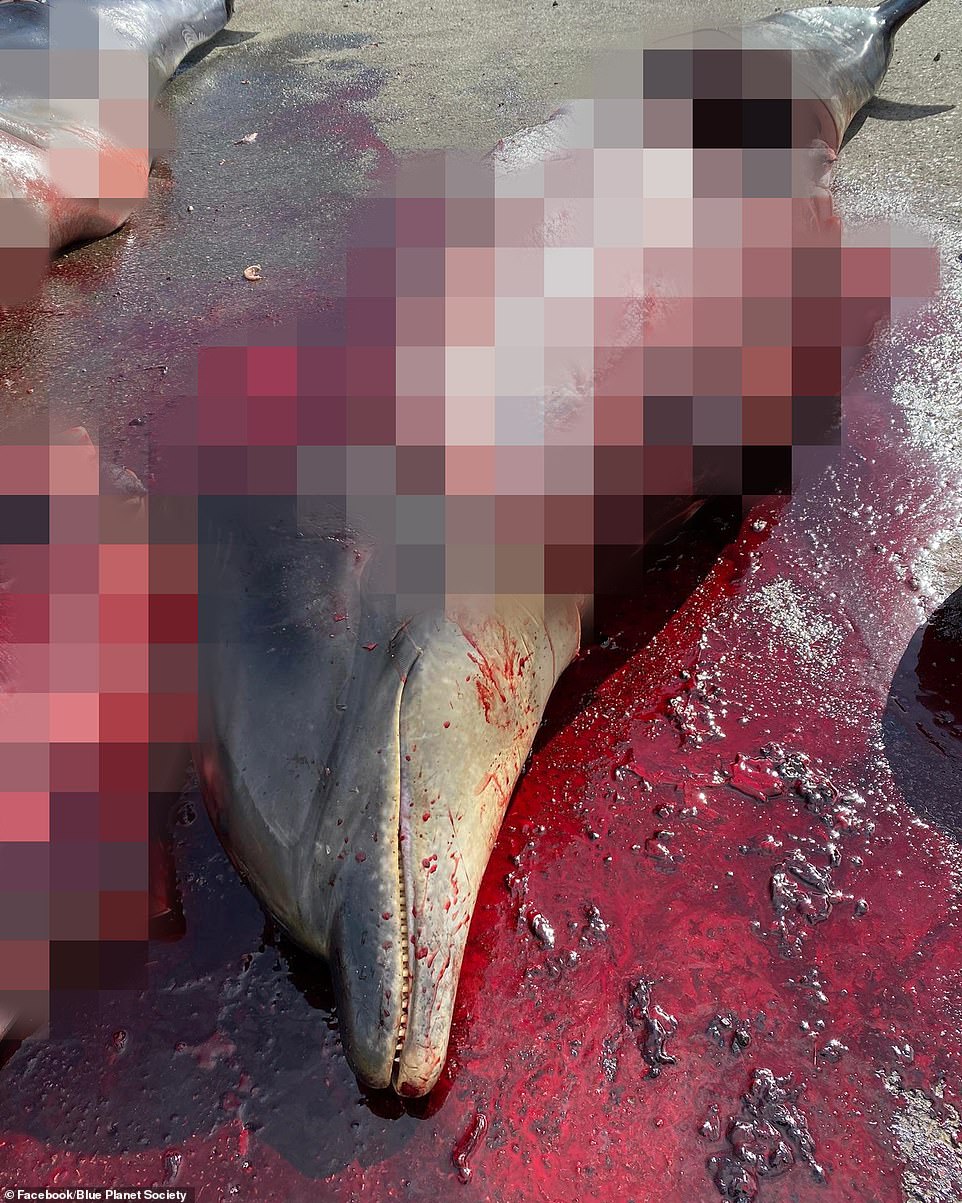 The highly-intelligent mammals were herded into a bay on the Faroe Islands before being stabbed with spears, knives and hooks 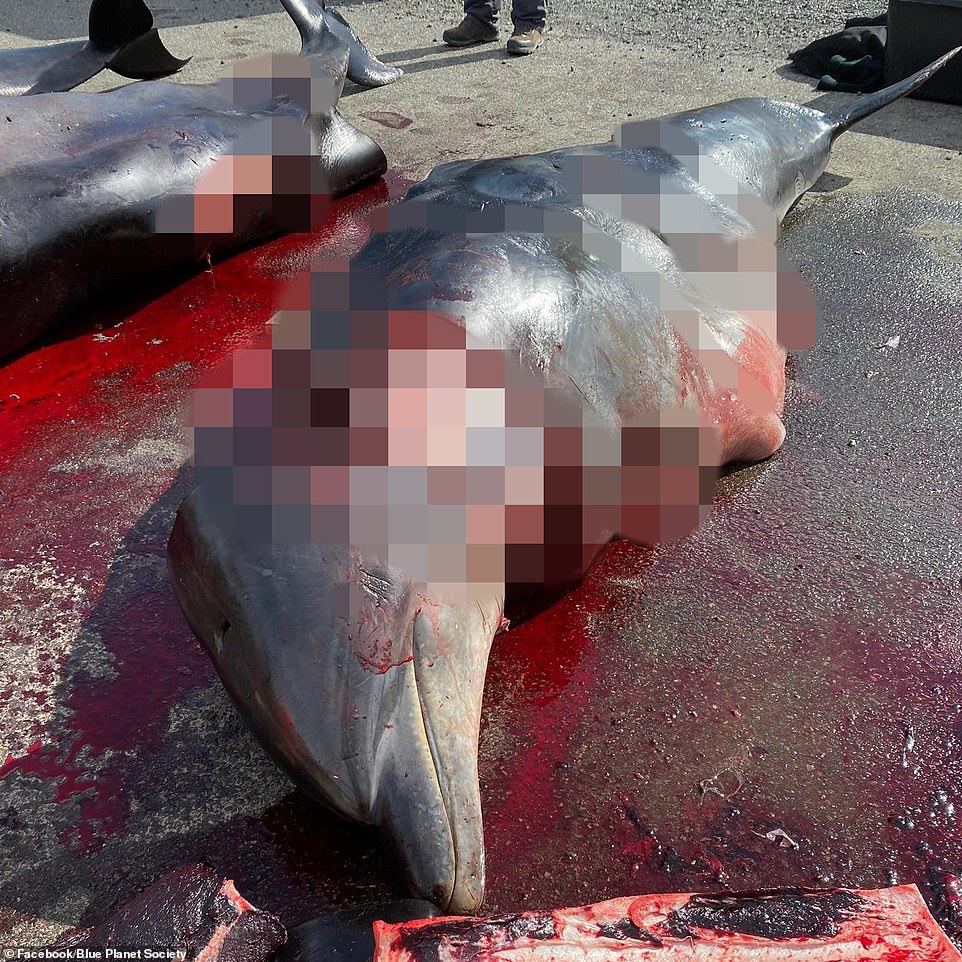 The killing of 100 dolphins on July 29 comes a year after 1,400 were killed in a single weekend

‘This is nothing short of outrageous and a new low, even by Faroe standards.

‘If the UK, Denmark and the EU do not take action to stop the utterly irresponsible slaughter of highly protected species now, then they are complicit in this ecocide.’

The island’s whaling sheriff said the hunt was the first time dolphins were killed with a spear designed to reduce suffering. However, experts have questioned whether using the spear is more humane.

Astrid Fuchs, policy manager at Whales and Dolphin Conservation (WDC) called for action to be taken against the Faroe Islands over the dolphin killings.

He said: ’The killing of 100 of these dolphins is a political signal to show the world that the dolphin hunters in the Faroe Islands don’t care about the opinion of their own people or the international community.

‘We very much hope that the UK and the EU will respond to this position with the necessary diplomatic and economic pressure.’

The WDC also claimed a poll showed most Faroese were against the hunts – largely because dolphin meat is not in high demand and the animals are not part of the islands’ traditional whale grinds.

The charities both said they would work to try and end the dolphin killings in future.