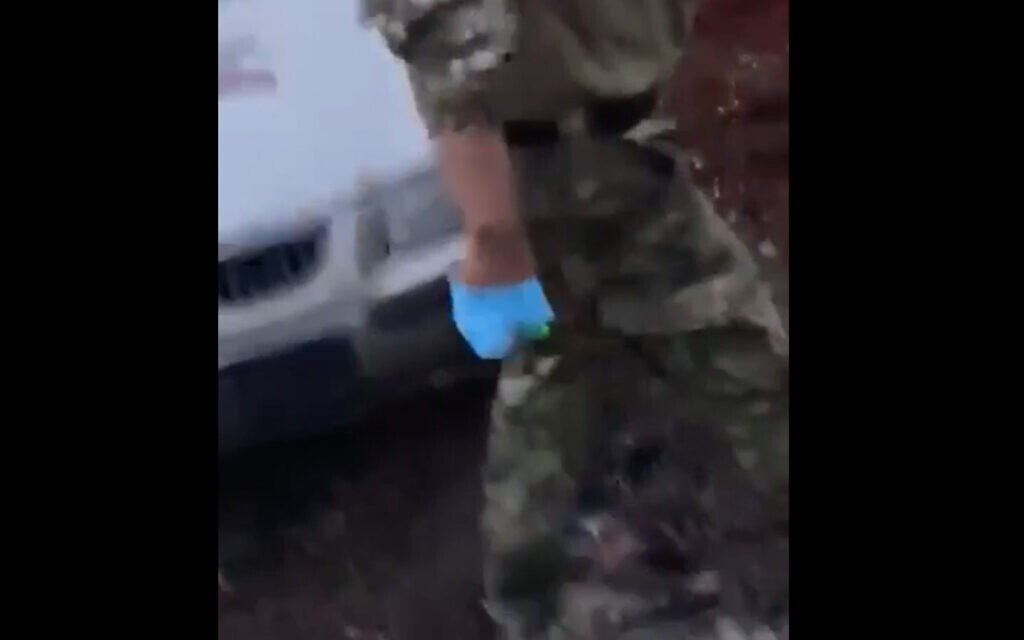 In the graphic video, a soldier wearing blue surgical gloves and a distinctive wide-brimmed black hat stomps on the head of a prisoner lying facedown on the ground. Another soldiers stands on the prisoner’s legs.

The prisoner is wearing camouflage, with part of the pants cut away, and his hands are bound behind his back. A blue and yellow patch on his shoulder identifies him as Ukrainian.

The assailant then mutilates the prisoner using a box cutter-type knife with a green handle, while his victim lies splayed on the ground, struggling. The soldier in the hat removes the bloody body part, lifts it for the camera and tosses it aside.

The soldier with the knife and his colleagues speak Russian in the footage, which was first circulated on pro-Russian channels on the Telegram messaging app.

It was unclear when and where the video was filmed, and it has not been definitively verified by official sources.

The attacker’s face was not visible in the video, but investigators were attempting to identify him based on his clothing, hat and other details.

It was unclear what happened to the castrated soldier afterward. The UN Human Rights Monitoring Mission said that in another video, the soldier appeared to have been shot in the head and dragged into a ditch.

The video elicited shock, horror and condemnation after it circulated on Thursday and Friday.

“The fog of war will not help the Russian executioners avoid punishment,” he said. “We will identify and get to each of you.”

Ukrainian parliament member Inna Sovsun said the Russian troops were from the Chechen Ahmat unit and called for international action.

Marie Struthers, Amnesty International’s director for eastern Europe and Central Asia, said, “This horrific assault is yet another apparent example of complete disregard for human life and dignity in Ukraine committed by Russian forces.”

Russia has not commented.

Russian troops have been accused of widespread atrocities during their invasion of Ukraine against both opposing soldiers and civilians.

On Friday, Moscow and Kyiv accused each other of shelling a prison holding Ukrainian war prisoners in an area of eastern Ukraine held by pro-Russian separatists.

The attack on the prison in Olenivka killed 53 Ukrainian POWs who fought in Mariupol and wounded another 75.

Both sides said the assault was premeditated with the aim of covering up atrocities.

After the massacre, Russia’s embassy in the UK said that soldiers from Ukraine’s Azov battalion, which was central to the fight in Mariupol, should be executed.

“[Azov] militants deserve execution, but death not by firing squad but by hanging, because they’re not real soldiers. They deserve a humiliating death,” the embassy wrote on Twitter.