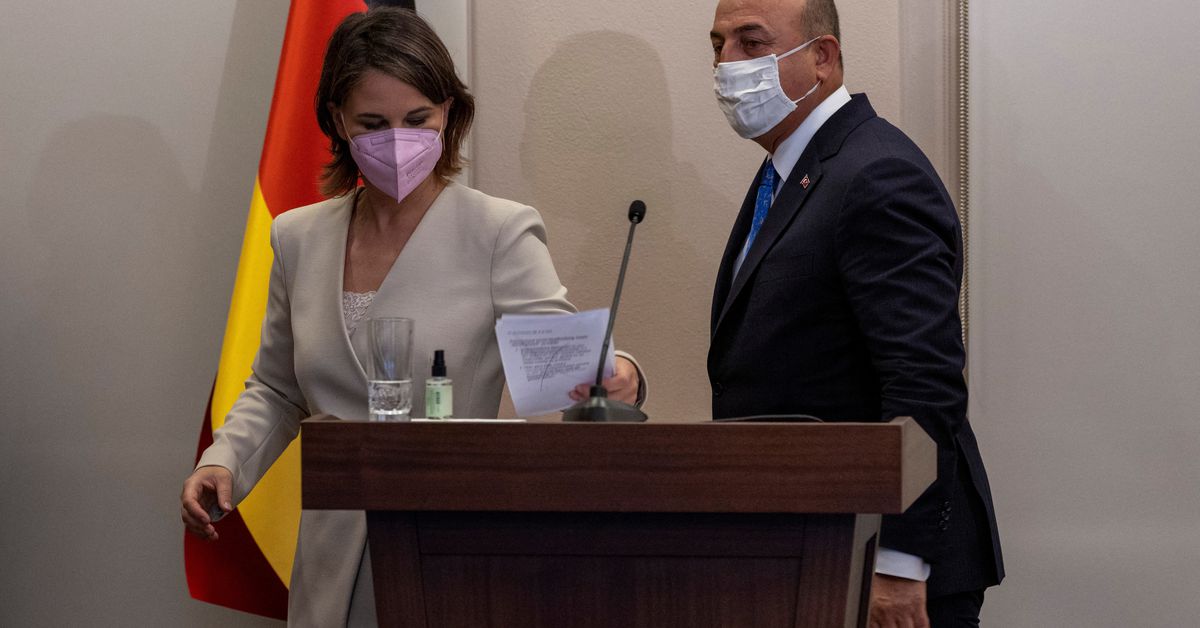 ISTANBUL, July 29 (Reuters) – Turkish and German foreign ministers argued over a range of issues in a tense and drawn-out news conference on Friday, trading barbs over disputes between Ankara and Athens, jailed Turkish philanthropist Osman Kavala and Kurdish militants.

The news conference, which began an hour later than scheduled and ran for an hour, started off with calm remarks by the two ministers but became increasingly testy as they criticised each other’s policies.

Turkey’s Mevlut Cavusoglu said Germany had lost its impartiality in mediating between Turkey, Greece and Cyprus, adding that it should listen to all sides without prejudice.

“Third countries, including Germany, should not be a tool to provocation and propaganda especially by Greece and the Greek Cypriot side,” he said during the news conference in Istanbul.

Relations between Athens and Ankara are strained over a raft of issues ranging from overflights to competing claims for offshore waters.

Cyprus, which was partitioned in 1974 when Turkey invaded its northern third in response to a brief Greek-inspired coup, is a main point of division.

Baerbock later turned attention to philanthropist Kavala and called on Turkey to implement rulings by the European Court of Human Rights (ECHR).

“It is my responsibility as foreign minister to respect and defend rulings of the ECHR, without exception and at all times,” she said, adding that Kavala should be freed.

The ECHR said this month that Turkey had not implemented the 2019 ruling over Kavala, as part of infringement proceedings, which could see Ankara suspended from the Council of Europe, a human rights watchdog. read more

Cavusoglu responded by saying Greece, Norway and Germany had also not implemented other rulings by the ECHR and accused Germany of funding Kavala. Kavala was sentenced to life in prison without parole in April on charges of financing 2013 nationwide “Gezi” protests in what rights groups say was a political trial.

“Why do you constantly bring up Osman Kavala? Because you are using Osman Kavala against Turkey. We know how much he was funded during the Gezi events,” Cavusoglu said.

The ECHR ruled in 2019 that Kavala’s detention aimed to silence him and evidence was not enough to support the charges against him.

Cavusoglu also criticised Berlin for “embracing” Kurdish militants. Baerbock said Germany, as well as the European Union, treats the Kurdistan Workers Party (PKK), which has waged a decades-long insurgency against Turkey, as a terrorist organisation.

Reporting by Ali Kucukgocmen in Ankara and Maria Sheahan in Berlin; Additional reporting by Ezgi Erkoyun in Istanbul; Editing by Catherine Evans and Grant McCool