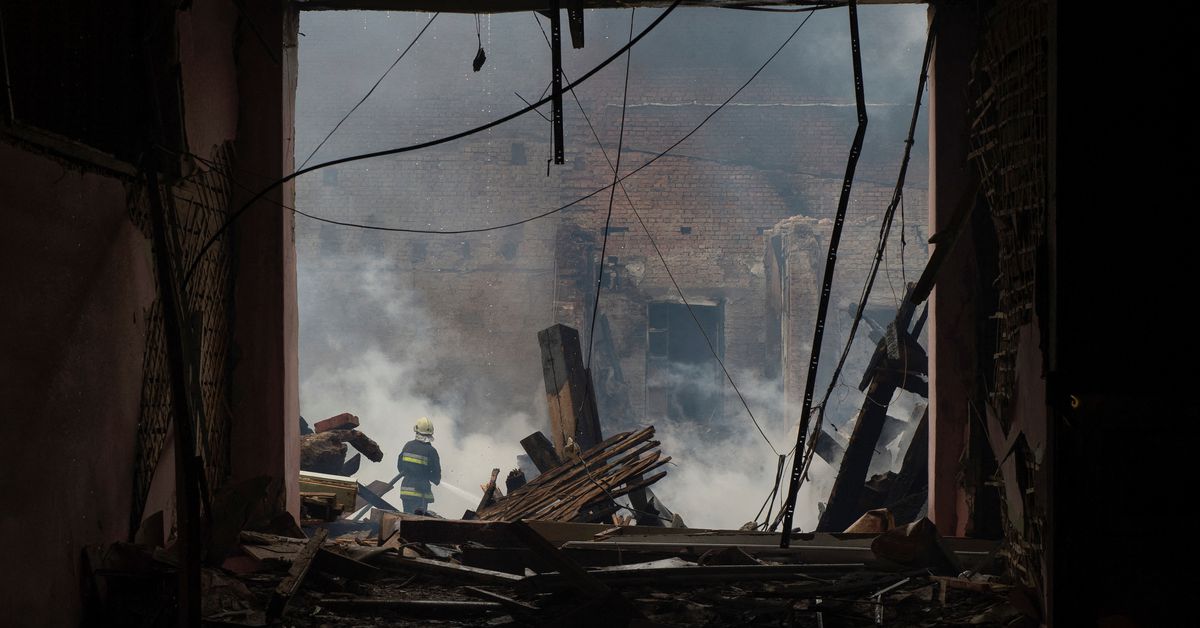 KYIV, July 30 (Reuters) – The Ukrainian military said on Saturday it had killed scores of Russian soldiers in fighting in the south, including the Kherson region that is the focus of Kyiv’s counter-offensive in that part of the country and a key link in Moscow’s supply lines.

South of the town of Bakhmut, which has been cited by Russia as a prime target in the eastern region of Donetsk, the Ukrainian military said Russian forces had been “partially successful” in establishing control over the settlement of Semyhirya by storming it from three directions.

“He established himself on the outskirts of the settlement,” the military’s evening report said, referring to Russian forces.

Defence and intelligence officials from Britain, which has been one of Ukraine’s staunchest allies since Moscow launched its invasion on Feb. 24, portrayed Russian forces as struggling to maintain momentum.

Ukraine’s military said more than 100 Russian soldiers had been killed and seven tanks destroyed in fighting in the south on Friday.

Writing on Telegram, the first deputy head of the Kherson regional council, Yuri Sobolevsky, told residents to stay away from Russian ammunition dumps, saying: “The Ukrainian army is pouring it on against the Russians and this is only the beginning.”

The Kherson region’s pro-Ukrainian governor, Dmytro Butriy, said fighting was continuing in many parts of the region, and that Berislav district, just northwest of the Kakhovka hydroelectric plant, was particularly hard hit.

“In some villages, not a single home has been left intact, all infrastructure has been destroyed, people are living in cellars,” he wrote on Telegram.

Just to the north of Lysychansk, which Moscow’s forces captured in early July after weeks of fighting, Ukrainian partisans destroyed a railway junction box near the Russian-controlled town of Svatove on Friday night, making it harder for Moscow to bring in ammunition to the front lines by train, Luhansk regional governor Serhiy Gaidai said in an online post.

Officials from the Russian-appointed administration running the Kherson region earlier this week rejected Western and Ukrainian assessments of the situation.

In an intelligence update on Saturday, Britain’s Ministry of Defence said Russia had likely established two pontoon bridges and a ferry system to compensate for bridges damaged in Ukrainian strikes.

Russian-installed authorities in occupied territories in southern Ukraine were possibly preparing to hold referendums on joining Russia later this year, and were “likely coercing the population into disclosing personal details in order to compose voting registers,” it added. read more

On Friday the British ministry described the Russian government as “growing desperate”, having lost tens of thousands of soldiers in the war. The chief of Britain’s MI6 foreign intelligence agency, Richard Moore, added on Twitter that Russia is “running out of steam”.

Ukraine and Russia have traded accusations over a missile strike or explosion early on Friday that appeared to have killed dozens of Ukrainian prisoners of war in the frontline town of Olenivka held by Moscow-backed separatists in eastern Donetsk province.

The Russian defence ministry on Saturday published a list of 50 Ukrainian prisoners of war killed and 73 wounded in what it said was a Ukrainian military strike with a U.S.-made High Mobility Artillery Rocket System (HIMARS).

Ukraine’s armed forces denied responsibility, saying Russian artillery had targeted the prison to hide the mistreatment of those held there. Foreign Minister Dmytro Kuleba said on Friday Russia had committed a war crime and called for international condemnation.

Reuters could not immediately verify the differing versions of events, but some of the deaths were confirmed by Reuters journalists who visited the prison.

U.S. Secretary of State Antony Blinken expressed his condolences in a phone call on Friday with Kuleba and said Washington was committed to “hold Russia accountable for atrocities,” the U.S. State Department said.

The United Nations is prepared to send experts to Olenivka to investigate if it obtains consent from both parties, U.N. spokesperson Farhan Haq said. The International Committee of the Red Cross (ICRC) said it was seeking access and had offered to help evacuate the wounded.

A charity linked to Ukraine’s Azov Regiment said on Telegram it was not immediately able to confirm or deny the authenticity of the Russian list of people killed and wounded.