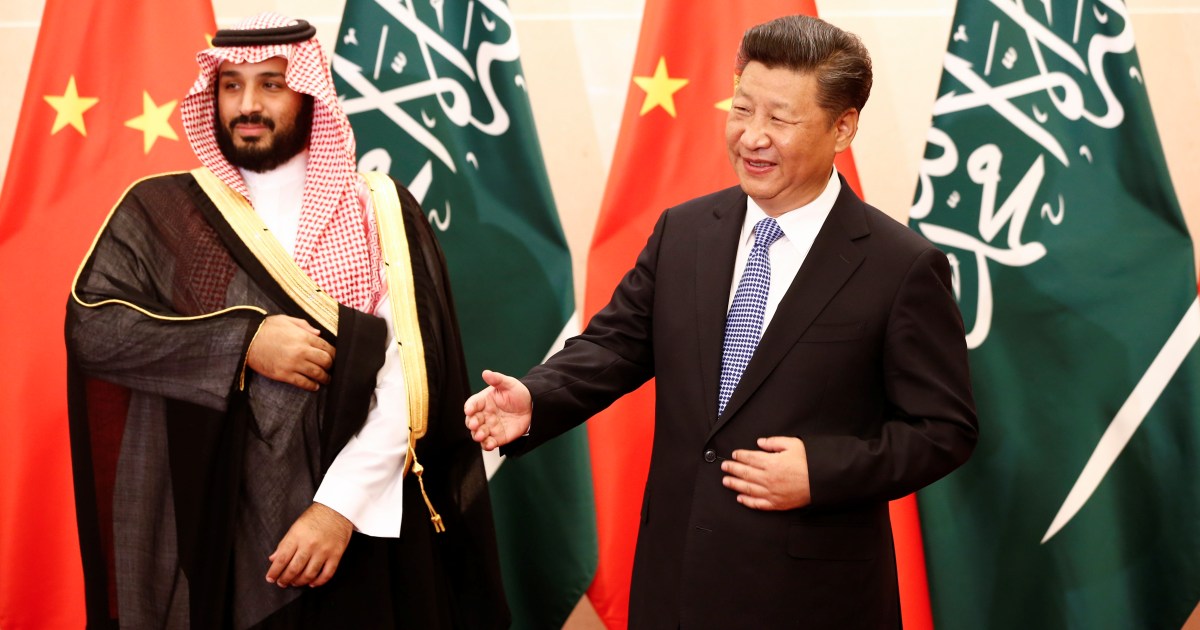 Eighteen months into his term in office, United States President Joe Biden paid his first visit to the Middle East earlier this month – a region that once sat at the centre of his country’s foreign policy.

But, even with these long-term allies, the subject of China was not far away.

“We have to … put ourselves in the best possible position to outcompete China,” Biden wrote before he embarked on the trip.

There is a growing narrative within the US foreign policy community that tends to see the Middle East as a possible flashpoint for global US-China competition, as China’s footprint has grown more visible.

From traditional collaboration areas, such as oil and gas, to the new so-called ‘health silk road’, where China uses the COVID-19 pandemic as an opportunity to provide healthcare to countries in need, the world’s second-largest economy has expanded its economic portfolio with the region and made it clear that it is here to stay.

This is laying the groundwork for more intense competition between China and the US, which sees the Middle East firmly under its global security umbrella.

“As China’s footprint has grown, there is this romanticised Orientalism towards China and this [conception of] China as a potential alternative to the US, as a wealthy power to address the issues in the region in substantive ways,” said Mohammed Turki al-Sudairi, the head of the Asian studies unit at the King Faisal Center for Research and Islamic Studies in Saudi Arabia.

Yuan to replace the dollar?

That, some argue, could push the Middle East closer to China, as the US shifts its foreign policy focus gradually away from the region, and its energy focus away from oil.

In March, Saudi Arabia was reported to be considering accepting the Chinese renminbi (yuan) in lieu of US dollars for Chinese oil sales – a major deviation from the current dollar-based international oil trading system.

Saudi Arabia is China’s top crude oil exporter: in 2021, for example, China imported 87.58 million tonnes of crude oil from the kingdom, topping the list of China’s crude importing partners, according to China’s General Administration of Customs.

Both Saudi Arabia and China see benefits from such an arrangement, according to analysts.

For China, trade in yuan would essentially protect the country from currency fluctuations and potential sanctions. On Saudi Arabia’s part, China is a major trading partner, and such a move could “demonstrate its understanding of China’s concerns,” according to Dawn Murphy, associate professor of national security strategy at the US National War College, who studies China’s relations with the Global South, including the Middle East.

Many analysts, however, believe the competition between these two major powers in the region will not necessarily lie within the energy sector, despite the Middle East’s automatic association with oil and gas in the past decades.

China’s growing authoritarianism, in stark contrast to what Biden has described as “American values”, has ignited a new round of more intense ideological competition between the US and China in the Middle East.

From its treatment of its Muslim Uighur population and its crackdown on dissidents in Hong Kong, China is “fostering support in the era of emerging multipolarity” as it grows more likely to be able to compete with the US on equal footing, according to Murphy.

“China is safeguarding domestic security by ensuring there is no support for activity in Xinjiang from other countries, including Saudi Arabia,” she said.

However, the core of the zero-sum US-China competition might end just there: the idea of the US losing its dominant role in the region to China could be overblown and China and the US’s presence in the region could easily be mutually beneficial, according to analysts.

“The idea the ‘US is at the risk of losing the Middle East to China’ is too simple,” said Guy Burton, an adjunct professor at the Brussels School of Governance, who has studied China-Middle East relations extensively.

“China has already been present [in the Middle East] for a long time, and its economic footprint has expanded beyond just the energy sector and has moved to digital, healthcare and real estate,” Burton said. “But that doesn’t mean they [Middle Eastern nations] are abandoning the US: they have good relations with the Chinese, but they don’t expect the Chinese to replace Americans.”

As is evident from Biden’s attempts to form a security alliance that would include Israel and Saudi Arabia to combat Iran, the US is still much more heavily invested in the security aspect of the region than China, and that will not change any time soon, experts said.

“China’s footprint in the Middle East is economic, and not security,” said Murphy. “It’s not stepping in that way to provide that type of engagement.”

China has benefitted considerably from the American security presence in the past: from Iraq to Kuwait, the premise of China’s expanding investment rests on that country’s security and stability. In that sense, US and Chinese interests converge in certain areas, according to Burton.

Meanwhile, China has long touted its ability to develop strong relations with different countries who are themselves sometimes opponents, most notably Saudi Arabia and Iran – two of China’s largest partners in the region.

So far, China has been very successful in sticking with its balanced foreign policy, maintaining positive relationships with countries in the region.

Beijing has signed deals with Israel and Saudi Arabia while entering a 25-year cooperation programme with Iran, and has well positioned itself to not meddle politically in a region mired in conflict.

Yet, as the US and China both grow more determined to engage in competition, it is unclear how long China can continue executing its purely economy-based foreign policy in the region.

China’s past success in maintaining a relatively neutral position has garnered support. Saudi Arabia is appreciative that China does not bother itself with Riyadh’s human rights record, and Iran is not treated as an international pariah and has some respite from sanctions.

Yet some analysts have voiced their doubt regarding the likelihood of China strictly executing that policy.

“Economically, as you invest more, you are going to become more tied to the region and more locked in, and eventually you are going to get politically sucked in,” explained Burton. “At the same time, you have Americans trying to push this new ‘Cold War narrative’ by trying to force their allies to make decisions now.”

The world is now entering a phase with a greater degree of uncertainty, and to many countries in the region, it is impractical to have to choose among some of the biggest players.

“In a region that is in a period of transition, people are not thinking in binary terms, namely either the US or China,” said al-Sudairi. “They need both.”

Sorgente articolo:
Will the Middle East be a flashpoint between the US and China? – Al Jazeera English