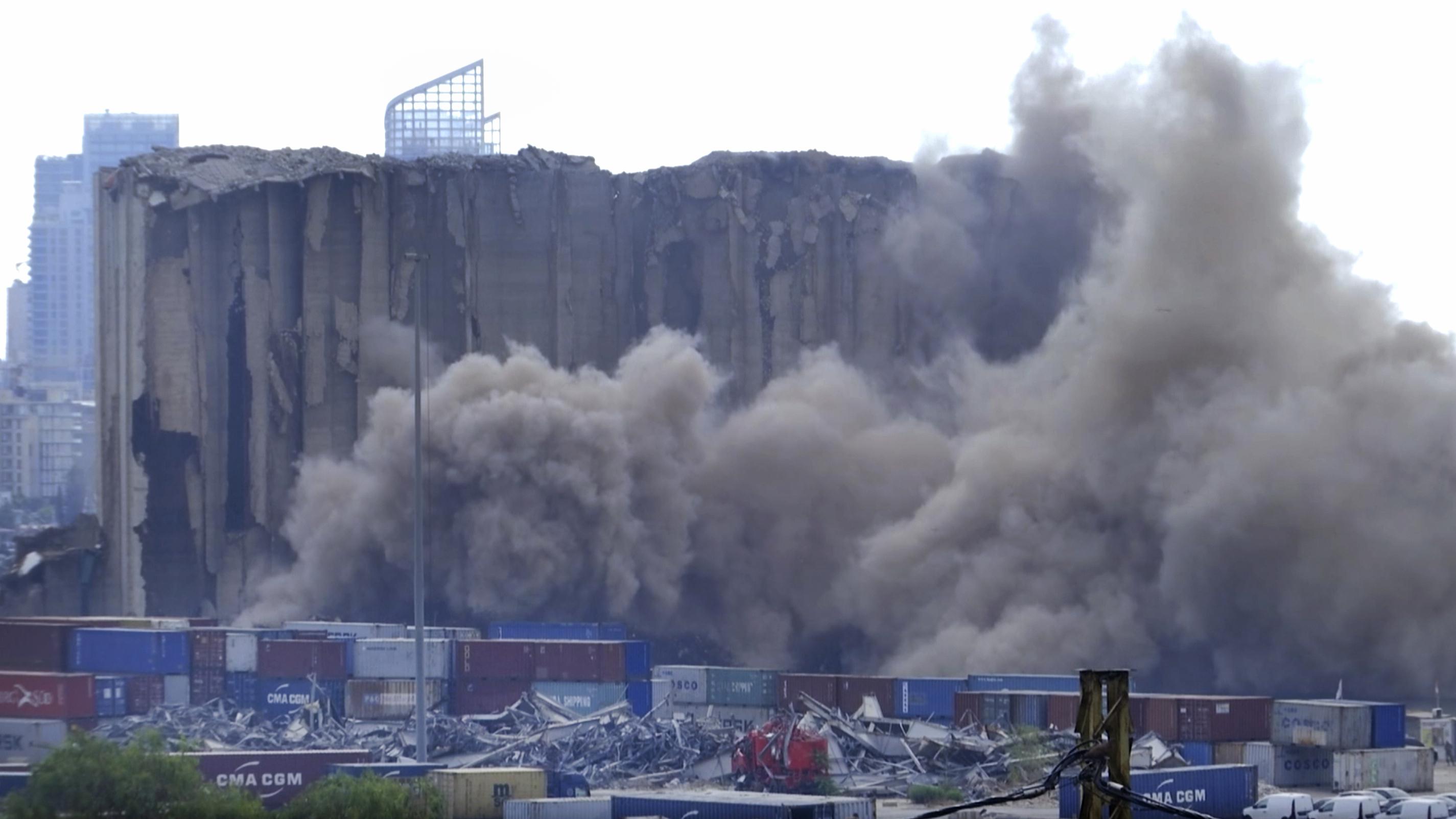 BEIRUT (AP) — A section of Beirut’s massive port grain silos, shredded in the 2020 explosion, collapsed in a huge cloud of dust on Sunday after a weekslong fire, triggered by grains that had fermented and ignited in the summer heat.

The northern block of the silos toppled after what sounded like an explosion, kicking up thick gray dust that enveloped the iconic structure and the port next to a residential area. It was not immediately clear if anyone was injured.

Assaad Haddad the General Director of the Port Silo, told The Associated Press that “everything is under control” but that the situation has not subsided yet. Minutes later, the dust subsided and calm returned.

However, Youssef Mallah, from the Civil Defense department, said that other parts of the silos’ northern block were at risk and that other sections of the giant ruin could collapse.

The 50 year-old, 48 meter (157 feet) tall silos had withstood the force of the explosion two years ago, effectively shielding the western part of Beirut from the blast that killed over 200 people, injured more than 6,000 and badly damaged entire neighborhoods.

In July, a fire broke out in the northern block of the silos due to the fermenting grains. Firefighters and Lebanese Army soldiers were unable to put it out and it smoldered for weeks, a nasty smell spreading around. The environment and health ministries last week issued instructions to residents living near the port to stay indoors in well-ventilated spaces.

The fire and the dramatic sight of the partially blackened silo revived memories and in some cases, the trauma for the survivors of the gigantic explosion that tore through the port on Aug. 4, 2020.

Many rushed to close windows and return indoors after the collapse Sunday.

Rima Zahed, whose brother died in the 2020 blast and who has been part of a survivors’ group lobbying for the preservation of the silos as a testament to the port explosion, blamed the government for not taking action to put out the weekslong fire.

“We were talking about this three weeks ago, but they chose to do nothing and leave it on fire,” she said. “This shows the state’s failure.”

When the fermenting grains ignited earlier in July, Lebanese firefighters and army soldiers had tried to put out the fire, but officials and experts told them to stop, fearing the additional moisture from the water would worsen the situation. The Interior Ministry said over a week later that the fire had spread, after reaching some electric cables nearby.

The silos continued smoldering for weeks as the stench of the fermented grains seeped into nearby neighborhoods. Residents and survivors of the explosion told the AP that seeing the smoking silos was akin to reliving their trauma of the port blast. The environment and health ministries last week instructed residents living near the port to stay indoors in well-ventilated spaces.

The Lebanese Red Cross distributed K-N95 masks to those living nearby, and officials ordered firefighters and port workers to stay away from the immediate area near the silos.

Emmanuel Durand, a French civil engineer who volunteered for the government-commissioned team of experts, told the AP earlier in July that the northern block of the silo had been slowly tilting over time but that the recent fire accelerated the rate and caused irreversible damage to the already weakened structure. He told the AP on Sunday that he sent warnings that other parts of the northern block may also collapse imminently

Durand has been monitoring the silos from thousands of miles away using data produced by sensors he installed over a year ago, and updating a team of Lebanese government and security officials on the developments in a WhatsApp group. He repeatedly warned that a collapse was imminent.

Last April, the Lebanese government decided to demolish the silos, but suspended the decision following protests from families of the blast’s victims and survivors. They contend that the silos may contain evidence useful for the judicial probe, and that it should stand as a memorial for the tragic incident.

The Beirut Port blast was one of the largest explosions in Lebanon’s troubled history. It took place less than a year after an uprising rocked Lebanon, with hundreds of thousands protesting the country’s entrenched sectarian political parties. The blast also precipitated Lebanon’s economic crisis, costing billions of dollars in damages and destroying thousands of tons of grain. Three-quarters of the population now lives in poverty.

The silos, barely standing, have since become an iconic structure in the heart of the devastated port, surrounded to this day by crushed vehicles and warehouses, and piles of debris.

Sunday’s collapse of a part of the silos’ northern section comes just days ahead of the second anniversary of 2020 explosion.

The Lebanese probe has revealed that senior government and security officials knew about the dangerous material stored at the port, though no officials have been convicted thus far. The implicated officials subsequently brought legal challenges against the judge leading the probe, which has left the investigation suspended since December.