When the final whistle blew at Wembley, Lena Oberdorf, sank to the pitch, the young player of the tournament pulling her shirt over her face to hide the tears and block out the celebrations erupting around her.

The tone, if not the scale, of the English euphoria will have been familiar to the pockets of German fans watching on, spoilt by eight previous titles. But it wasn’t to be nine.

Those victory scenes could have come half an hour earlier than they did, after substitute Ella Toone had given England a second-half lead, but Lina Magull’s equalizer ten minutes from time sent the game to extra time.

There, it was another England substitute, this time Chloe Kelly, who scuffed home the winner at the second attempt to send the biggest crowd in Euros history, men or women, in to a state of delirium as the Lionesses made history.

Things might have gone differently had video assistant referee Paolo Valeri awarded Germany a first-half penalty after a clear handball in the box, but he didn’t, much to the consternation of Voss-Tecklenburg. “I don’t understand that decision at all,” she said.

Or if substitute Tabea Wassmuth had converted her chance when one-on-one just moments after coming on after halftime. Or if Lina Magull’s effort had flown just underneath the crossbar rather than crashing back off it.

Or, perhaps most significantly, if captain Alexandra Popp hadn’t withdrawn at the last minute due to an unspecified muscle injury sustained in the warmup. “She’s an exceptional player, so of course we missed her,” Marina Hegering told DW after the game.

“Popp was in outstanding form and would have triggered something in our opponents with her very presence,” Voss-Tecklenburg lamented afterwards. “But it wasn’t to be, and making a decision of that magnitude [to pull out] deserves respect.” 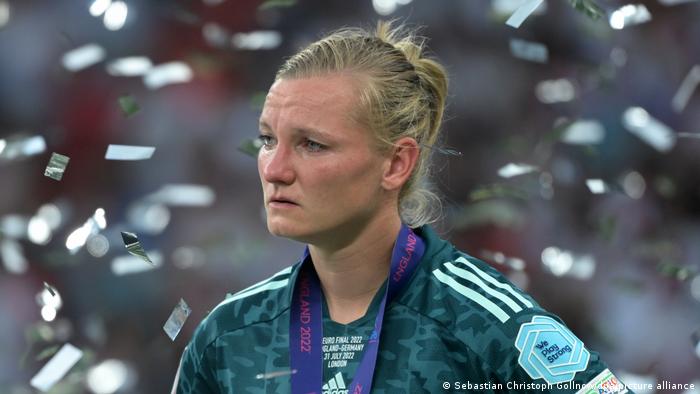 Last-minute withdrawal: Alexandra Popp pulled out injured ahead of kick-off.

Oberdorf and Germany stand their ground

In Popp’s absence, others stepped up.

England coach Sarina Wiegman said before the game she expected Germany to be “a little physical.” Her assessment was wrong only by the degree.

Oberdorf announced her physical presence to Fran Kirby in the second minute. She then roughed up Rachel Daly moments later, before teaming up with Sara Däbritz to send Fran Kirby and Georgia Stanway sprawling on to the pristine Wembley turf.

“Lena, like many others, has played an incredible tournament,” Voss-Tecklenburg told DW. “She has a great future with the way she plays football and she will continue to grow. Maybe next year at the World Cup she can offer even more offensively because she can do that too. But here [in the tournament] she worked hard for the team and went past her limits.”

Led by Oberdorf, Germany have been the most prolific foulers at Euro 2022, making 82 fouls to England’s 60.

In the first half here alone, both teams committed a combined fourteen fouls and earned three yellow cards. 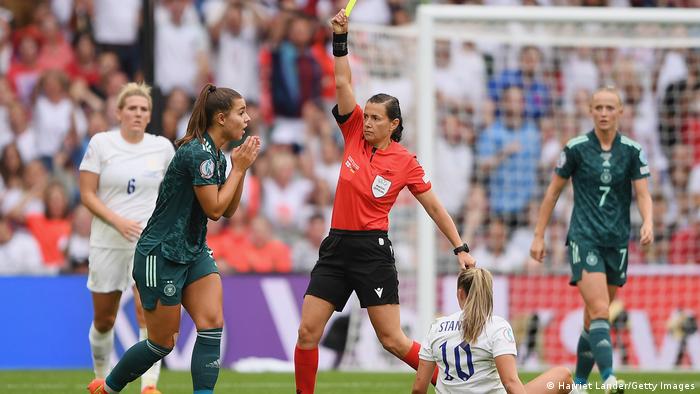 England lead: a goal scored in London but forged in Manchester

In among the kicks, tugs, shoves and clips, however, both sides had their moments, and Toone’s sumptuous opener was a goal of genuine beauty, scored in London but forged in Manchester, where England’s tournament began a few weeks ago.

Manchester City’s Keira Walsh, player of the match, stroked a precision-weighted long pass through the German defense for Toone to run on to, before calmly floating the ball over the advancing Merle Frohms.

An expectant, excited Wembley finally got up the nerve to sing the first chorus of “Football’s Coming Home” – only to be silenced by Magull, the Bayern Munich midfielder neatly converting Wassmuth’s cross at the near post.

Suddenly, Wembley was nervous and Germany looked menacing. The nation that had won eight of the last ten tournaments had earned an air of superiority, their winning experience trumping all else.

But Germany’s early progress in women’s football has stalled and others, most notably England, have overtaken them. There is little disgrace losing to an England side as good and as deeply-resourced as this one. 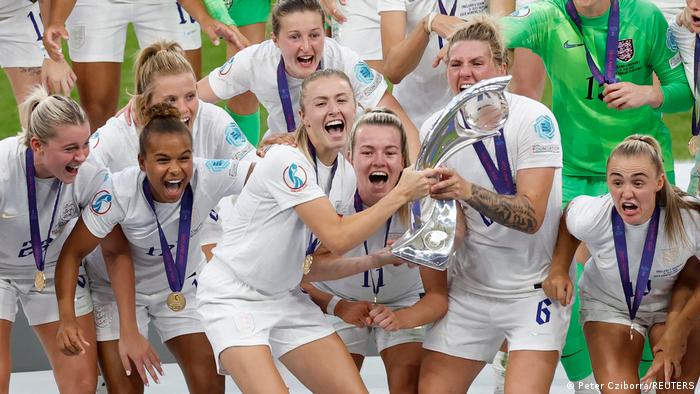 The winner may have been scrappy but it was no fluke, with the depth of quality in England’s squad becoming evident in extra time. With the tournament’s top scorer and player of the tournament Beth Mead forced off after an unusually quiet 64 minutes, another City player, Kelly, came on.

City and United are among a host of Women’s Super League clubs who have been turbocharged in recent years, largely by investment from their wealthy men’s teams.

While Bayern and Wolfsburg also remain among Europe’s best, the German Bundesliga’s depth of resources, infrastructure and quality lags behind that on offer in England, who now set to go from strength to strength.

“This will be like a catapult for women’s football in England,” said former German international and three-time Euros winner Anja Mittag. “It will explode now.”

Thanks to investment, yes, but also thanks to Ella Toone and Chloe Kelly, and a victory which will be remembered in England for a long, long time.