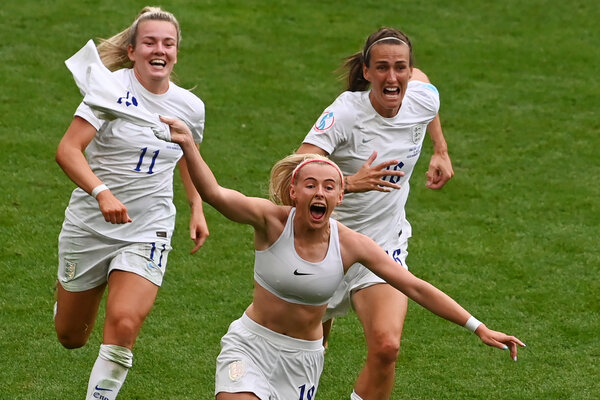 LONDON — Leah Williamson took just a moment to compose herself. Prince William had started the presentation, but Williamson, the captain of the England women’s soccer team, knew that, just this once, royalty could be made to wait. She took a breath. She absent-mindedly fixed her ponytail. She looked at her teammates, the podium and the trophy, just a little disbelievingly.

Only when she was absolutely sure she was ready did she begin the walk: the one that nobody has made for more than half a century and that at times felt like nobody would ever make again. Now here she was, a 25-year-old from Milton Keynes, a town that has long been used as a byword for bland, strolling toward glory and into history.

England’s wait for its national soccer team to win a major trophy, now ended with a 2-1 victory over Germany on Sunday, has been long and painful. Over the years since its men’s team won the 1966 World Cup, its drought has been immortalized in song and become something of a running joke, all of its designed as a palliative salve for a national ache.

It has never, though, been quite as agonizing as it was in the final 10 minutes 42 seconds of the final of the 2022 European Women’s Championship, in that eternity between Chloe Kelly’s goal that gave England the lead against Germany and the blissful trill of the whistle that confirmed its meaning: that England was, at last, champion of Europe; that football, as the song has it, had finally come home.

England’s players had spent that time drawing every last drop of energy from their exhausted bodies, not in the service of making something happen but in making sure that absolutely nothing did. The 87,192 fans — that was the announced attendance — who had come to Wembley to see the end of history whistled and sang and roared and groaned, conjuring whatever displacement activity they could think of to make the time pass just a little quicker.

They had reason to be nervous. England had swept imperiously into this final, driven by the fierce partisanship of its home crowds, a sense of destiny gathering as every step was taken and every hurdle cleared. Germany, the eight-time champion, provided a daunting final test, but Sarina Wiegman’s team had built such momentum that no obstacle seemed too steep.

That would hardly have been dispelled by the sight, as the teams lined up for the national anthems, of Alexandra Popp — Germany’s leading scorer, its captain, its totem — standing not among the starters but forlorn among the substitutes, a victim of a “muscular problem” sustained in the pregame warm-ups. The odds tilted just a little further in favor of the host with that twist, hope turned now into expectation.

That will always be the question for Germany, of course — what might have happened had Popp been fit, if it had not had to shuffle its roster at the last moment — but that is not to say that it acquiesced to fate. Germany did not, by any means, go quietly.

The first half had been a stalemate. The second quickly drifted from tense into fractious and into something closer to punishing. It had the aura of a game that might be settled by a single moment of bright, blinding light, and England found it: Keira Walsh, finally granted a pocket of air, cutting the German defense in two; Ella Toone quick-minded enough to loft the ball over Merle Frohms, the onrushing goalkeeper.

The ball seemed to take an age to fall from the sky. Part of the crowd had given it up as lost. And then it dropped, into the net, and the stadium melted into bedlam.

The euphoria proved fleeting. Less than 15 minutes later, Germany was level, a slick, incisive move finished off by the outstanding Lina Magull, drawing the song from England’s hearts and the air from its lungs. Extra time loomed. So did penalties. Whatever the gender of the participants, England has been conditioned for decades to know how that particular story ends.

This time, though, was different. Perhaps the most important victory had already been secured, long before Germany struggled to clear its lines after Lauren Hemp’s corner: Perhaps the most lasting triumph of Euro 2022 will be its impact on women’s soccer in England in particular and in Europe in general.

Perhaps its true significance will, in time, be measured by the record attendances the tournament has attracted, the vast television audiences that have tuned in to watch the games, the thousands who have bought jerseys and the millions who have engaged in fevered discussion over the relative merits of Ellen White and Alessia Russo.

Zooming out, what matters most of all is how the country — and the continent — has been captivated by the competition. Even the queen can see that. “It is my hope that you will be as proud of the impact you have had on your sport as you are of the result today,” she said in a statement published by Buckingham Palace.

But that is not really how elite sports works. These players are conscious, of course, of the need to inspire women and girls. They embrace their status as role models, their station on the vanguard of a continuing struggle. They are, though, athletes. They want, more than anything, to win. They do not want to be an example despite something; they want to be an example because of something.

It was that which kept them going as their bodies wearied and their nerves shredded. It was that which enabled Hemp to jog over to take yet another corner, when she had run herself into the ground for 110 minutes. It was that which allowed Kelly, as the ball ricocheted around the box, to react fastest, stabbing the ball home among a thicket of German legs on her second swing at it. And it was that which, in the agony of those final 10 minutes 42 seconds, inspired them to hold on.

Only then, and only once she was truly ready, did Williamson walk to the trophy, the first England captain to do so in two generations. She took it in her hands and heaved it into the air, as the fireworks exploded behind her and the cannons shot glitter into the sky. The wait, at last, was over. The pain, at last, has ended. A senior England soccer team is the champion of Europe. An England soccer team is champion of something.

Williamson was right to drag it out for a few more seconds. It was worth the wait.