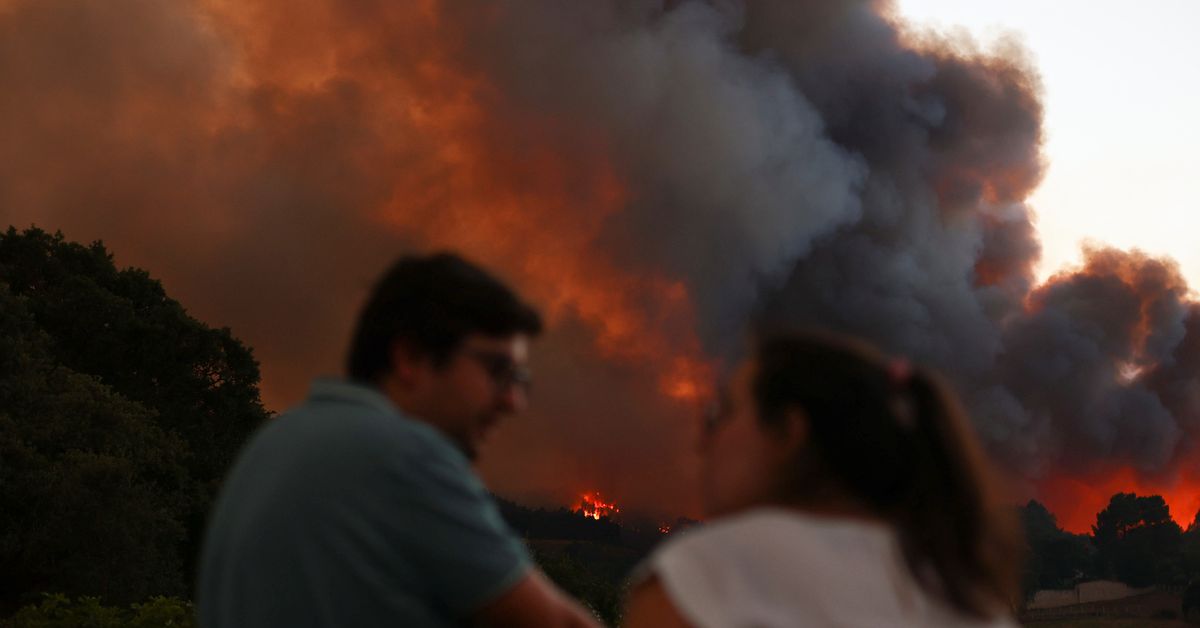 MAFRA, Portugal, July 31 (Reuters) – Hundreds of firefighters battled a blaze raging in a Portuguese municipality near the capital Lisbon on Sunday as high temperatures and strong winds made it harder to put out the flames.

Backed by water-bombers and 123 vehicles, more than 400 firefighters were brought in after a fire erupted in a mountainous area of the municipality of Mafra at around 3 p.m. local time (1400 GMT) on Sunday.

A huge cloud of black smoke billowed over the town of Venda do Pinheiro, in Mafra, with the fire forcing authorities to block several roads and evacuate a care home. Many locals left their homes out of fear.

A couple looks at each other as smoke rises from a wildfire in Venda do Pinheiro in Mafra, Portugal, July 31, 2022. REUTERS/Pedro Nunes

Smoke rising from the fire could be seen from Lisbon’s city centre, around 33 km (21 miles) south, according to a Reuters witness.

Other fires were raging elsewhere in Portugal, including in the central municipality of Ourem, where flames destroyed thousands of hectares two weeks ago. More than 1,000 firefighters were mobilised across the country.

Like other European nations, Portugal experienced a scorching heatwave in recent weeks, with temperatures exceeding 40 degrees Celsius (104°F) in various parts of the country. Although the heat has eased, temperatures are climbing again.

Weather agency IPMA said three districts in northern Portugal would be on “red alert” for extreme heat on Monday.