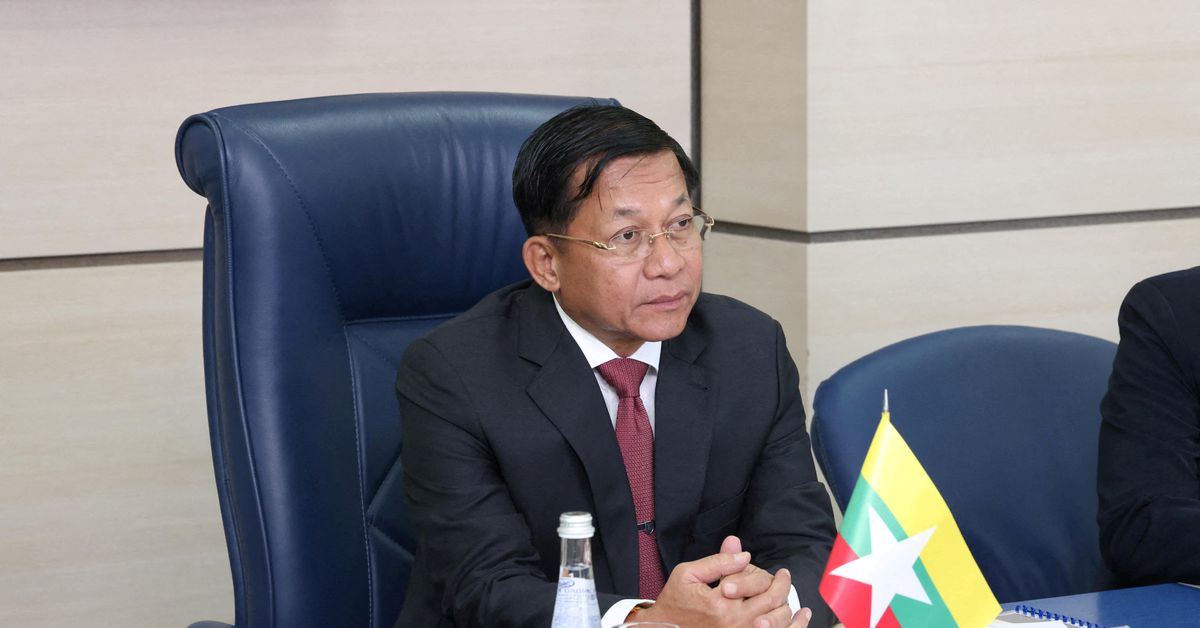 Aug 1 (Reuters) – The head of Myanmar’s junta on Monday blamed instability for stalling efforts to implement a peace plan agreed with other Southeast Asian countries as he extended emergency rule for another six months.

The junta first declared a state of emergency after seizing power from the elected government of Aung San Suu Kyi in a coup in February last year.

Myanmar has been in chaos since then, with conflict spreading after the army crushed mostly peaceful protests in towns and cities.

The 10-member Association of Southeast Asian Nations (ASEAN) agreed a five-point “consensus” to end hostilities last year, but there has been little sign of the junta implementing the five-point plan, which includes an end to violence and dialogue.

Junta leader Min Aung Hlaing said in a speech aired on state media that Myanmar had been striving to overcome the challenges of the coronavirus pandemic while facing internal violence.

“So it was difficult to implement the ASEAN consensus due to the lack of stability,” said Min Aung Hlaing, adding that only when the situation was “normal” could progress be made.

Western governments denounced the coup and the detention on various charges of Nobel laureate Suu Kyi and numerous members of her party and supporters.

Some members of ASEAN, of which Myanmar is a member and which has a tradition of non-interference in each other’s internal affairs, also criticised the generals.

While the junta has failed to implement the ASEAN plan, it has never rejected it.

“Our country is an ASEAN state so we value the conventions of ASEAN,” Min Aung Hlaing said.

While Min Aung Hlaing did not mention the extension of the emergency in his speech, state media reported that a military government defence and security council had unanimously approved his request for six more months.

The junta said it had to take power last year because of voting fraud in a November 2020 general election that Suu Kyi’s party easily won. Election monitoring groups found no evidence of mass fraud.

The military has pledged to hold new elections in August 2023 though the timetable has already slipped and opponents do not believe it would be free and fair.

Security forces have killed more than 2,100 people since the coup, according to the Assistance Association for political prisoners, an activist group. The junta has said such tolls are exaggerated.

The true picture of the violence has become more difficult to assess since lightly armed People’s Defence Forces have sprung up to take on the army, often in more remote areas where ethnic minority insurgents are also fighting the military.

In his speech, Min Aung Hlaing blamed “terrorists” for inflicting casualties. The military has branded as “terrorists” its armed opponents and a rival shadow National Unity Government set up by pro-democracy politicians.

The junta has faced sanctions from many Western countries and last week saw further condemnation after the execution of four democracy activists it accused of “terror acts”. read more

Min Aung Hlaing also brought up the economy, which has slumped since the pandemic and as the coup ended a decade of reform.

“I think progress can be seen within six months,” he said, citing the prospect of more jobs and a focus on farming.

The World Bank projects Myanmar’s economy will grow 3% this fiscal year following an 18% contraction last year and warned that a return to pre-pandemic levels was unlikely in the near term.