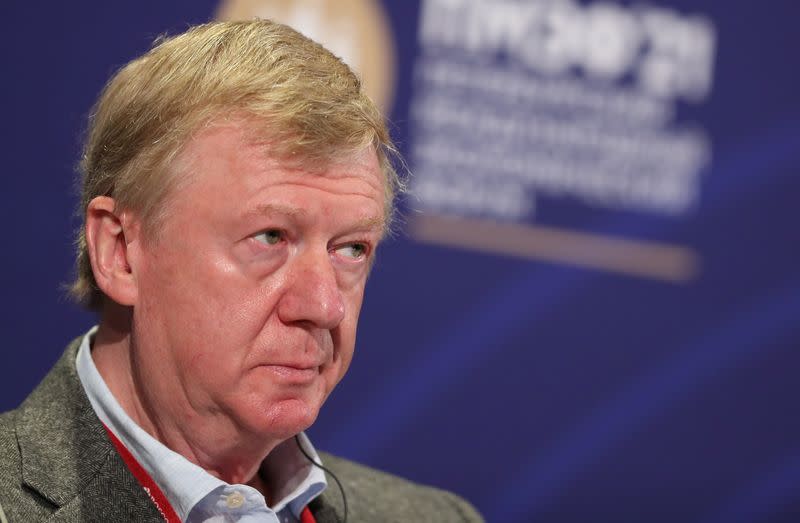 LONDON (Reuters) -Anatoly Chubais, the former privatisation tsar of post-Soviet Russia who quit his post as a Kremlin special envoy due to the war in Ukraine, is in intensive care in Europe with a rare immune disorder, two sources close to Chubais told Reuters.

Chubais, 67, believes he is suffering from Guillain–Barre syndrome, a disease caused by the immune system damaging the peripheral nervous system, said the sources.

“He thinks it’s a disease,” the first source told Reuters on condition of anonymity. “Doctors say they found it in time.”

A European intelligence agency is looking into the case but has not disclosed the results yet, that source said. Some media and opposition activists had speculated that Chubais could have been poisoned.

“I don’t think it is poisoning,” said a second source, who also spoke on condition of anonymity. “He’s still in intensive care.”

The second source said that Chubais’s wife, Avdotya Smirnova, was at his side. Chubais cannot walk but can talk, the source said.

Guillain-Barre is a serious condition that in a minority of cases can cause life-threatening problems such as severe breathing difficulties or blood clots.

Chubais’s illness was first reported by Russian reporter and political activist Ksenia Sobchak. Chubais could not be immediately be reached for comment. It was unclear exactly where in Europe he was hospitalised.

Kremlin spokesman Dmitry Peskov said the news of Chubais’s illness was sad and wished him a speedy recovery.

Chubais, who once served as former President Boris Yeltsin’s chief of staff, was President Vladimir Putin’s special representative for ties with international organisations before his resignation.

Reuters reported on March 23, almost a month after Russia invaded Ukraine, that Chubais had quit his post and left the country.

The most powerful of a group of Russian economists who sought to cement the transition to capitalism after the 1991 fall of the Soviet Union, Chubais sold off some of Russia’s biggest industrial assets in the 1990s.

(Reporting by Reuters; editing by Guy Faulconbridge and Mark Trevelyan)