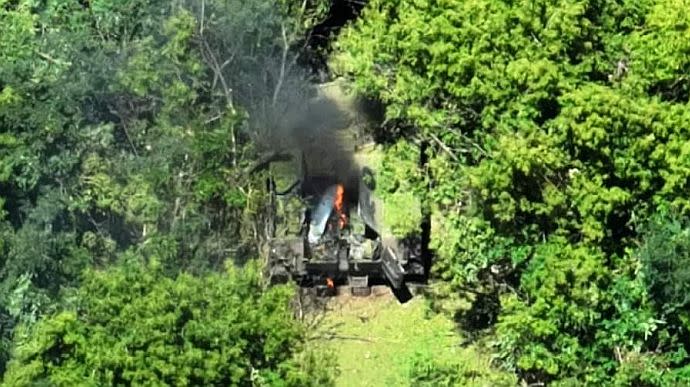 The Ukrainian military killed a reconnaissance group of Russians on the Sloviansk front, and also repelled the Russian assault on the Bakhmut front. Fighting continues on the Avdiivka front.

Source: General Staff of the Armed Forces of Ukraine on Facebook, information as of 18:00 on 1 August

Near Mazanivka, the Armed Forces of Ukraine exposed and killed the Russian reconnaissance group.

In the area of Yakovlivka, Russian occupying forces tried to conduct reconnaissance by means of a reconnaissance group. The occupiers were discovered and suffered losses. Surviving members of the group fled in panic.

Russian occupying forces tried to improve the tactical position in the areas of Soledar, Vershyna and Bakhmut with assaults, but they were unsuccessful and retreated.

On the Avdiivka front, Russian occupying forces shelled near Novokalynove, Novobakhmutivka, Pisky, and Krasnohorivka. They carried out an airstrike near New-York. They conducted assaults on the Avdiivka and Pisky fronts without success, and hostilities continue.

On the Kramatorsk front, given significant losses of manpower and military equipment, and the low morale and the psychological state of Russian military personnel, the occupying forces did not conduct active offensive actions.

Russian forces shelled Ukrainian troop positions and civil infrastructure in the areas of Siversk, Kryva Luka, Serebrianka, Ivano-Darivka, Hryhorivka, Zvanivka, Verkhnokamianske and Spirne using tubed and rocket artillery and tanks. Airstrikes were carried out near Serebrianka and Hryhorivka. For the purpose of reconnaissance of logistics support routes and critical infrastructure objects, they conducted aerial reconnaissance using a UAV.

Russia did not undertake active combat operations on the Novopavlivka or the Zaporizhzhia fronts. They conducted systematic shelling of civilian and military infrastructure in the areas of Marinka, Pavlivka, Novosilka, Novopil, Malynivka, Huliaipole, Huliaipilske, Orikhiv and Kamianske.

Ukrainian soldiers stopped all attempts by the occupiers to advance on the Marinka front. Russian occupying forces conducted aerial reconnaissance with the aim of detecting Ukrainian troops and adjusting fire. They continue to regroup, trying to strengthen their troops in the south of Ukraine.

On the Pivdennyi Buh front, the main efforts of Russian occupying forces are currently focused on holding occupied positions and preventing the advance of Ukrainian units.

Russian forces conducted shelling from tubed and rocket artillery and tanks along the contact line. They carried out airstrikes near Bila Krynytsia and Andriivka, and conducted aerial reconnaissance using a UAV.

Engineering units of the Russian occupying forces are trying to restore destroyed and damaged bridges and bridge crossings across the Dnipro River.

On the Kharkiv front, Russian occupying forces carried out artillery shelling of the districts of Kharkiv, Prudianka and Nove and 14 other towns and cities. A Russian reconnaissance group tried to expose the firing positions of the Ukrainian troops, but they did not succeed and retreated.

On the Sivershchyna front, Russian occupying forces fired tubed and rocket artillery at civilian infrastructure in the areas of Senkivka and Lypkivka in Chernihiv Oblast and in Stara Huta, Pavlivka, Pokrovka and Bilopilla in Sumy Oblast. They conducted aerial reconnaissance using a UAV near Hremiach and Hlukhiv. In order to elude intelligence technology, they deployed radio-electronic warfare complexes.