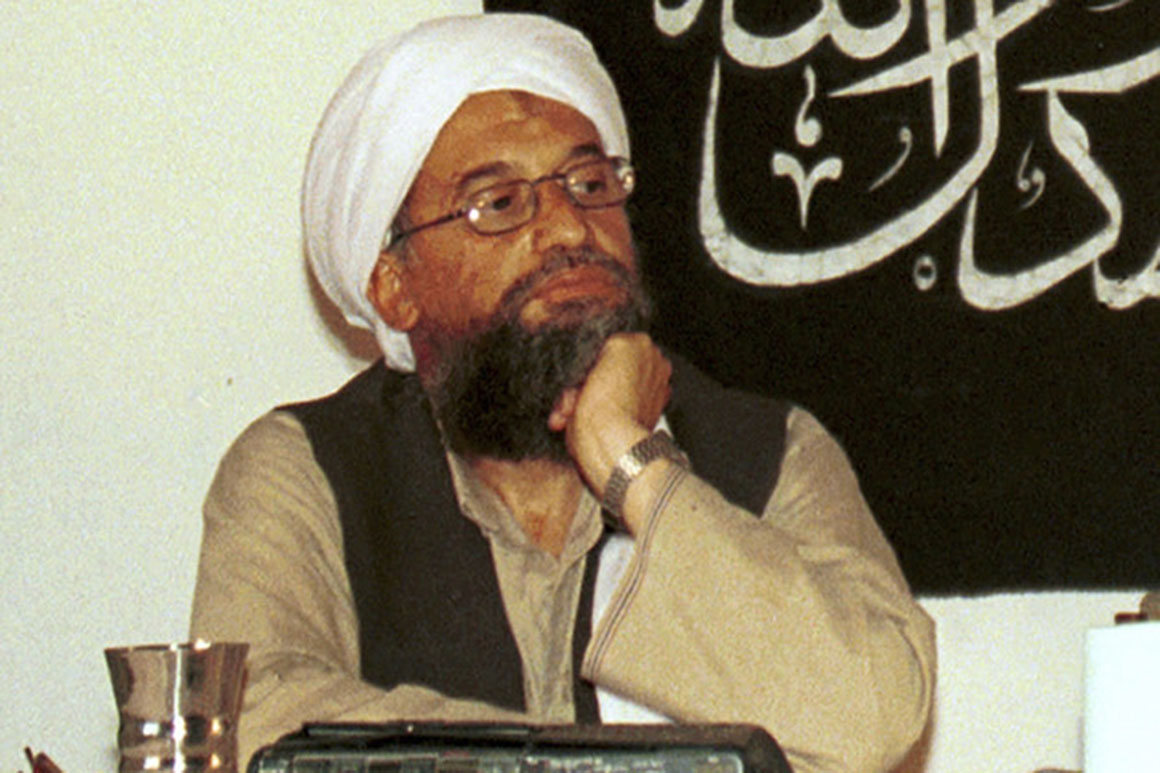 Al-Zawahri more than anyone shaped al-Qaida, first as bin Laden’s deputy since 1998, then as his successor. Together, he and bin Laden turned the jihadi movement’s guns to target the United States, carrying out the deadliest attack ever on American soil — the Sept. 11, 2001, suicide hijackings.

The attacks on the World Trade Center and Pentagon made bin Laden America’s Enemy No. 1. But he likely could never have carried it out without his deputy. Bin Laden provided al-Qaida with charisma and money, but al-Zawahri brought tactics and organizational skills needed to forge militants into a network of cells in countries around the world.

Their bond was forged in the late 1980s, when al-Zawahri reportedly treated the Saudi millionaire bin Laden in the caves of Afghanistan as Soviet bombardment shook the mountains around them.

“Al-Zawahri was always bin Laden’s mentor, bin Laden always looked up to him,” says terrorism expert Bruce Hoffman of Georgetown University. Al-Zawahri “spent time in an Egyptian prison, he was tortured. He was a jihadi from the time he was a teenager.”

When the 2001 U.S. invasion of Afghanistan demolished al-Qaida’s safe haven and scattered, killed and captured its members, al-Zawahri ensured al-Qaida’s survival. He rebuilt its leadership in the Afghan-Pakistan border region and installed allies as lieutenants in key positions.

He also reshaped the organization from a centralized planner of terror attacks into the head of a franchise chain. He led the assembling of a network of autonomous branches around the region, including in Iraq, Saudi Arabia, North Africa, Somalia, Yemen and Asia. Over the next decade, al-Qaida inspired or had a direct hand in attacks in all those areas as well as Europe, Pakistan and Turkey, including the 2004 train bombings in Madrid and the 2005 transit bombings in London. Twice, the al-Qaida affiliate in Yemen tried to attack on U.S. soil with an attempted 2009 bombing of an American passenger jet and an attempted package bomb the following year.

But even before bin Laden’s death, al-Zawahri was struggling to maintain al-Qaida’s relevance in a changing Middle East.

He tried with little success to coopt the wave of uprisings that spread across the Arab world starting in 2011, urging Islamic hard-liners to take over in the nations where leaders had fallen. But while Islamists gained prominence in many places, they have stark ideological differences with al-Qaida and reject its agenda and leadership.

As al-Qaida’s leader, al-Zawahri also faced the challenge of the explosive rise of the Islamic State group, an even more radical rival that drew away recruits with its dramatic capture of much of Syria and Iraq. IS’s “caliphate” was brought down by a U.S.-led campaign after years of fighting, but the jihadist movement was irrevocably splintered and al-Qaida lost much of its luster in radicals’ eyes.

Al-Zawahri was also a more divisive figure than his predecessor. Many militants described the soft-spoken bin Laden in adoring and almost spiritual terms.

In contrast, al-Zawahri was notoriously prickly and pedantic. He picked ideological fights with critics within the jihadi camp, wagging his finger scoldingly in his videos. Even some key figures in al-Qaida’s central leadership were put off, calling him overly controlling, secretive and divisive.

Some militants whose association with bin Laden predated al-Zawahri’s always saw him as an arrogant intruder.

“I have never taken orders from al-Zawahri,” Fazul Abdullah Mohammed, one of the network’s top figures in East Africa until his 2011 death, sneered in a memoir posted on line in 2009. “We don’t take orders from anyone but our historical leadership.”

It was during his years leading Egypt’s Islamic Jihad militant group in the 1990s that al-Zawahri honed the skills he would bring to al-Qaida.

He was born June 19, 1951, the son of an upper-middle-class family of doctors and scholars in the Cairo suburb of Maadi. His father was a pharmacology professor at Cairo University’s medical school and his grandfather, Rabia al-Zawahri, was the grand imam of Al-Azhar University, a premier center of religious study.

From an early age, al-Zawahri was enflamed by the radical writings of Sayed Qutb, the Egyptian Islamist who taught that Arab regimes were “infidel” and should be replaced by Islamic rule. He began his life of militancy at age 15, when he created an underground cell of high school students to oppose the government.

In the 1970s, as he earned his medical degree as a surgeon, he was active in militant circles. He and others formed Islamic Jihad and began trying to infiltrate the military. At one point, he even stored weapons in his private medical clinic.

As he has told it in his writings, his first trip to Afghanistan in 1980 to treat Islamic fighters battling Soviet forces opened his eyes to new possibilities.

He called that Afghan war “the training course preparing Muslim mujahedeen youth to launch their upcoming battle with the great power that would rule the world: America.”

Then came the 1981 assassination of Egyptian President Anwar Sadat by Islamic Jihad militants. The slaying was carried out by a different cell in the group — and al-Zawahri has written that he learned of the plot only hours before the assassination.

But he was arrested along with hundreds of other militants and served three years in prison. During his imprisonment, he was reportedly tortured heavily, a factor some cite as turning him more violently radical.

After his release in 1984, al-Zawahri returned to Afghanistan and joined militants from across the Middle East fighting alongside the Afghans against the Soviets. He courted bin Laden, who became a heroic figure for his financial support of the mujahedeen.

Al-Zawahri followed bin Laden to his new base in Sudan, and from there he led a reassembled Islamic Jihad in a violent campaign of bombing attacks aimed at toppling Egypt’s U.S.-allied government.

In the most daring attack, Jihad and other militants tried to assassinate Egyptian President Hosni Mubarak during a 1995 visit to Ethiopia. Mubarak escaped the hail of gunfire on his motorcade, and his security forces all but crushed the militant movement in Egypt in the crackdown that followed.

Although the Egyptian movement failed, its tactics lived on in al-Zawahri.

He promoted the use of suicide bombings, to become al-Qaida’s hallmark. He plotted a 1995 suicide car bombing of Egypt’s embassy in Islamabad that killed 16 people — presaging the more devastating 1998 al-Qaida bombings of the U.S. embassies in Kenya and Tanzania that killed more than 200, an attack al-Zawahri was indicted for in the United States.

In 1996, Sudan expelled bin Laden, who took his fighters back to Afghanistan, where they found a safe haven under the radical Taliban regime. Once more, al-Zawahri followed.

Their bond was sealed when bin Laden, al-Zawahri and other militant leaders issued the “Declaration of Jihad against Jews and Crusaders,” announcing the United States was Islam’s top enemy and instructing Muslims it was their religious duty to “kill the Americans and their allies.”

A series of spectacular attacks followed: the bombings of U.S. embassies in Africa, the 2000 suicide bombing of the USS Cole off Yemen, and finally the 9/11 attacks.

When the U.S. invaded Afghanistan in retaliation, al-Zawahri and bin Laden fled into Pakistan. A U.S. airstrike killed al-Zawahri’s wife and at least two of their six children in the southern Afghan city of Kandahar. The CIA came tantalizingly close to possibly capturing al-Zawahri in 2003 and killing him in 2004. The CIA thought it finally had al-Zawahri in its sights in 2009, only to be tricked by a double agent who blew himself up, killing seven agency employees and wounding six more in Khost, Afghanistan.

But ultimately, al-Zawahri never reached his long-term goals for jihad that he outlined in his writings — to hurt the U.S. with “as many casualties as possible” while seizing control of a country from which to establish a “caliphate” across the Muslim world.

Still, he vowed to continue hitting Americans in the video eulogy to his slain boss.

Bin Laden “terrified America in his life,” he said, and “will continue to terrify it after his death.”

Sorgente articolo:
Al-Zawahri, an Egyptian surgeon who became a mastermind of jihad against the West – POLITICO