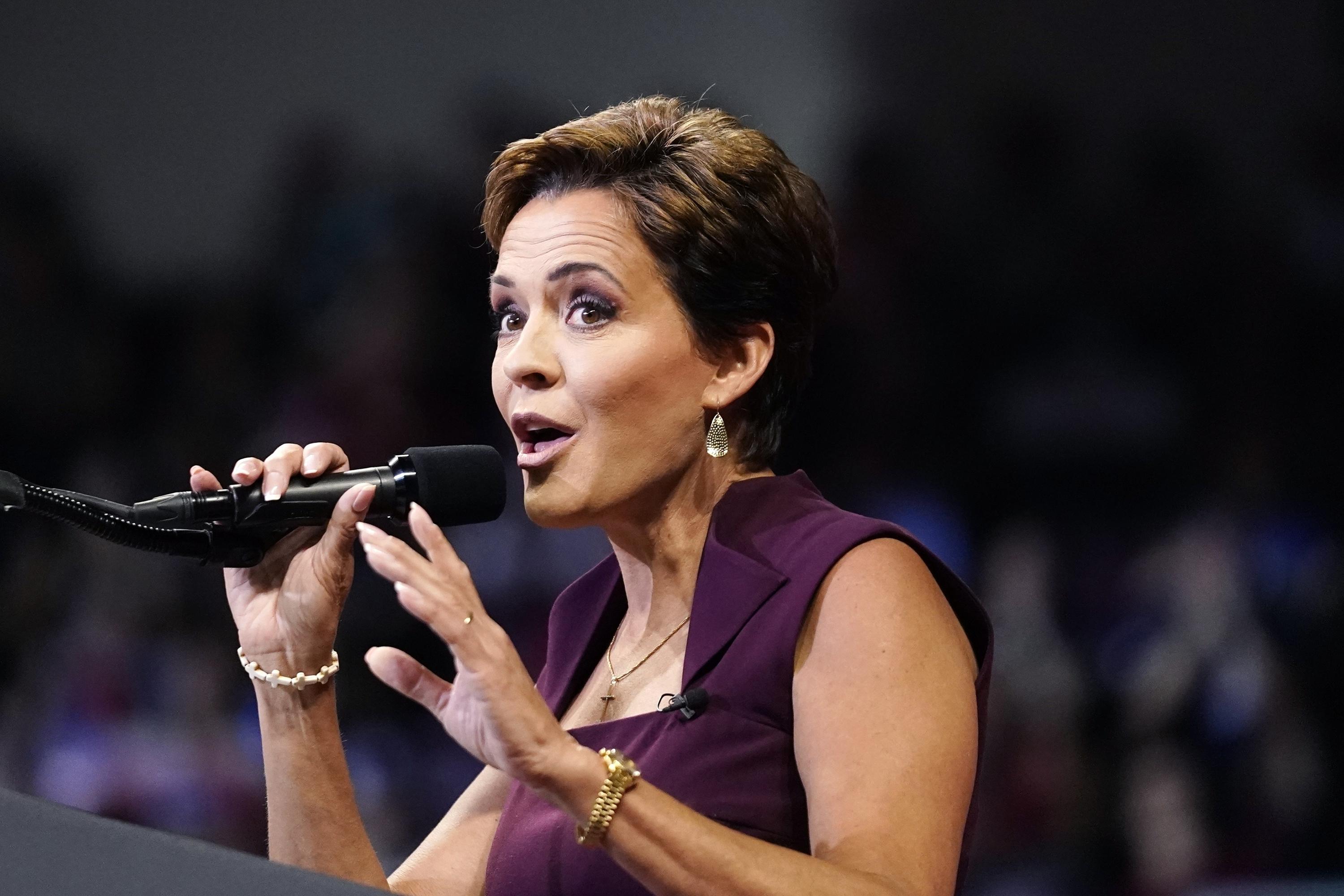 PHOENIX (AP) — The Republican Party’s embrace of Donald Trump’s election lies will be tested on Tuesday as voters in Arizona choose between candidates who say they wouldn’t have certified the results of the 2020 campaign and those who argue it’s time to move on.

The former president has endorsed and campaigned for a slate of contenders who support his falsehoods, most prominently former television news anchor Kari Lake in the race for governor. Lake, who says she would have refused to certify President Joe Biden’s narrow Arizona victory, faces Karrin Taylor Robson, a lawyer and businesswoman who says the GOP should focus on the future despite an election she has called “unfair.”

And in the race to oversee elections as secretary of state, Trump is also backing a state lawmaker who was at the U.S. Capitol on Jan. 6 and claims the former president was cheated out of victory.

As the midterm primary season enters its final stretch this month, the Arizona races are poised to provide important clues about the GOP’s direction. Victories by Trump-backed candidates could provide the former president with allies who hold sway over the administration of elections as he considers another bid for the White House in 2024. Defeats, however, might suggest openness in the party to a different path forward.

“I think the majority of the people, and a lot of people that are supporters of Trump, they want to move on,” said former Arizona Gov. Jan Brewer, who is backing Robson. “I mean, that was two years ago. Let’s go. Let’s move.”

Other closely watched races on Tuesday include the Republican contests for Michigan governor and Missouri senator. Voters in Kansas will be the first to weigh in on abortion rights since the U.S. Supreme Court revoked a woman’s constitutional right to an abortion. And two Republican House members from Washington state who voted to impeach Trump are facing primary challengers.

But the contests are especially salient in Arizona, a longtime Republican stronghold that has become more favorable to Democrats in recent years because of explosive growth in and around Phoenix. The primary and the fall election will provide insight into whether Biden’s success here in 2020 was a onetime event or the onset of a long-term shift away from the GOP.

With such high stakes, Arizona has been central to efforts by Trump and his allies to cast doubt on Biden’s victory with false claims of fraud.

Federal and state election officials and Trump’s own attorney general have said there is no credible evidence the election was tainted. The former president’s allegations of fraud were also roundly rejected by courts, including by judges Trump appointed. A hand recount led by Trump supporters in Arizona’s largest county found no proof of a stolen election and concluded Biden’s margin of victory was larger than the official count.

Though Trump is still the most popular figure inside the GOP, his efforts to influence primary elections this year have yielded mixed results. His preferred candidates in states such as Ohio and Pennsylvania prevailed in their primaries.

But in Georgia, another state that is central to Trump’s election lies, his handpicked candidate for governor was defeated by more than 50 percentage points. Georgia’s Republican secretary of state was also renominated over a Trump-backed primary rival.

The former president is hoping he’ll have more success in Arizona, where the incumbent governor, Doug Ducey, can’t run for reelection. That could give Trump a better opportunity than in Georgia to influence the winner.

Lake is well known in much of the state after anchoring the evening news in Phoenix for more than two decades. She’s now running as a fierce critic of the mainstream media, which she says is unfair to Republicans, and other enemies of Trump’s Make America Great Again Movement, including the McCain family.

A vocal supporter of Trump’s election lies, Lake says her campaign is “already detecting some stealing going on” in her own race, but she has repeatedly refused to provide any evidence for the claim.

Robson, whose housing developer husband is one of the state’s richest men, is largely self-financing her campaign. The GOP establishment, growing increasingly comfortable creating distance from Trump, has rallied around her over the past month with a series of endorsements from Ducey, former New Jersey Gov. Chris Christie and former Vice President Mike Pence.

The groundswell of establishment support for Robson has drawn national scrutiny to a race for what it says about the GOP base ahead of the crucial presidential primary in two years.

“Everyone wants to try to make this some kind of proxy for 2024,” said Christie, who ran for president in 2016. “Believe me, I’ve been through enough of these to know that 2024 will be decided by the people who step up to the plate and ’24 and how they perform or don’t perform at that time.”

On the Democratic side, Secretary of State Katie Hobbs is the front-runner against Marco Lopez, a former mayor of Nogales and border enforcement official during President Barack Obama’s administration.

As Arizona’s top elections official, Hobbs endeared herself to Democrats with an impassioned defense of the integrity of the 2020 election, a stance that has drawn death threats. However, she’s been weighed down by a discrimination case won by a Black policy adviser from Hobbs’ time in the Legislature.

In the Senate race, Trump is backing Blake Masters, a 35-year-old first-time candidate who has spent most of his career working for billionaire Peter Thiel, who is bankrolling his campaign. Masters is emphasizing cultural grievances that animate the right, including critical race theory and allegations of big tech censorship.

Until Trump’s endorsement, the race had no clear front-runner between Masters, businessman Jim Lamon and Attorney General Mark Brnovich, all of whom jockeyed for his support.

Lamon says Trump made a mistake in endorsing Masters and is digging into his own fortune to highlight Masters’ ties to technology firms and his writings as a college student supporting open borders. Lamon signed a certificate falsely stating that Trump had won Arizona in 2020 and that he was one of the state’s “duly elected and qualified” electors.

Trump soured on Brnovich and may have torpedoed his campaign when the attorney general’s election fraud investigation failed to produce criminal charges against election officials.

The eventual winner in the primary will take on incumbent Democratic Sen. Mark Kelly in the fall.

The Republican race for secretary of state includes Mark Finchem, a Trump-backed candidate who was at the Capitol on Jan. 6, and Shawnna Bolick, a state lawmaker who has pushed for legislation allowing the Legislature to overturn the will of the voters and decide which candidate gets the state’s 11 electoral votes for president. The GOP establishment has rallied around advertising executive Beau Lane, who says there were no widespread problems with the 2020 election.

Republican state House Speaker Rusty Bowers, who gave testimony to the House Jan. 6 committee about Trump’s pressure campaign following the 2020 election, faces a Trump-backed challenger in his bid to move up to the state Senate.