“It is one of the only times in the women’s game I’ve seen a training-ground bust-up,” Willie Kirk, who coached Chloe Kelly at Everton, tells The Athletic after the 2022 European Championship final.

“It was two players just desperate to win, going hard into a real meaty challenge and a little bit of afters. Chloe and one of the players had a couple of kicks at each other, they were squaring up, but it finished very quickly. It just showed how competitive they were.

“That’s a good way to sum her up: fire and ice. She takes penalties under pressure, definitely has ice in her veins and plays with a lot of fire.”

This time last year, Kelly couldn’t bear to watch Team GB at the Tokyo Olympics on TV as she sat at home recovering from rupturing her right anterior cruciate ligament, an injury sustained in May 2021.

Fast forward a year and the 24-year-old has just written herself into the history books as the matchwinner of England’s 2-1 Euro 2022 victory over Germany. In the 110th minute, the second-half substitute latched onto a loose ball with her outstretched right foot and toe poked it home. 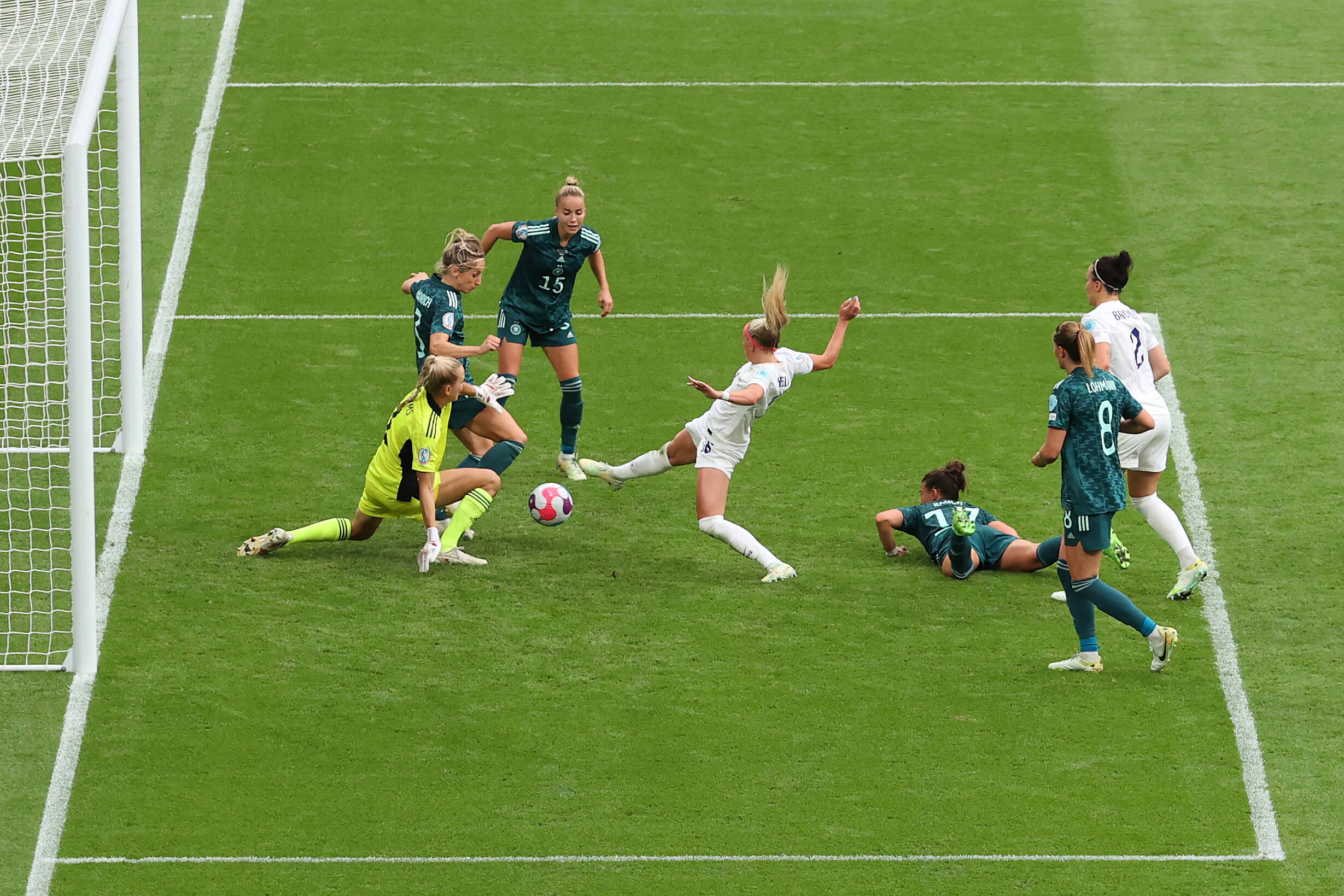 Kelly went to peel off her top, paused to check if the goal had been given, then stripped off, whirling her shirt around her head Brandi Chastain style. The USWNT player had done the same after scoring the decisive penalty in the 1999 World Cup final against China.

I see you @Chloe_Kelly98 well done. Enjoy the free rounds of pints and dinners for the rest of your life from all of England. Cheers!

“I just went mental,” Kelly says, an England cowgirl hat perched on top of her head.

“I didn’t know what to do. I didn’t think about it or plan it. It was all right though, weren’t it?”

All right? That goal celebration will go down in footballing history.

As a child, Kelly grew up in Ealing, west London, and used to get the No 92 bus to Wembley on FA Cup final day just to buy a matchday programme and return home again. At the age of 16, the Queens Park Rangers fan returned to the stadium and witnessed Bobby Zamora’s late winner in the 2014 Championship play-off final against Derby County.

“I said to my family this morning, ‘There’s going to be a Bobby Zamora moment today’, and there was,” Kelly smiles.

The youngest of seven siblings, there was no doubt Kelly would become extremely competitive. Her five older brothers — Daniel, the oldest, then Jack, followed by triplets Ryan, Jamie and Martin — brought their little sister to play football with their friends in cages in inner-city London. Unable to compete with the boys physically, the Elthorne Park school pupil soon learned to use tricks to get out of trouble. Kelly began at childhood club Queens Park Rangers before moving to Arsenal’s centre of excellence.

From QPR played with @Anna_Filbey99 @Rianna_Dean98 So Proud of them today winning the FA youth cup well done girls❤️ pic.twitter.com/sNWDUpHGs7

The influence of Kelly’s brothers on her competitive nature was plain to see. “She’d have a full-on huff if she lost a game in training,” says Kirk.

“She is focused, determined and competitive against opponents, but also within herself.”

Despite this laser-focus concentration, Sunday’s goal celebration didn’t come as a surprise to the former Everton manager. Kelly is known to be “quite outgoing” but also “calm and collected”, a player who would also celebrate goals in training, such was her competitiveness.

“With a player like Chloe, you just have to give them freedom and licence to play because she is so creative and exciting.”

In the 2019-20 season, Kelly recovered from ankle surgery to score nine goals in 12 games, finishing as Everton’s top goalscorer as they finished sixth in the Women’s Super League.

“Technically, she moved with the ball very well,” saysKirk. “She has great balance, which is a nightmare for defenders. If you were under pressure in your own half, she would just take it on the run. They don’t know if she’s going inside or outside, she can shift the ball quickly with both feet. She is really unpredictable. When you stop her from going inside to shoot on her right, she will go on the outside and put a cross in with her left. 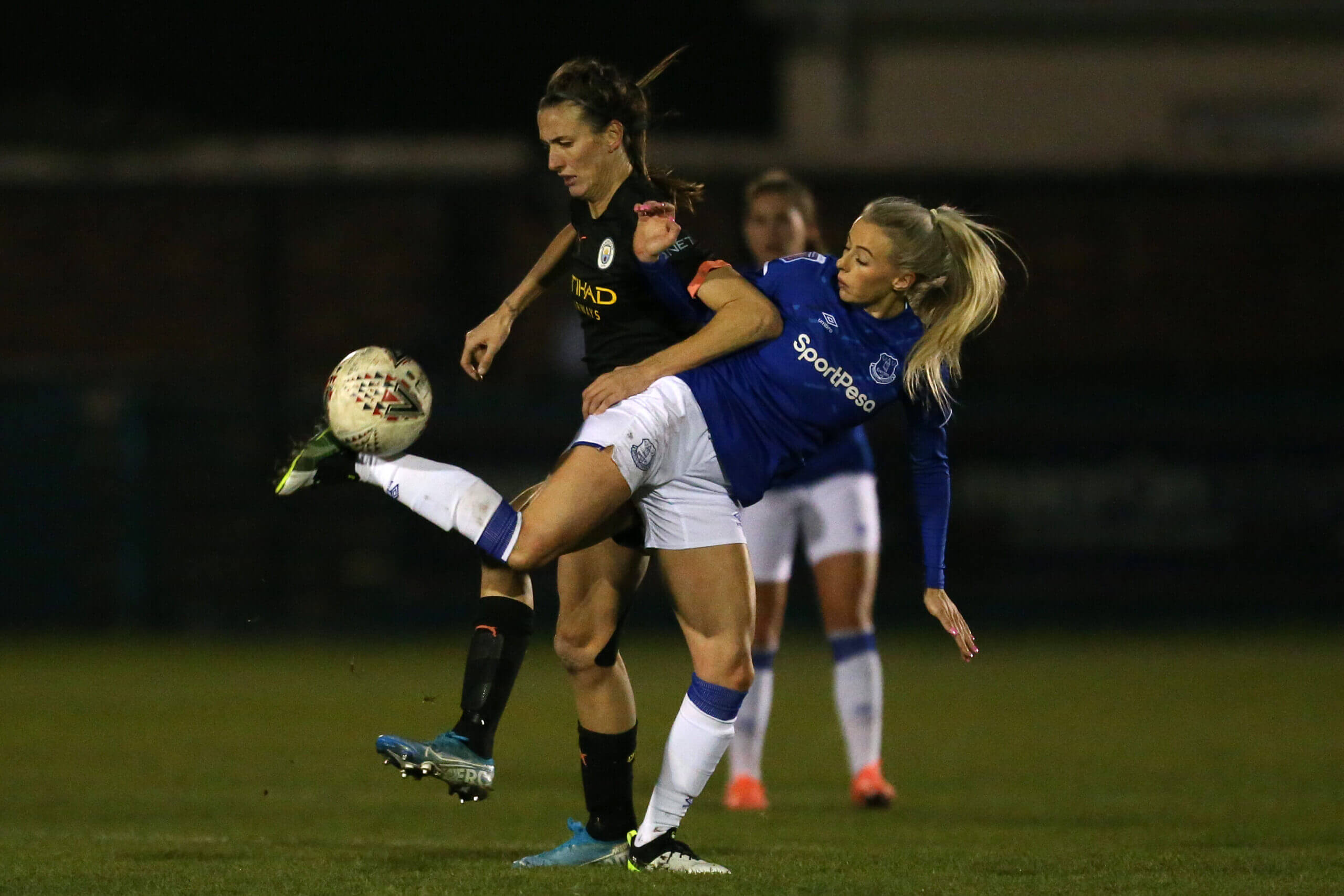 Kelly controls the ball under pressure from her England team-mate Jill Scott in a match against Manchester City (Photo: Lewis Storey/Getty Images)

“We changed our kick-off so that she would just take it on the dribble straightaway. Half the time, she would buy a foul 10 yards inside their half within seconds, putting you on the front foot from the start.

“One thing I liked about her was that she would get kicked so often, but would never be scared to want the ball again. She just wanted the ball all the time.”

When Kelly signed a two-year deal with Manchester City in 2020, she left a massive hole in Everton’s attack. Every move went through her and Kirk was “gutted” when she left. She continued her fine form under City boss Gareth Taylor, registering 16 goals and 14 assists in 34 appearances in her first season.

In the penultimate game of the 2020-21 season, however, Kelly tore her ACL, a crushing blow for the Olympic hopeful. It would be a race against time to see if she could be fit enough for this summer’s delayed Euros.

Operation was a success 👊🏻 Day 1️⃣ of the road to recovery 💪🏼✨ pic.twitter.com/sOkXMz5QoZ

“I was there in the dark days when we were both on the bike, almost in tears, sweating and struggling to watch all the girls go and play for England, even at Wembley,” says former City team-mate Lucy Bronze, who was also recovering from injury and joined Kelly for boxing sessions as part of their rehabilitation.

“We were missing out on so many games. I came back a lot sooner and she had a mountain to climb. I stood by her side and watched her climb that mountain every second of the way.”

After 11 months out, Kelly returned to the field on April 2 and had six weeks to convince England manager Sarina Wiegman to name her in the provisional Euro 2022 squad.

“When the squad was announced, Chloe was the first one I wanted to congratulate,” says Bronze. “For her to get the winner tonight, I am so proud and know how much it means to her.”

She fired off a few speculative shots during the Euros but her decisive goal — and that iconic celebration — will be all that anyone remembers. 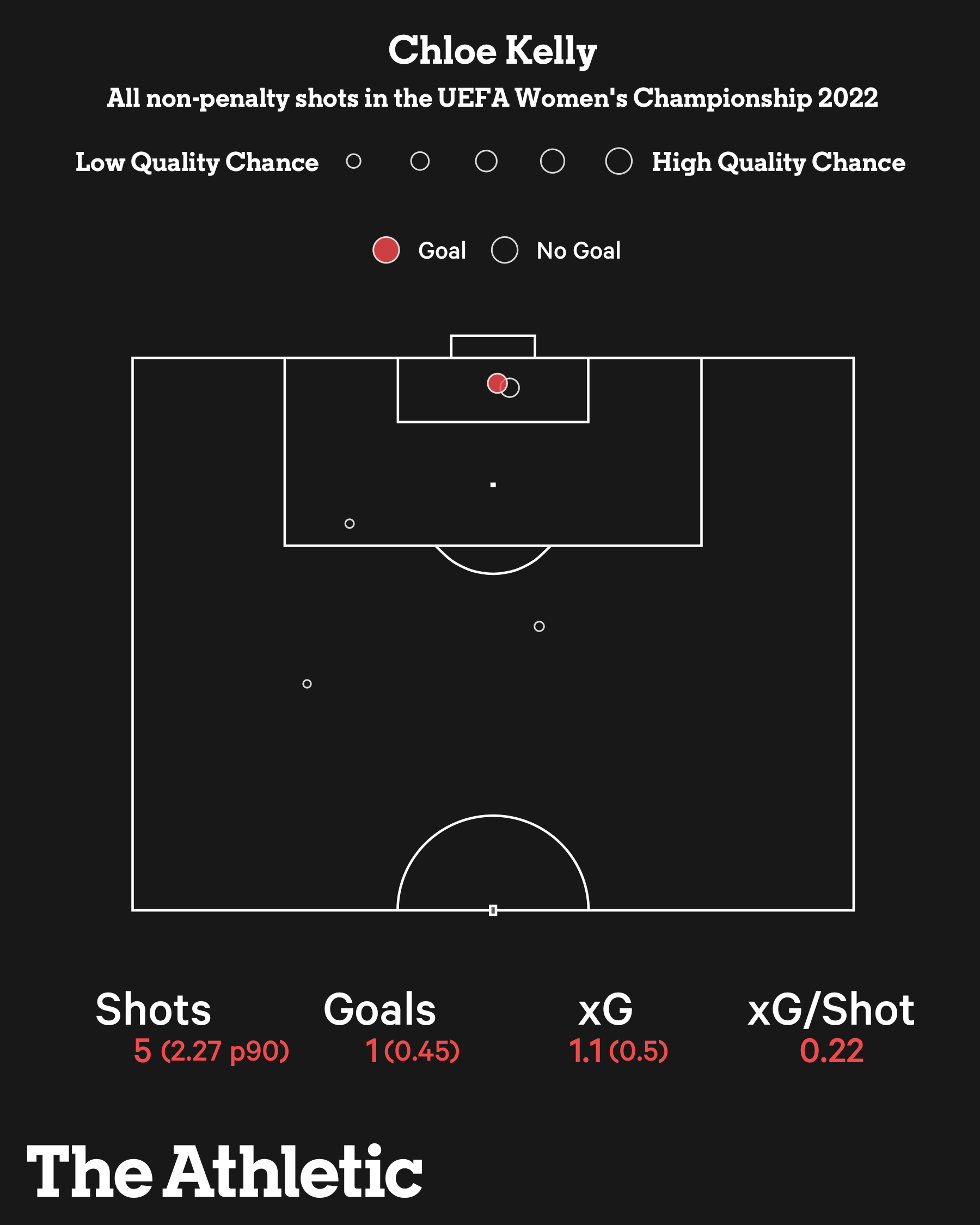 “I don’t feel the pressure, honestly. Since my injury, I don’t fear anything,” says Kelly.

“It just shows an ACL injury doesn’t define someone’s career. You don’t know what is round the corner and it was this,” she smiles looking down at her gold European medal.

“Thank you to everyone who played a part in my rehab because I always believed I could be here, but to score the winner, wow!”

The best is yet to come from Kelly. Her fluidity, free-spirited nature, creativity and willingness to beat players is born for the international stage.

“We need more of that in this country,” says former Chelsea winger Gemma Davison. “Out of all the wingers that England have, she is the new generation. She is the player I would pay to watch every week.”

Sorgente articolo:
England hero Chloe Kelly: An iconic celebration and the perfect blend of fire and ice – The Athletic