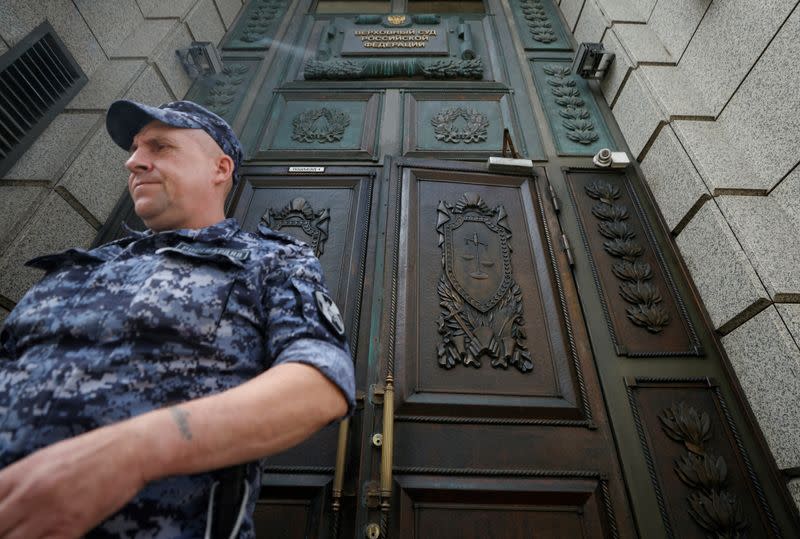 MOSCOW (Reuters) -Russia’s top court on Tuesday designated Ukraine’s Azov Regiment as a terrorist group, a Reuters correspondent in the courtroom said, paving the way for captured soldiers to be tried under stringent anti-terror laws and be jailed for up to 20 years.

The Azov Regiment, which has far-right and ultra-nationalist roots, has been one of the most prominent Ukrainian military formations fighting against Russia in eastern Ukraine. Having begun as a paramilitary unit fighting against pro-Russian rebels in 2014, it was later integrated into Ukraine’s national guard.

In a statement, the Azov Regiment said that Russia was looking for new justifications for war crimes, and urged the U.S. State Department to designate Russia a terrorist state.

Russia has regularly cited Azov in support of its assertion that Ukraine is controlled by “fascists”. Russian state media has compared Azov fighters to World War Two-era Nazis, whose defeat by the Soviet Union remains a core part of Russian national identity.

Previously based in the eastern Ukrainian port city of Mariupol, many of the regiment’s personnel were captured by Russian forces when the city fell in May after an almost three-month-long siege.

Officials in the Donetsk People’s Republic, the Russian-backed entity which claims Mariupol as part of its territory, said in May that captured Azov Regiment fighters could face the death penalty under the self-proclaimed republic’s laws.

Last week, Russia’s embassy in London said in a Twitter post that captive Azov personnel should be hung and that they “deserve a humiliating death”.

(Reporting by Reuters; editing by Guy Faulconbridge and Tomasz Janowski)