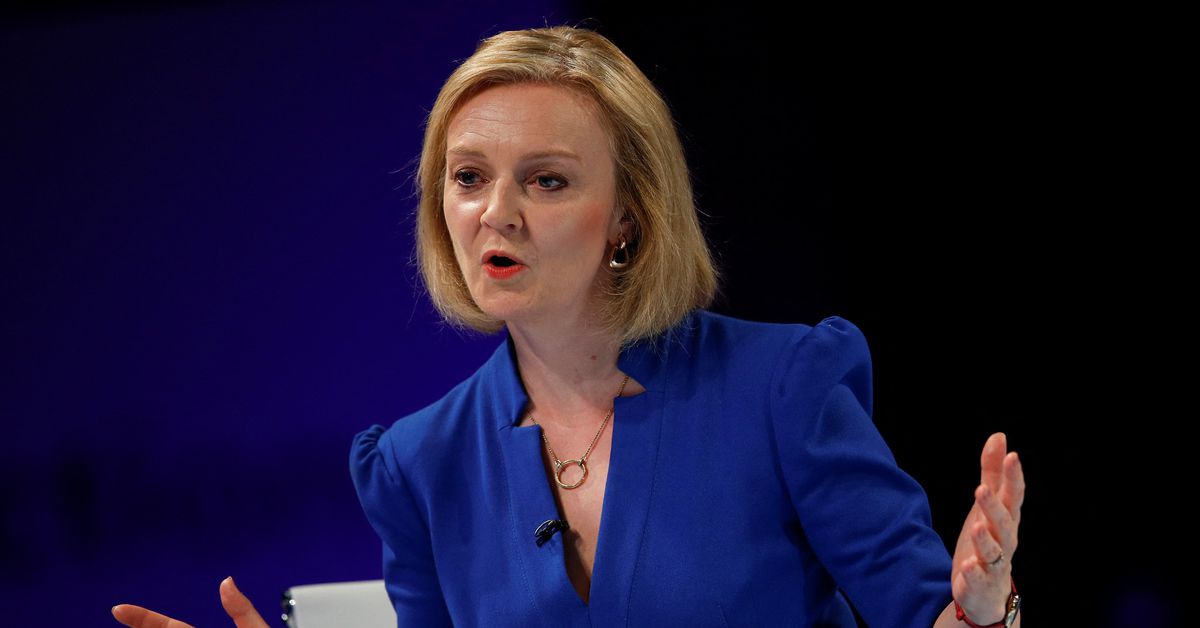 LONDON, Aug 2 (Reuters) – British foreign minister Liz Truss, the front-runner to replace Boris Johnson as prime minister, was forced to backtrack on one of her most striking pledges a day after announcing it following a backlash from fellow Conservatives and opposition parties.

In the first big misstep of her campaign, Truss set out plans to save billions of pounds a year in government spending in a pledge opponents said would require cutting the pay of public sector workers, including nurses and teachers, outside of the wealthy southeast of England.

Truss had said late on Monday that she would introduce regional pay boards rather than having a national pay agreement, tailoring pay to the local cost of living.

But after criticism on Tuesday, Truss said: “I never had any intention of changing the terms and conditions of teachers and nurses. But what I want to be clear about is I will not be going ahead with the regional pay boards.”

The U-turn came as opinion polls showed widely varying pictures of the extent of Truss’s lead over rival Rishi Sunak.

A survey of 807 Conservative Party members by Italian data company Techne carried out July 19-27 found Truss was backed by 48%, compared with 43% for former finance minister Sunak.

By contrast, a YouGov poll for The Times newspaper, carried out from July 29 to Aug. 2, showed Truss had extended her lead. She had support from 60% of members versus 26% for Sunak, with the remainder of the 1,043 members polled either undecided or not planning to vote.

Shortly before the latest poll, the Daily Mail newspaper – one of Britain’s best-selling titles, and popular among Conservative voters – said it was endorsing Truss, despite her U-turn.

“Mr Sunak is a natural technocrat, albeit a clever one; Miss Truss an authentic standard-bearer for low-tax, small-state Conservatism,” the newspaper said in an editorial.

The Conservatives won the biggest majority in three decades at the 2019 national election by upending conventional British politics and winning in more industrial areas in central and northern England with a pledge to reduce regional inequalities.

One Truss-supporting Conservative lawmaker said the miscalculation would damage the rest of the campaign.

“This was a completely avoidable error, but I don’t think in the end it will stop her being prime minister,” he said.

Sunak supporter Ben Houchen, the Conservative mayor of Tees Valley in northeast England, said he was “speechless” at the proposal.

Millions of nurses, police officers and soldiers would have had their pay cut by 1,500 pounds ($1,830) a year, Sunak’s campaign said.

“This latest mess has exposed exactly what Liz Truss thinks of public sector workers across Britain,” she said.

Sunak and Truss are competing for the votes of about 200,000 Conservative members who will select the next prime minister, with the winner announced Sept. 5.

Taxes have dominated the campaign race so far. Sunak has accused Truss of being “dishonest” with voters over her promises of immediate tax cuts, saying he would wait until inflation is under control before cutting taxes. Truss says that would push the country into recession.

Over 60% of Conservatives in the Techne poll said Truss had better ideas on tax and inflation than Sunak. They also favoured her immigration plans.

However, respondents said Sunak had better policies on Brexit and energy.

The YouGov poll showed a majority backed Truss on the cost of living, migration and defence.

John Curtice, a professor of politics at the University of Strathclyde and one of Britain’s leading polling experts, said it was hard to be certain the race was over for Sunak.

“In a race which certainly had seen some fairly radical and bold proposals made by both candidates … we certainly don’t know what impact if any it (has) had on the Tory membership as a whole,” he told broadcaster GB News.