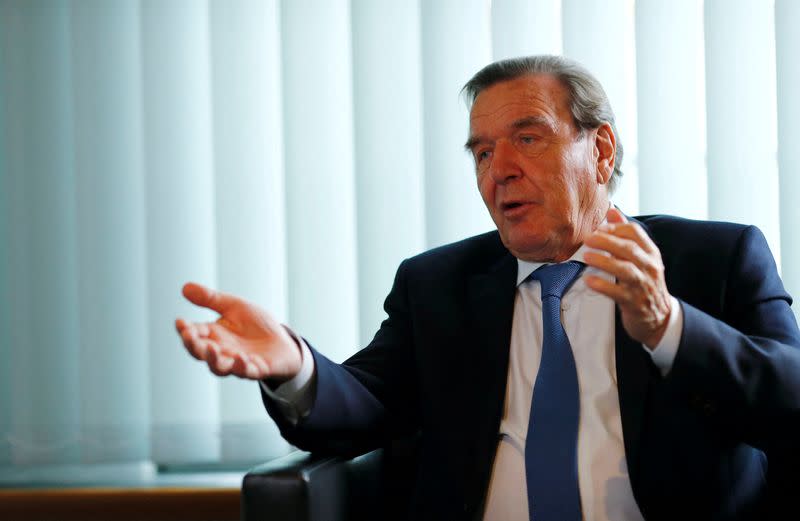 “The good news is that the Kremlin wants a negotiated solution,” Schroeder told Stern weekly and broadcasters RTL/ntv, adding he had met Putin in Moscow last week.

“A first success is the grain deal, perhaps that can be slowly expanded to a ceasefire,” he said.

Russia and Ukraine struck a deal last month to unblock grain exports from Black Sea ports and the first ship carrying Ukrainian grain to world markets since Moscow’s invasion five months ago is on its way to Lebanon.

Schroeder said solutions to crucial problems such as Crimea could be found over time, “maybe not over 99 years, like Hong Kong, but in the next generation”. He said an alternative to NATO membership for Ukraine might be armed neutrality, like Austria.

The future of the Donbas region of eastern Ukraine, the scene of fierce fighting, however, was more complicated.

“A solution based on the Swiss cantonal model will have to be found,” he said, adding it would have to be seen if Putin would go back to a pre-war “contact line” in a ceasefire.

Schroeder, chancellor from 1998 to 2005, has criticised the war in Ukraine but refused to condemn Putin, whom he still calls a close personal friend. Distancing himself from Putin now would not help the situation, he said.

Increasingly derided in Germany for his pro-Russia stance, Schroeder has been stripped of his right to a publicly funded office.

A champion of the Nord Stream pipeline which carries Russian gas to Germany under the Baltic Sea, Schroeder is chairman of the shareholders’ committee of Nord Stream AG, operator of the pipeline majority-owned by Russia’s Gazprom, according to LinkedIn.

After intense criticism, Schroeder in May stood down from the board of Russia’s state-owned oil company Rosneft and declined a nomination for a board position at Gazprom.