ROME (AP) — Italians debated Sunday whether a Nigerian street vendor could have been saved from a fatal attack by an enraged Italian man that played out in public as bystanders watched. Mourners left flowers and placards denouncing the violence and the indifference of those nearby.

On Friday, as strollers promenaded along a bustling shopping street in Civitanova Marche, an Italian town on the Adriatic Sea, Alika Ogorchukwu, 39, was left for dead after first being struck with his own crutch and then pummeled furiously by the suspect.

“Four-minute long horror,” headlined Corriere della Sera, noting that other Nigerian immigrants in the town had decried the indifference and racism seen in the killing.

Video footage of the attack has circulated on Italian news websites and social media.

A judge on Monday will rule if the alleged attacker, identified by police as Filippo Claudio Giuseppe Ferlazzo, 32, should remain jailed during the investigation.

Police investigator Matteo Luconi told reporters on Saturday that the assailant went after the vendor following “insistent” requests by Ogorchukwu to the suspect and his female companion for pocket change. The slain man’s lawyer said he was attacked after complimenting the woman’s beauty.

A brutal murder in #CivitanovaMarche : a #Nigerian hawker was beaten to death. The victim’s name was Alika Ogorchukwu. pic.twitter.com/fuiTiEGOU9

An autopsy will help determine if Ogorchukwu died from the beating or possibly was strangled as he lay on his back, his attacker on top of him and striking him.

During a popular talk show on Italian state radio Sunday, listeners called in to decry the indifference of at least two bystanders who filmed the event and the fear the attack generated.

One listener recalled a young man beaten to death by a gang of Italian youths near Rome in 2020 when he tried to defend a friend and subdue a fight. A court recently convicted four Italians, sentencing two of them to life in prison, for the killing of Willy Monteiro Duarte, a cook whose family originated from Cape Verde.

On Sunday, people paused at the spot where Ogorchukwu died, leaving flowers and tying placards to a tree, including one denouncing “violence, racism, indifference.”

Some radio listeners were indignant that two bystanders used their phones to film the attack and no one apparently tried to pull the suspect off his victim. The police said some did call to report an attack in progress, but by the time help arrived, Ogorchukwu was dead.

One caller asked the host what would he have done if he were there. 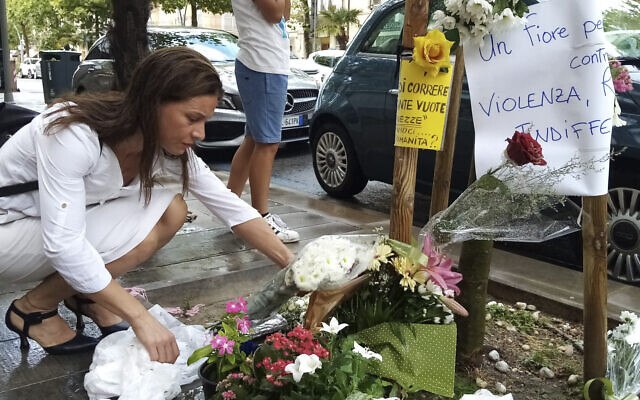 A woman places a bouquet of flowers where the Nigerian street vendor Alika Ogorchukwu has been murdered, in Civitanova Marche, Italy, July 30, 2022. (AP/Chiara Gabrielli)

“I would have kicked him,” replied Mario Sechi, director of the Italian news agency AGI.

The attack comes as Italian politicians begin campaigning for an early parliamentary election on September 25. The anti-migrant head of the right-wing League party, Matteo Salvini, has made immigration as well as protecting citizens from violent crime his top issues.

On Sunday, Salvini in a tweet contended that his center-left opponents were exploiting the Nigerian’s death to “accuse me, the League, and millions of Italians of racism. Squalid.”

Archbishop Rocco Pennacchio, whose diocese includes Civitanova Marche, decided that in place of homilies, several minutes of silence would be held at Sunday’s Masses.

The mayor of the nearby San Severino Marche, where Ogorchukwu lived with his wife, son, and niece, said the town would pay for the funeral. Italian media said local citizens also started fundraising to help his widow.