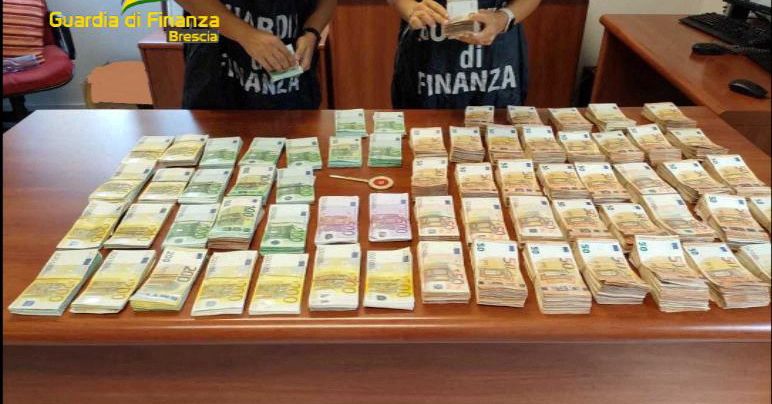 Members of Italy’s tax police stand by a display of money seized during an operation involving assets worth over 141 million euros ($144 million), which a source familiar with the matter said were seized from an architect linked to Russian President Vladimir Putin who is accused of allegedly breaking Italian tax rules, in Brescia, Italy, in this picture released on August 3, 2022. Guardia di Finanza/Handout via REUTERS

ROME, Aug 3 (Reuters) – Italy’s tax police have seized assets worth over 141 million euros ($144 million) from an architect who designed a luxury estate on the Black Sea which has been dubbed “Putin’s palace” by opponents of the Russian president.

The tax police sent a statement earlier on Wednesday saying it had seized the assets from a “well-known professional” in Brescia, a town in northern Italy, citing alleged tax offences.

Two sources told Reuters the assets belonged to Lanfranco Cirillo, who designed a grand estate on the Black Sea in Russia that became known as “Putin’s palace” due to claims by a businessman that the property was built for Russian President Vladimir Putin.

A lawyer for Cirillo confirmed that his client’s assets had been seized but said he was not guilty of any wrongdoing regarding Italian taxes, adding he had based himself in Russia for many years and been granted Russian citizenship in 2014.

“The architect, who is in Moscow, is very disappointed by the fact that having bought some prestigious properties and works of art in Italy, and having provided for his wife and daughter are used to argue that he faked his move abroad,” lawyer Stefano Lojacono said in a statement.

A helicopter, luxury properties, cash, jewels and important works of art were among the items seized, according to the tax police in Brescia.

President Putin has denied any link to the luxury property on the Black Sea. The issue surfaced again early in 2021 when jailed Kremlin critic Alexei Navalny made an online video claiming that Putin was its ultimate owner.

In an interview with Italian televison in April, Cirillo said he had designed the building but that it was commissioned by a private group and he had had no dealings with Putin.

“It’s madness to think that the president of such an important country would need to build a palace for himself,” Cirillo said in the interview on Italy’s La7.